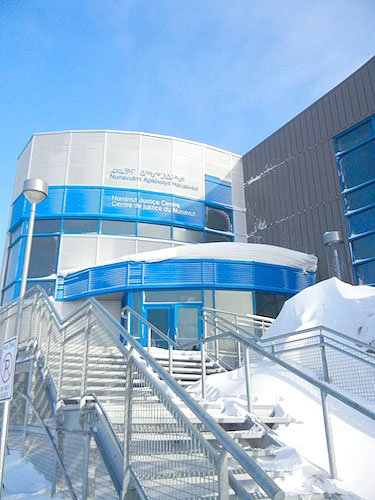 The second-degree murder trial of Brandon Lyta, accused of killing Levi Michael in 2020, continues at the Nunavut Court of Justice in Iqaluit. (File photo)

The morning after Levi Michael died in Iqaluit in May 2020, the man now accused of killing him voluntarily took police back to the location where their confrontation took place, an Iqaluit courtroom heard Friday.

Brandon Lyta, who was 23 at the time, is charged with second-degree murder in the May 15, 2020 death of Levi Michael.

During the fourth day of Lyta’s trial at the Nunavut Court of Justice, Crown lawyer Steven Hayward presented the court a video and audio recording made by the RCMP that shows officers driving in a police vehicle the morning of May 17. Lyta is in the back of the vehicle.

In the video, officers instruct Lyta to take them through the events of May 15 as part of a “re-enactment” of the night.

Although Lyta is not visible in the video, his voice is audible from the back of the vehicle as he speaks to officers and guides them up to the city’s Road to Nowhere area, to the 4100 block.

At one point, an officer asks if Lyta wants to get out of the vehicle when they get to the scene.

“I don’t think I want to do that so soon,” Lyta replies in the video.

The recording starts with audio-only inside the Iqaluit RCMP detachment, where Lyta was held after his arrest.

In the recording, Lyta recounts for officers the events of the night before when he and Michael got into a fight.

“He started hitting me … He started swinging, that’s when I struck him,” Lyta said.

In a video shown to the court Thursday, Lyta tells police he killed Michael in self-defence.

In the video, Lyta told officers he feared he was going to die if he kept getting hit by Michael.

Lyta said as Michael swung a crowbar at him, he simultaneously wielded a knife and stabbed Michael.

In the recording shown Friday, the video turns on as police reach the area by Road to Nowhere, where Lyta had allegedly encountered Michael running down his apartment stairs to confront him.

Lyta is heard in the video pointing out to police where the knife might be after he threw it away that night. The area shown in the video is near a small shed and a white snowmobile in the Road to Nowhere area.

Abbott said police spent about 40 minutes searching the area that morning, but did not find a knife or a crowbar.

The video cuts out as the police drive with Lyta back into town, but the audio continues. Lyta tells the officers he contemplated suicide after the killing, saying he didn’t think Michael was going to die.

“I was in a state of disbelief that he succumbed to his injuries,” Lyta said.

The judge-alone trial continues Monday at the Nunavut Court of Justice in Iqaluit.