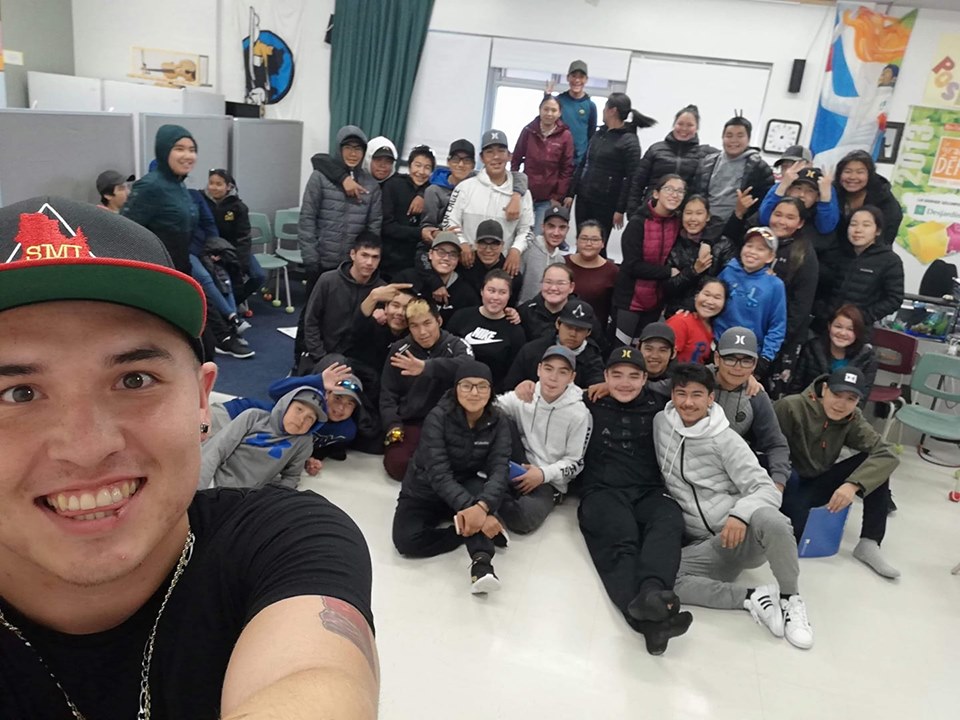 William Komaksiutiksak, also known as Northern Knowledge, lead workshops and performed as part of the Nunavik Wellness Tour in Kangisualluujjuak on Sept. 4. The tour will stop in every Nunavik community before October 25. (Courtesy Influencers Motivating Influencers)

The first stop of the Nunavik Wellness Tour was a busy one.

In Kangiqsualujjuaq the team of three who are travelling the region to discuss mental health and wellness were introduced to the community by a group of youth inviting them out for a walk on the land.

“It was good conversations and a good interaction with youth,” says David DeVos, a co-founder of the group Influencers Motivating Influencers, which organizes the tour.

And ultimately, that system perpetuates itself.

The group hopes to create those positive influencers within the communities they visit.

In Kangiqsualujjuaq, among many events, the group hosted a few workshops a day to discuss social problems and positive change, a paint night for women to express how they feel about themselves and how others treat them, and a movie screening of The Grizzlies, about a lacrosse team set up in Kugluktuk to help combat high suicide rates.

The production company behind The Grizzlies also put together a teaching guide for the film and some of the subject matter that comes up throughout it, which they supplied for the tour and to leave with the communities.

“So teachers can start to identify some of the things going on,” says DeVos. “And they’ll be prepared to hear some of the comments.” 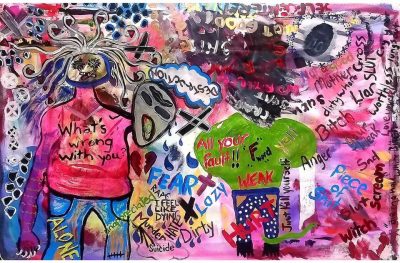 The itinerary for the wellness tour is broad and flexible, changing between communities. If there’s a chance to sit down in someone’s home to talk, to visit with elders or attend a community event, they’ll go.

“It doesn’t have to be in a workshop format or anything formal,” says DeVos. “Let’s go for a walk.”

The tour through Nunavik is being led by three people: Elberlyn Gerritsen Hill, a 20-year-old Mohawk artist and activist from Ottawa; William Komaksiutiksak, an Ottawa-based rapper also known as Northern Knowledge, originally from Rankin Inlet; and Brian Glow, a magician who uses his performances to discuss bullying and how to get through it.

Influencers Motivating Influencers has been travelling across the Canadian north for the past six years, with a dozen leaders or “influencers” involved, but this is the organization’s first-time in Nunavik.

“We thought we would see if there was any interest and, thanks to the Arctic Co-ops who put us in contact with the Fédération des Coopératives du Nouveau-Québec, they said, ‘We need something here,’” says DeVos.

“There is a population of 13,000 and this year alone, there have been 19 suicides. They said, ‘We need more attention, we need it brought to the forefront.’”

That’s the idea behind Influencers Motivating Influencers: to put mental health and wellness at the forefront and create positive change.

This tour is sponsored by the FCNQ, as well as the Kativik Regional Government, First Air and Air Inuit, but is largely volunteer run.

The organization started up seven years ago when DeVos was living in Saskatchewan and invited Alaskan actress Ariel Tweto to the community to talk about bullying.

“We sat outside one night, it was a nice night, and we talked about suicide and the impact it had had on us. She lost, I believe 10 out of 15 of her graduating class that committed suicide in Alaska,” says DeVos, who also suffers from depression and has lost relatives to suicide.

“All the lightbulbs went on and we just said we’ve got to do something.”

DeVos and his wife Cora Kavyaktok, originally from Cambridge Bay, founded Influencers Motivating Influencers and have been bringing new people on board ever since.

A letter from Coral Harbour wellness coordinator Molly Angootealuk following the 2018 tour that brought DeVos and Tweto to the community reads: “This had a huge impact on the students after they had been here. I myself started having phone calls from teenagers wanting help and that’s what we wanted to see and hear.”

Getting people to open up and talk about what they’re experiencing can be a big challenge.

The leaders of the tour aren’t formally trained, but rather have common grounds with the people they meet. From day one, DeVos says, they start to see that willingness to talk.