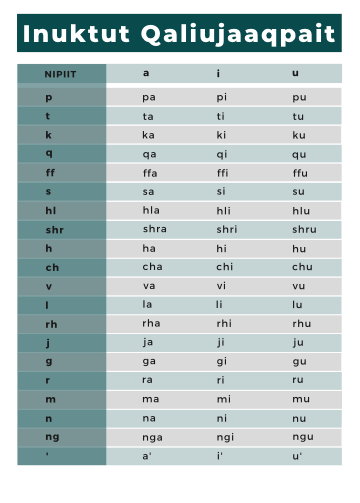 The board of directors that oversees Canada’s national Inuit organization has agreed to move ahead on a long-awaited unified Inuktut writing system.

Inuit Tapiriit Kanatami says that Inuktut Qaliujaaqpait is designed to write the Inuit language, in all its dialects, across all regions of of Inuit Nunangat.

ITK’s board, made up of representatives of its four member organizations, made the decision through a resolution passed unanimously on Sept. 10 at their annual general meeting in Rankin Inlet.

“It is a critical step in Inuit self-determination and taking ownership of our written language,” ITK President Natan Obed said in a news release.

ITK says the new writing system can be used to represent the sounds of any dialect spoken in any region.

“This is why it includes sounds from every dialect—including sounds that only occur in a few dialects—so that speakers of every dialect can write their own dialect using Inuktut Qaliujaaqpait according to the words and pronunciation they normally use,” an ITK background document says.

That was also the aim of the old dual orthography system—Qaniujaaqpait (syllabics) and Qaliujaaqpait (Roman orthography)—developed in 1976 by the now-defunct Inuit Cultural Institute, under the leadership of the late Jose Kusugak.

That attempt at a standardized writing system was adopted throughout most regions of what is now Nunavut.

But there are still nine different Inuktut writing systems used across all of Inuit Nunangat, some of which were introduced as early as the mid-1700s.

The new Inuktut Qaliujaaqpait, however, has been developed by Inuit, for Inuit, ITK says.

ITK describes it as an auxiliary system that can be used alongside existing regional orthographies.

“It is important to note that Inuktut Qaliujaaqpait does not replace syllabics—regions can and will continue use of syllabics and other distinct writing systems. There is no expectation that people who already use older writing systems will have to change the way they write,” ITK said.

The great benefit of Inuktut Qaliujaaqpait is that speakers of any dialect from any region can use it while following the pronunciation they use in their region.

“This makes it easier to read each other’s dialects and means Inuktut speakers are able to produce and share materials between regions. Over time, there will be greater consistency in Inuktut language education,” ITK says.

Another benefit is that the new system makes it easier to type and text on electronic devices with no need to create new keyboard layouts.

The Roman orthography also allows the use of sounds like as f, ch, rh, and so on that exist in some Inuit dialects, but don’t have standardized symbols in syllabics, ITK said.

And most younger Inuit in syllabics-using regions already know the Roman alphabet.

At the same time, Inuktut Qaliujaaqpait does not provide for any standard spelling or grammar rules.

“It is simply a standard set of characters standing for the sounds of Inuktut,” ITK says.

The new writing system represents eight years of work, including consultation with elders, teachers and other key users of Inuktut, starting with a recommendation made in 2011 within the National Inuit Education Strategy.

Those bodies worked for many years on the creation of the new writing system.

The next step is for ITK and regional organizations to put together an implementation committee.

“Implementation plans will be specific to each region’s needs and will look at how Inuktut Qaliujaaqpait will be taught and learned. In the short term, ITK and regional experts will present to interested groups upon request,” ITK said.