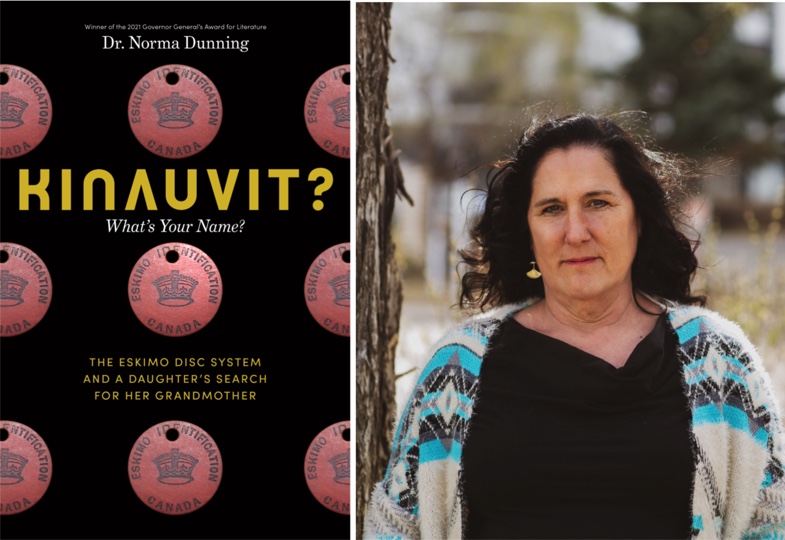 Inuk author and scholar Norma Dunning’s latest book “Kinauvit? What’s Your Name? The Eskimo Disc System and a Daughter’s Search for her Grandmother” looks at the mostly unknown history of the federal government’s disc system that was used in the early twentieth century to keep track of Inuit in the Arctic. (Photos courtesy of Douglas & McIntyre / Harbour Publishing)

When author Norma Dunning began the process of applying to be a beneficiary under the Nunavut Land Claims Agreement about twenty years ago, she was asked a curious question in her application:

What was her disc number?

It was a question that prompted Dunning, a writer and academic in Edmonton, to explore the history of a government identification system for Inuit and her own identity as an Inuk.

The identification disc system began in 1941 as a way for the federal government to keep track of Inuit in the North, Dunning explained.

The idea was every Inuk would be assigned an official documentation number on a small disc, which they would wear around their neck or sew into their clothing.

Part history book and part memoir, Kinauvit? What’s Your Name? The Eskimo Disc System and a Daughter’s Search for her Grandmother compiles years of Dunning’s research into the then-called “Eskimo Identification Tag System,” interviews she did with elders and her own personal story growing up with a complicated sense of cultural identity.

“Nobody’s ever really sat down and put together the history,” she said in an interview. “I hope people walk away informed.”

Despite being in place for three decades — from 1941 until the early 1970s —  there was little information about it when Dunning began her research, she said.

Dunning searched through library archives to find what she could about how and why the system was implemented.

“It’s a really convoluted system to try to find information on — there’s little bits and pieces here or there,” she said.

Essentially, it was a dehumanizing method for the government to control Inuit, Dunning said.

“I’ve had people say to me, ‘well, we all have numbers, like driver license numbers’, but we don’t have to memorize them or tell the clerk at Safeway, when I’m buying my groceries, my number.”

At the same time that the system was designed to keep tabs on Inuit, it also showed a lack of cultural awareness by its creators.

Dunning found evidence that, at one point during the discussion about what the disc should look like, government officials were considering engraving the image of a bison, an animal that doesn’t even live in the Arctic and isn’t a part of Inuit culture.

“It is ridiculous and it shows ignorance of the people at that time who were in the North and were the ones administering the system,” Dunning said.

Information about the tag system that Dunning couldn’t find in archival materials, she found instead  through hours of interviews with Inuit community members who experienced the tag system firsthand, or who had relatives who had been given a number.

In turn, those conversations helped Dunning reflect on her own Inuit identity and upbringing.

The book actually began as Dunning’s master’s thesis, a straightfoward academic text with none of the personal elements that are now woven into the book. Then Dunning’s editor encouraged her to include herself in the story.

It opens with a scene from Dunning’s own childhood growing up in Quebec, when she asks her mother in the kitchen what their family is. Her mother tells her that they are French, a story that Dunning repeats throughout her life, but knowing deep down that there is more to her family’s story than her mother will let her know.

“I think that we spend our entire lives trying to sort out what our identity is,” Dunning said.

It wasn’t until Dunning was an adult that she began to connect the dots of her family’s Inuit history, taking the first steps to enroll herself and her sons as beneficiaries and opening up the door for them to proudly identify as Inuit too.

“I don’t think that my story is so unusual. I think that there’s many Indigenous children who are not told exactly what they are. I think it’s how the world has become and how especially Indigenous mothers protect their children.”

Dunning hopes more awareness of the disc identification system will lead to more accountability from governments.

Kinauvit? What’s Your Name? The Eskimo Disc System and a Daughter’s Search for her Grandmother is available now in bookstores and online through Douglas & McIntyre Press.