Funded with $30 million from the federal government and $11 million from the Government of Nunavut, the harbour “plays a key role in providing food, supplies and tourism opportunities for the Northern Qikiqtani region,” federal minister Dominic LeBlanc said in a news release on the July 25 opening. 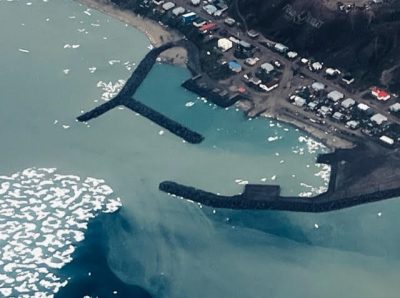 An aerial view of the new community harbour in Pond Inlet. (Photo courtesy of Dennis Patterson)

“This transformational asset will provide economic benefits and improve the overall safety of marine activities in the region.”

In a background document, the GN said the new harbour was needed because Pond Inlet’s shoreline offered no natural shelter for boat launching and docking facilities.

The construction contract was awarded in spring 2018, to allow the harbour to accommodate 130 vessels, plus moorage space for deeper-draft fishing vessels.

Nunavut Sen. Dennis Patterson, who attended the opening, said the new harbour will help improve safety within the community. 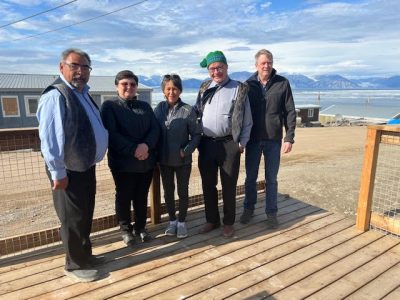 “It’s not only going to be of assistance to hunters and fishers who are very active in Pond Inlet … it’s going to save lives and provide a safe haven that hasn’t been there [for community members] before,” he said.

He said the opening of the harbour also strengthens the hamlet’s local economy.

“I think the future for Pond Inlet and other Nunavut communities is to diversify its economy beyond government and service sector jobs,” he told Nunatsiaq News.

He said the new harbour will help Pond Inlet grow its tourism and fishing industries.

“Pond Inlet has been a major beneficiary of employment in the mining sector, but its potential for tourism and the fishery has yet to be tapped,” he said.

“I see the small craft harbour as the key support to developing our renewable resource economy, including the fishery and tourism.”