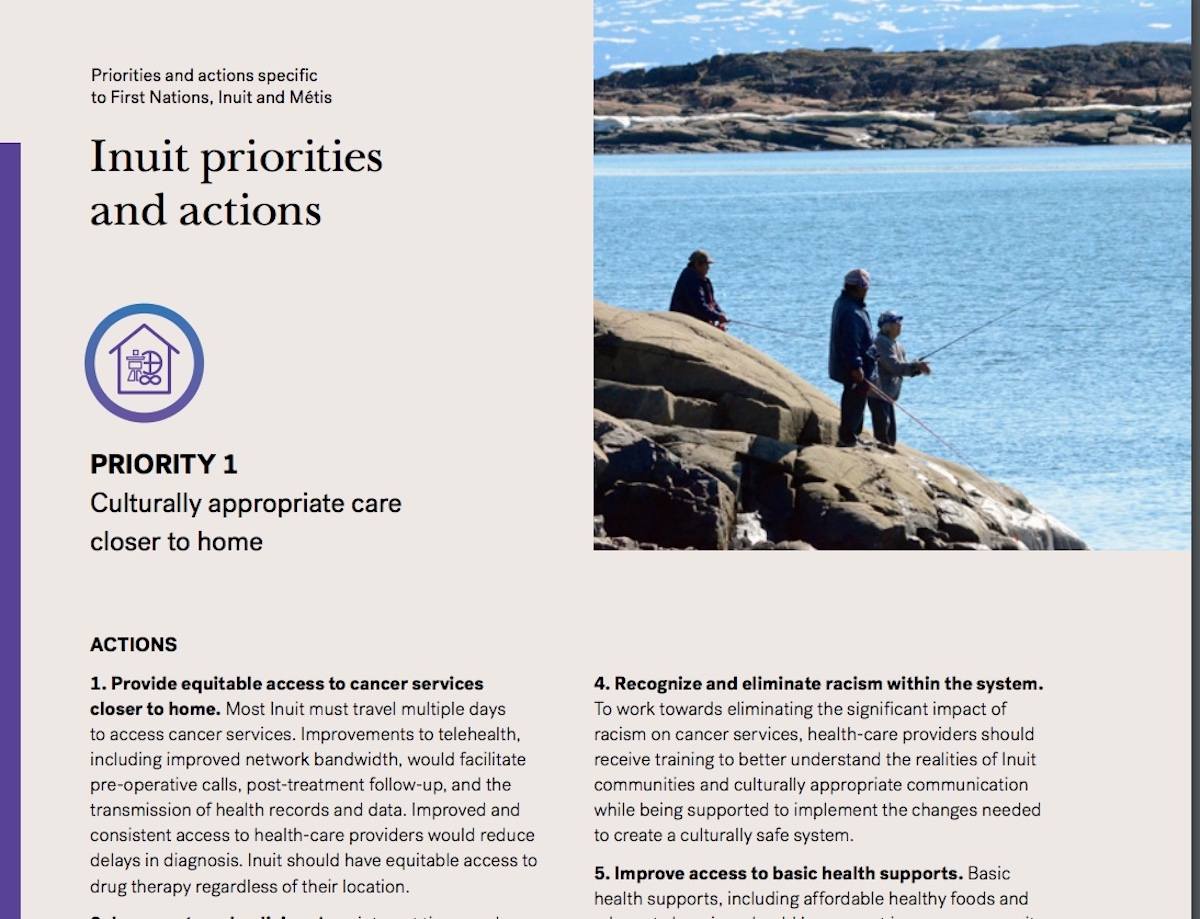 The Canadian Partnership Against Cancer has released a new strategy that outlines priorities in cancer care for the provinces and territories.

A new national cancer control strategy aims to improve overall cancer prevention and care among Inuit over the next 10 years.

Last week, the Canadian Partnership Against Cancer launched the 2019 Canadian Strategy for Cancer Control, outlining priorities in cancer care for the provinces and territories.

The federally funded agency says its report is one of the first disease strategies in Canada’s history to also include priorities and actions specific to Indigenous peoples, including Inuit.

Several Inuit communities, leaders and organizations participated in developing the strategy, notes a news release on the strategy.

Its top priority for Inuit is for there to be improved access to basic health supports.

“Affordable healthy foods and adequate housing should be present in every community and available to all Inuit,” says the report.

Food and housing also have an impact on care, as the strategy points out, because “doctors often make recommendations on dietary changes after a diagnosis without taking into account food scarcity,” among other living conditions.

The priorities cited for Inuit also call for care closer to home because most Inuit must travel “multiple days” to access cancer services.

Inuit should also have equitable access to drug therapy regardless of their location, the strategy said.

Other improvements cited in the strategy include consistent access to health-care providers to reduce delays in diagnosis, as well as telehealth to improve pre-operative calls and post-treatment followup, and the transmission of health records and data.

The strategy also calls for an approach that recognizes the impact of trauma on illness, and is responsive to “regionally specific Inuit culture, and recognize[s] the importance of language and country foods to health and healing.”

To that end, it recommends the design and delivery of Inuit-driven programs and services and Inuit-governed research and data systems. These could collect and report on Inuit-specific data and determine the impact of environmental contamination on Inuit health, specifically cancer risk, the strategy said.

Compared to the general Canadian population, Inuit have a higher incidence of lung, liver, throat, nasal and salivary gland cancer.

In 2013 the Canadian Cancer Society reported that in Nunavut, while incidence rates for some cancers are still lower, the territory’s cancer death rates are the highest in the country.

And the incidence of lung cancer among Canada’s Inuit is higher than in most other populations in the world.

Starting this autumn, the Canadian Partnership Against Cancer says it will meet with provincial and territorial governments, Indigenous partners, patient groups and cancer organizations to discuss the strategy’s priorities and implementation plans.