How the North was won

From Labrador to Yukon, five ridings up for grabs 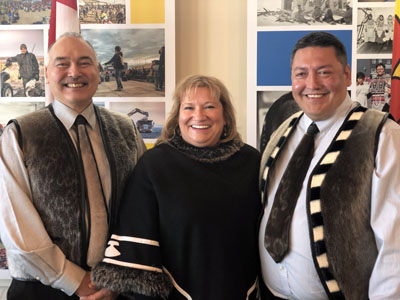 Yvonne Jones, centre, has been re-elected in Labrador. (Photo courtesy of KIA)

The North will send a variety of representatives to the 44th Parliament, but none of them are poised to be Conservative.

Five ridings from Yukon to Labrador appeared to elect three Liberal candidates, a New Democrat and a Bloc Quebecois member. Not only did a Conservative not win in northern Canada, but the party only placed second in one race — in Labrador — as of early Tuesday morning, with official results not yet in.

Monday’s results are essentially a repeat of the federal parties’ standings from the 2019 election.

For the Conservatives, this means the party has not won a seat in the North since 2011.

Two Liberal seats will come from the west. In the Yukon, final results have yet to be declared but Brendan Hanley, the former chief medical officer for the territory, was leading the NDP’s Lisa Vollans-Leduc. Longtime Yukon Liberal MP Larry Bagnall did not run again in Monday’s election.

When the 44th Parliament assembles in Ottawa, the issues the northern candidates championed will be clear as well: housing, climate change, health care and reconciliation. These issues are popular talking points throughout the country, and they carry particular prominence in the North.