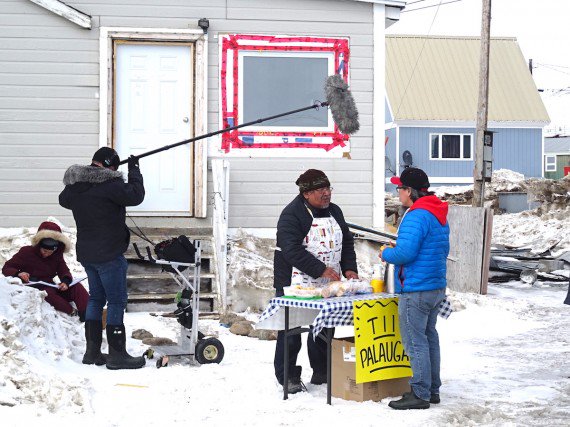 Inuit Broadcasting Corporation’s show Qanurli is seen being filmed in Iqaluit in 2018. Nunavut Tunngavik Inc. is helping to fund plans to launch an educational Inuktut channel that would broadcast shows by IBC, as well as produce its own programming. (File photo)

This commitment—recently announced on July 9, Nunavut Day—will support the long-standing efforts of Nunavut broadcasters to create such a channel, which was previously billed as TV Nunavut, and is now being called Inuit TV.

The aim is to create and broadcast Inuit-created educational television programming in Inuktut dialects across the circumpolar North.

“We’ve been looking forward to this for a little while now,” said Joey Evalik, the vice-president of Inuit TV. “I’ve been with Inuit TV for about 12 years now, as a volunteer board member.”

“It was a lot of relief to make the announcement,” he said. “Lots and lots of weight lifted off our shoulders.”

Inuit TV is going through the process of applying to the Canadian Radio-television and Telecommunications Commission to become an educational broadcasting society. They’ve also been working with the Government of Nunavut to keep them up to speed with their plans.

Evalik lives in Cambridge Bay, and he said Inuit TV has a board member in each region.

Inuit TV will initially be “starving for programming,” Evalik said, so they’ll partner with IsumaTV and the Inuit Broadcasting Corporation, to air their content.

The idea is Inuit TV will eventually create its own programming by partnering with Inuit, anywhere in the Inuit circumpolar north, Evalik said, to tell stories about the land, culture and language.

“Anything my seven-year-old kid can pick up on,” he said.

Evalik said his son watches TV during the day when he’s at work, and often ends up watching the Disney channel and Treehouse. Evalik wants him to instead be watching TV in Inuktut, so when he gets home from work he can continue the lessons in the evening.

The “ultimate dream” is to have their own channel, Evalik said. That would require a lot of infrastructure to be in place in Nunavut.

“If we could find funding to do that, it would not only employ our Inuit population with the construction and the building … we could also employ and train them in the media industry.”

In the meantime, Inuit TV is in talks with the GN to share the channel that it uses to broadcast sittings of the legislative assembly. So when the government isn’t in session, Inuit TV could broadcast.

Evalik said they’re in the early phase of their development plan, and can’t really say when Inuit TV will start broadcasting. “That’s something we as a board have to work on and decide upon.”

Having Inuit produce programming for TV in Inuktut will ensure the content comes from an Inuit worldview, and Inuit will recognize themselves in it, said Aluki Kotierk, the president of NTI.

The project also falls in line with one of NTI’s priorities—to protect, promote and revitalize Inuktut.

“Young Inuit will start to grow up thinking, ‘Well I want to be a filmmaker, or I want to be a writer using my own language,’ and not feel like they have to be especially proficient in English to take part in those,” she said.

Evalik said he’s noticed in the last decade that there has been less Inuit language and culture available to watch on TV.

“Trying to get that Inuktut language into our homes is vitally important for our children to learn our language,” he said.

Kotierk loves cooking. “I am very interested in seeing any kind of cooking shows in Inuktitut. I think that would be very exciting.”