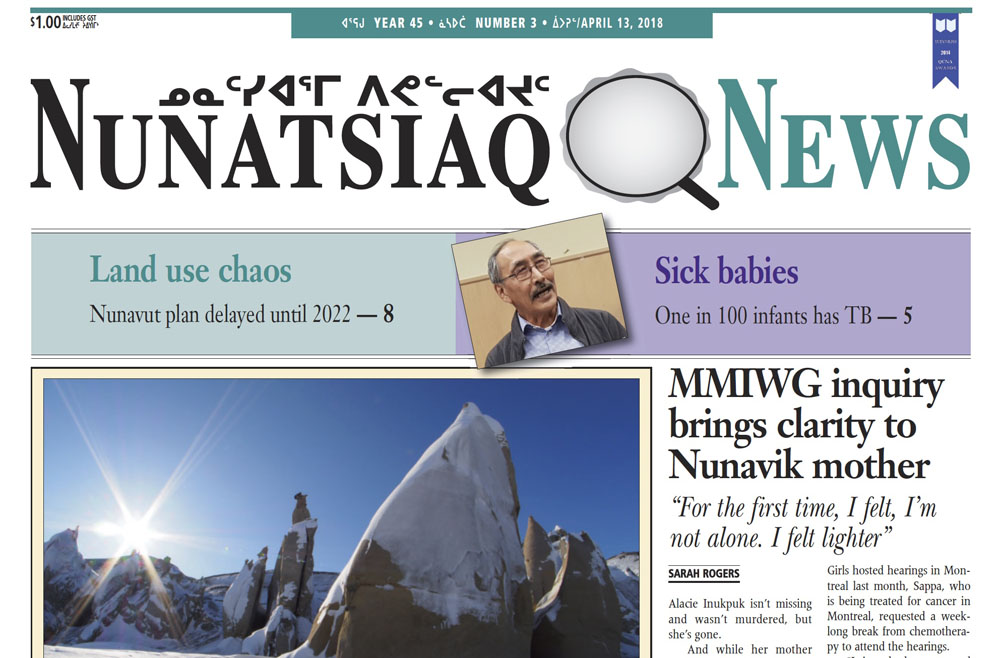 This poignant story by Sarah Rogers, published on the front page of our April 13, 2018, print issue, won third place in the best news story category at the Canadian Community Newspaper Awards competition this year.

Entered in the 4,000 to 12,499 print-circulation category, the Nunatsiaq News website finished first, ahead of the Parry Sound Beacon Star (second) and the North Grenville Times (third).

A story by Jim Bell on the civil court judgment rendered last year against Baffin business owner Ike Haulli, “Nunavut sexual predator must pay $1.22 million to his victims,” published in print on April 27, 2018 and online on April 19, 2018, finished first in the best news story category.

And a moving story by Sarah Rogers on the 2017 death of an 11-year-old girl in the Nunavik community of Umiujaq, “MMIWG inquiry brings clarity to Nunavik mother,” published in print on April 13, 2018 and online on April 4, 2018, won third place honours in the same category.

Also, an editorial by Jim Bell on the Nutrition North Canada program, “It’s about nutrition, stupid,” published in print on Nov. 2, 2018 and online on Oct. 25, 2018, won first place for best local editorial in the same circulation category.

Two other northern newspapers did well in the 2019 CCNAs, which recognize work published in 2018.

The Yukon News of Whitehorse, now published by Black Press Group Ltd., won 12 awards in a wide variety of categories.

The CCNA competition is held for weekly and small-market newspapers across the country that were formerly eligible to be members of the Canadian Community Newspaper Association.

Nunatsiaq News is a member also of the Quebec Community Newspaper Association, whose membership comprises newspapers that serve English-language readers in Quebec.

In this year’s QCNA competition, Nunatsiaq News has been nominated for 15 awards.

The winners in that competition will be announced on June 8, at a gala to be held at the Hotel du Lac Carling in Grenville-sur-la-Rouge, Que.