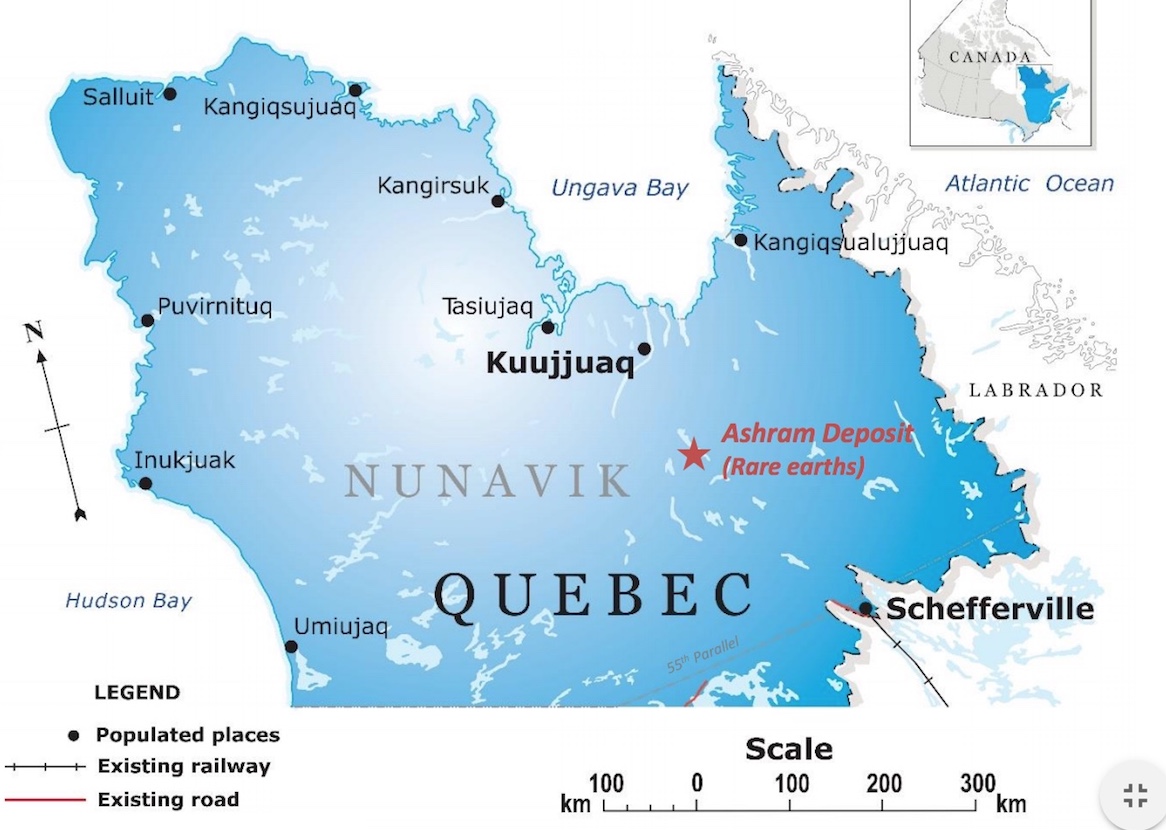 Organizations representing Inuit in Nunavik and in the comunity of Kuujjuaq have signed a letter of intent with a junior mining company that wants to build a 185-kilometre haul road south from Kuujjuaq to an open pit rare earths mine.

Maggie Emudluk, Makivik Corp.’s vice-president for economic development, and Sammy Koneak, the president of the Nayumivik Landholding Corp., signed the letter of intent on May 15 with Vancouver-based Commerce Resources Corp.

A Makivik Corp, spokesperson said the letter of intent creates a committee that will provide answers to concerns and questions from people in Kuujjuaq.

“The Ashram deposit project is still in a pre-development phase and has to go through several stages prior to getting formal Inuit acceptance to be implemented,” the Makivik spokesperson said.

The company wants to develop its Ashram deposit, located roughly 130 kilometres south of Kuujjuaq, into Canada’s first mine for rare earth elements, which are in growing demand for use in digital devices like cell phones tablets, flat screen TVs, and hybrid vehicles. 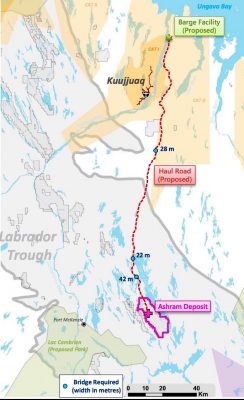 Here you can see the route of a proposed 185-km haul road from the Ashram deposit to the barge facility on the Koksoak River that leads into Ungave Bay. (Image courtesy of Commerce Resources)

In a news release on the signing, Commerce Resources’ President Chris Groves called the agreement “a milestone that speaks to the cooperation between all parties” on moving ahead with the project, whose capital cost is estimated at around $765 million.

Groves said this week’s agreement recognizes “the primacy of the James Bay agreement, the practicalities of advancing our Ashram deposit through the next few years of development, the practicalities of getting our material to world markets, and the best way to achieve our collective goals of a new producing mine in Nunavik through the cooperation of the Inuit and Commerce towards our mutual benefit.

“We look forward to this future with the Inuit in Nunavik.”

The deal follows a public meeting held a few weeks ago in Kuujjuaq on the road, which would end near Lac Le Moyne at the rare earths deposit, which already has an operating camp and ongoing exploration activities.

The proposed mine, with its 25-year lifespan, would likely be a game-changer for Kuujjuaq, which has a population of about 2,800 and no industrial development.

Details of the project, such as when it could be built and how many people it would employ, will likely be answered when Commerce Resources releases the mine’s pre-feasibility study, now in its final stages.

The company wants to put an open pit mine along with a processing plant, tailings management facility and an airstrip.

The haul road and an accompanying barge facility on Ungava Bay is expected to cost $155 million. 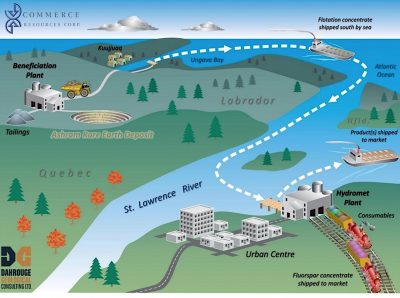 Both the road and barge facility would serve as “multi-user” infrastructure, the company has said.

The road would be 23 metres (75 feet) wide. Its traffic would include B-train trucks, consisting of two trailers linked together by a fifth wheel, up to 27.5 m (92 ft) long, moving at 60 kilometres an hour down the road, which would cross over three bridges.

The road would be just slightly longer than the 150-kilometre road from the Raglan nickel mine complex to Deception Bay on Hudson Strait.

In a presentation at the recent regional mining workshop in Kuujjuaq, Commerce Resources said “no significant environmental concerns” were identified along the road’s path.

The barge facility, which will be located on the eastern shore of the Koksoak River, will be accessible to people in Kuujjuaq via ferries. About five vessels per year are planned to haul out rare earths.

Commerce Resources said the mine could have an annual production 16,850 tonnes. Global demand for rare earth elements was estimated at roughly 136,000 tonnes in 2017.

The market for rare earths is also expected to grow as more people turn to hybrid vehicles, which typically contain more than 27 kilograms of rare earths.

China now produces most of the world’s rare earths, but in recent years the Chinese government has imposed tariffs and export restrictions on rare earth buyers.

So mining companies have been scouting for new sources of rare earths in Australia, the United States, Brazil, South Africa and Greenland, where a large deposit of rare earth minerals is under development at Kvanefjeld near Narsaq.

Mining fits neatly into Quebec’s Plan Nord, which, when launched in 2011, focused largely on mining development.

The Ashram project has received some support from the Quebec government: $365,000, with Université Laval, to study the process for the extraction of rare earth elements and develop a software model simulator for the separation of these elements.

Commerce Resources also has a deal for the assessment of wind power potential with Tuglik Energy Corp. a Montreal-based renewable energy company.

However, the route to opening a mine in Quebec is not as transparent as in Nunavut, nor is the participation of Inuit in the regulatory process as strong.

In Nunavut, Inuit are involved at every step of the way through regulatory agencies like the Nunavut Impact Review Board and the Nunavut Water Board, and relevant information on projects is posted on the NIRB website for everyone to see.

But, in speaking about the May 15 letter of intent with Commerce Resources, Emudluk said “Inuit will be directly involved upstream in any discussions and proposed planning of this project. They will also be enabled to provide insights and share concerns during the progression of the project.”

She said the agreement is “in accordance with the Nunavik Inuit Mining Policy objectives that look forward to establishing clear lines of communication with the industry.”

That 2014 policy calls for sustainable mining in Nunavik provided that “Nunavik Inuit derive significant direct and indirect social and economic benefits during the exploration, development, operating and restoration phases of mining activity in Nunavik and that this activity is carried out in conformity with all existing applicable federal and provincial laws respecting environmental and social protection in Nunavik or, as the case may be, in conformity with the James Bay and Northern Québec Agreement.”

The release of the pre-feasibility study is the next major project step in the Ashram rare earths mine’s development, which will then be followed up with an environmental and social assessment.

The headline on an earlier version of this article said Nunavik Inuit “said yes” to the Ashram project. This was not accurate. While the Nunavik organizations have agreed to work with the company on consulting the people of Kuujjuaq, the project has still not received formal Inuit acceptance, Makivik Corp. said as a clarification.