“It won’t be fibre, but it will be livable” 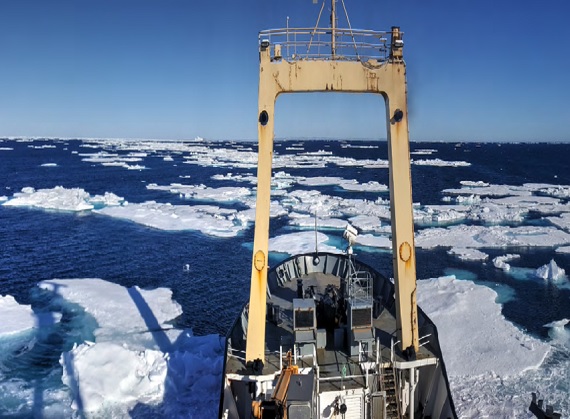 In 2018, IT Telecom International’s survey vessel the Polar Prince navigated late sea ice in the Hudson Strait to map the sea bed along Nunavik’s coast for a future fibre optic link to the south. Results from the latest round of bids for installing that fibre link should be shared with Kativik Regional Government councillors in February 2020. (Photo courtesy of IT Telecom International)

Tamaani, a subsidiary of the Kativik Regional Government that provides internet services across Nunavik, is experimenting with caching devices to ease online congestion caused by the rising popularity of video-streaming services like Netflix and YouTube.

Éloi Clément, assistant director of Tamaani, told the KRG’s last meeting of 2019, on Nov. 27, that such a device would act as a server, storing information locally to reduce the bandwidth used and speeding up access to that information.

“We tried one and we are trying another next year to make the experience quite a bit better from what it is today,” said Clément. He said the first system they tried didn’t meet the level of caching they were hoping for.

“By next year, it should be at least livable,” Clément said. “It won’t be fibre, but it will be livable.”

As well as the different caching systems they’re trying out, Clément said they’ve approached Netflix directly about a similar system the company itself provides.

“Netflix said we would be too small to be considered for that free program they have,” Clément said. “We’re still going to push to try to do that. Unfortunately, they’ve said no so far.”

Easing the burden of streaming

But big improvements to the region’s internet access will depend on the completion of ongoing plans to lay underwater fibre optic cable along the coast, to provide a high-speed replacement for the region’s existing satellite-based connections.

“We’re trying really hard to make your internet experience as best as it can be, but until we get fibre to the south or increase satellite capacity, we are very limited in what we can do,” said Daryl Combden, the regional government’s director of administration, on Nov. 27 at the KRG’s last meeting of 2019.

“Satellite, it’s very limited in capacity and very expensive to get more. We’re working very hard on trying to squeeze as much as we can out of it.”

The rise in streaming, online gaming and the use of certain apps is putting a particularly weighty burden on Nunavik’s already-stretched satellite system.

“We’re seeing lots and lots of heavy usage. Facebook, Netflix, YouTube, all of these applications are very heavy on bandwidth,” said Combden.

“We see a lot of users of these applications in one household, on one modem. Five users on different applications at the same time.”

Combden said streaming is hampering service so much that they’ve restricted the use of high-definition and 4K streaming, which lowered the clarity of the picture but means more people can watch.

The push to get Nunavik off satellite internet altogether continues after a few bumps.

The regional government’s request for proposals to lay a fibre optic line along the sea floor of the Hudson Bay coast was extended into late November.

The tender opened in September, after a June request for proposals saw only a single bid. That bid was rejected due to a lack of testing of how the company’s technology would hold up in saltwater.

An update on responses to the latest tender will be shared in the upcoming February meeting of the regional government council.

“The reason we did the extension was to ensure we get some competitive bids,” Combden said.

The hubs for those networks are the recently completed communications shelters in communities. They’ll also be the access point for the underwater fibre line from the south.

“To get the true benefit of both components, you have to wait for the submarine fibre to be laid,” Combden said.

But he said the in-home fibre would still improve some of the slowdowns during peak use hours.

“We’re planning on implementing the on-land house-to-house portion prior to getting the submarine fibre,” Combden said. “Fibre to the home may alleviate some of that local distribution, but until we get that submarine fibre, we’re still on satellite.”

While the Hudson Bay fibre line will connect the western communities of Nunavik in the shorter term, the Ungava Coast will likely wait another six to eight years, he said.

However, removing the Hudson Coast from satellite will free up capacity on the satellite-based system, improving service in the remaining communities.

With limited funding for a fibre project, Combden said they were able to get most communities off satellite earlier by prioritizing the Hudson Coast.

“It’s much more cost-effective. There’s very little tide, sandy shore, the cost was much lower for the Hudson,” he said. “But all 14 communities are very important us.”

Within the next decade, a fibre connection should be available in all communities, Clément said.

“With what we’ve heard on funding available over the next 10 years, it should be quite a bit before that ideally,” Clément said. “We are hiring, we’ll grow our team quite a bit this year so it should be easier to function and to get all these projects out.”