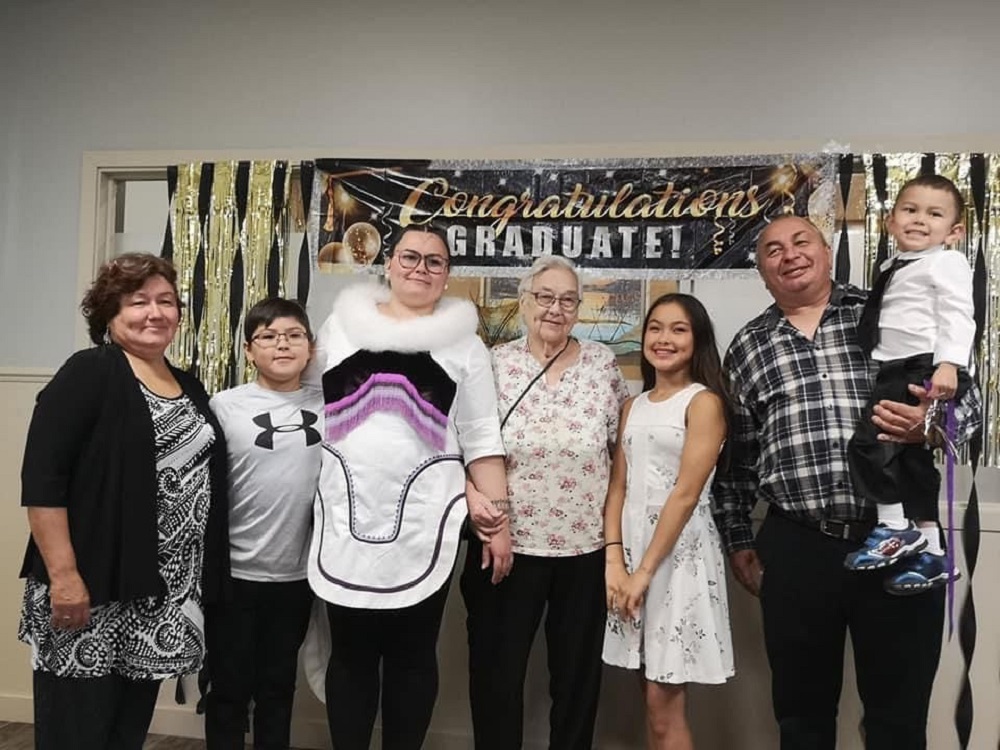 Marilyn Mesher, third from left, celebrates her graduation from Nunavik’s midwifery program in Kuujjuaq Sept. 3. She is the first Inuk registered midwife to practise in the Ungava region. (Photo courtesy of the Mesher family)

Marilyn Mesher has been a staple in Tulattavik health centre’s birthing centre for many years.

Over the last seven years, the Kuujjuaq-based midwife has attended more than 120 births of Nunavik children. The mother of three took two years off to birth and raise her youngest child.

Today, Mesher has a new designation—she is now the newest graduate of Nunavik’s midwifery education program and the first registered midwife for Nunavik’s Ungava region.

Mesher did her exams earlier this year, and finally completed her registration with Quebec’s Order of Midwives (l’Ordre des sage-femmes du Québec) in July.

“It’s not much of a difference from the last seven years, but it’s good to get it done,” Mesher said.

“A lot of people are happy and proud to see an Inuk midwife. When a woman feels comfortable speaking in her own language, you feel like you’ve accomplished something.”

Unlike Nunavik’s Hudson coast, where a midwifery program has been established since 1987, Kuujjuaq only saw its first midwives begin practising in 2009.

Mesher was the training program’s first student. Tulattavik health centre now employs Mesher along with a team of two to three southern midwives that rotate in and out, plus a student. The centre plans to post another student position in the coming weeks, ideally for another Nunavik Inuk to fill.

The fact that Nunavik’s midwifery program is much more established on the Hudson coast was never a deterrent to Mesher; she said she was inspired and motivated seeing another generation of Inuit midwives forge a path.

“There might have been more on the Hudson coast, but we’re starting to get that recognition on this side now too,” she said.

“With a good team supporting you, you can get through. We do it for the women and the families.”

In Kuujjuaq, there had been plans to celebrate Mesher’s graduation with a community feast. But gatherings in the region are still limited to no more than 25 people, so her colleagues and family members hosted a smaller lunch for her at the Kuujjuaq Inn instead.

“She is an amazing midwife—she was even before she graduated,” said one of Mesher’s fellow midwives, Ann Montgomery.

“The community is super proud to have someone who is so skilled and professional.”

Before 2009, Nunavimmiut women who live in Ungava communities routinely flew to Montreal to give birth. The opportunity to birth in Nunavik with an Inuk midwife has had a positive impact on so many families, Montgomery said.

Tulattavik’s goal is to eventually have an entirely Inuit team of midwives.

“I think I see that sense of cultural safety,” Montgomery said. “When babies are born in the community, it’s just so amazing for the family, that feeling.

“Little kids coming right in after their new sibling is born, and dads being able to bond with their babies right away,” she said. “It’s just so good for the community.”