Marilyn Mesher has caught 30 newborns in her first year 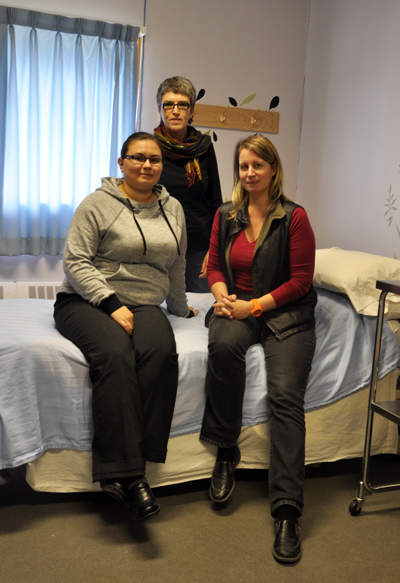 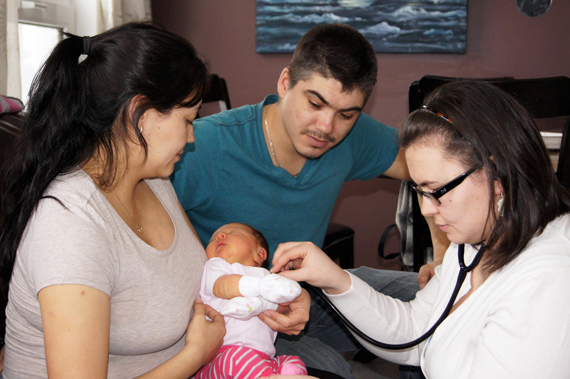 “What do you want to be when you grow up?” the friend asked.

“I want to work at the hospital, like my mom,” answered the little girl.

“She’s one of my biggest motivators,” said Mesher, who has just completed her first year of midwifery training at the Tulattavik health centre in Kuujjuaq.

Mesher is the training program’s first student, and if successful, she’ll go on to become the Ungava region’s first Inuk midwife.

Unlike Nunavik’s Hudson coast, where a midwifery program has been established since 1987, Kuujjuaq only saw its first midwives begin practicing in 2009.

The program has grown slowly but steadily and now counts four practicing midwives, plus Mesher.

Ungava women with low-risk pregnancies no longer go south to birth. That means 57 per cent of women along the Ungava coast had their babies with midwives in Kuujjuaq last year — equal to 90 births.

But like many of the professional health care positions in Nunavik, Kuujjuaq’s team of midwives relocated from the South.

Five years ago, Mesher was five courses away from completing a nursing program at John Abbott College outside of Montreal when she gave birth to her own daughter.

Mesher decided to return to Kuujjuaq at that point, but never let go of the idea of some day working in health care.

When a midwife finally went on the radio last summer looking for Inuit trainees, Mesher said, “OK, this is a good opportunity.”

Mesher takes weekly classes from the centre’s midwives and shadows them on consultations but as she learns the ropes, Mesher’s been fairly autonomous in her day-to-day work.

Since she started the program in September 2013, Mesher has caught 30 newborns from the birthing room at Tulattavik. She’s also started doing stitches and offering post-partum follow up to new mothers.

At the rate she’s going, Mesher could graduate as a fully certified midwife in another three years.

And Inuit women have told Mesher how grateful they are to have her with them during such a life-changing event.

“For some Inuit, it’s hard to leave their children and deliver in Montreal, where there’s no support,” Mesher said. “Even if you’re coming from other villages [to Kuujjuaq] there’s always family around.”

But language has proven to be Mesher’s biggest strength. With her, Inuit women are able to birth in their mother tongue.

“They’re comfortable expressing themselves [in Inuktitut] with me, and that feels good,” she said. “I would love to see more Inuit midwives.”

So far, only one other local student enrolled, but later left the program. A cousin of Mesher’s has also showed interest, after sitting in on a recent birth.

Midwives hope that as the training program grows, it will translate into a new space exclusively for midwives, birthing mothers and their families.

In its current set up, Kuujjuaq’s midwives work out of a birthing room on the main floor of the Tulattavik health centre.

“Here, when you yell, the whole department hears you,” said Kuujjuaq midwife Marie-Josée Gagnon, who helped to launch the training program in 2013. “It’s not comfortable for the women, but also for others in the hospital.”

Gagnon said the birthing room lacks some basic things such as a bathtub and a bed large enough for mom, partner and a newborn to fit in.

As Tulattavik’s patient transit centre was being renovated and expanded in 2011, part of its former facility was meant to be converted into a new birthing centre, equipped with more private rooms.

But that space was eventually dedicated to another department at Tulattavik.

The new facility would ideally be independent of the health centre, although it would have to be linked to the hospital to allow for patient transfer in case of emergency.