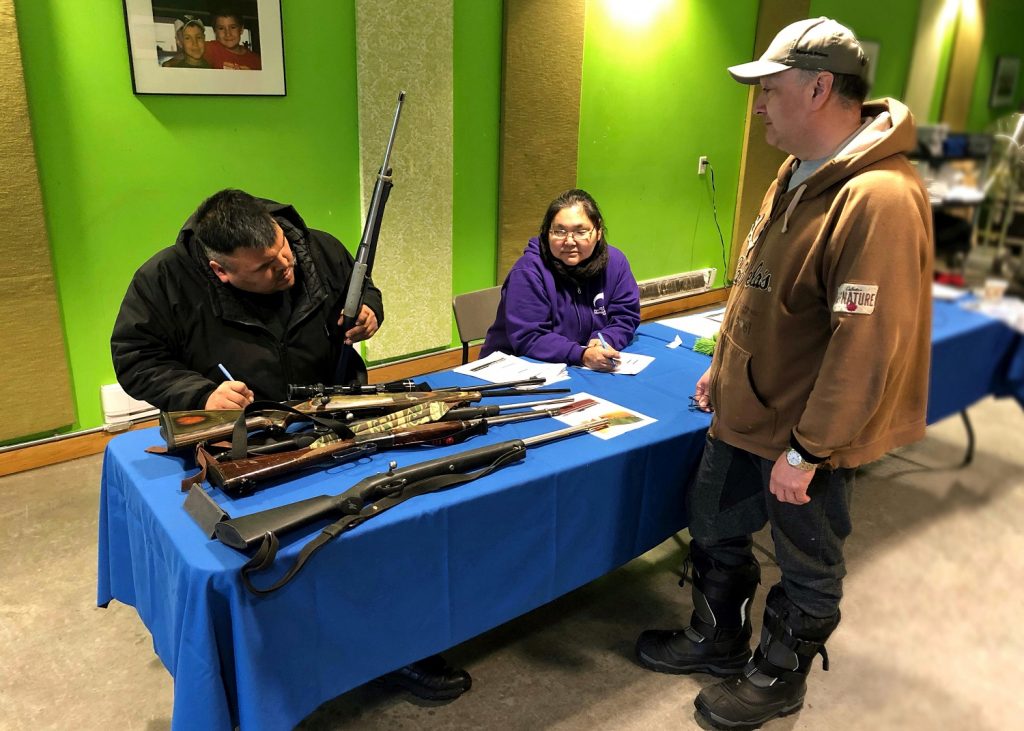 Kuujjuaq gun owners bring their rifles to the Kattitavik town hall in early 2019 to have them registered at a community clinic. Makivik Corp. is still working to have Nunavik Inuit exempt from Quebec’s gun registry, and now a new federal ban. (Photo by Isabelle Dubois)

A year and a half after it came into force, Nunavik Inuit are repeating calls to the Quebec government to exempt the region’s hunters from its gun registry.

The registry was introduced in Quebec in 2018 but came with a one-year grace period. Since Jan. 29, 2019, all gun owners in the province have been required to register their legal weapons.

Since the legislation was first tabled in 2016, Makivik Corp. has asked for Nunavik Inuit to be exempt from the registry, citing traditional harvesting practices in the region.

Makivik had initially pitched the creation of an Inuit working group to help propose adjustments to the legislation, requesting the province suspend the registry in Nunavik in the meantime.

The organization said it received “a promising verbal reply” from Quebec, but never succeeded in negotiating any kind of exemption for Inuit.

Meanwhile, the registry continues to interfere with Inuit’s ability to harvest, Makivik’s board of directors said at its annual general meeting held in Kuujjuaq July 14-16.

In a resolution moved by Makivik’s treasurer, George Berthe, its board of directors voted to “reiterate their request that the Inuit beneficiaries of the JBNQA be fully exempted from the Firearms Registration Act,” and to “support Makivik in its effort with governments with regards to the use of firearms for subsistence purposes and for the exercise of their right to harvest.”

Makivik hasn’t yet said if it has sent the resolution to the Quebec government.

The Inuit birthright organization is also keeping its eye on a new federal firearms ban.

The same resolution includes Makivik’s efforts to ensure that a new ban on assault-style rifles doesn’t impact harvesters in the region.

In May 2020, Ottawa announced a new ban on some 1,500 models of military-grade weapons.

In response to that, Makivik is working to analyze the list of weapons that are subject to the new restrictions to ensure that none are firearms used by Nunavik hunters for the purposes of subsistence harvests.

Prime Minister Justin Trudeau has said there will be a two-year grace period for firearm owners to comply with the new ban.