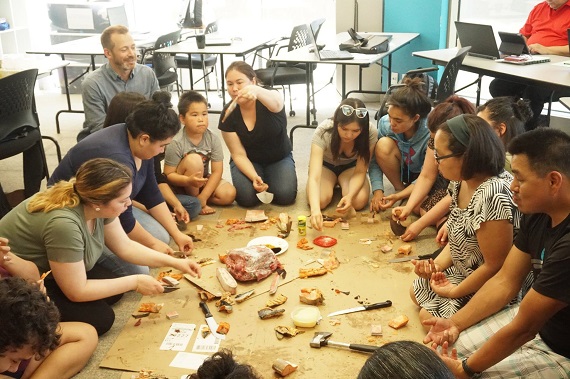 Nunavik Sivunitsavut’s 2018-19 class shares a meal together at a retreat held in the Laurentians north of Montreal. Kativik Ilisarniliriniq is hoping to launch a new French-language version of the program. (Photo courtesy of KI)

The Nunavik school board first secured the funds to open Nunavik Sivunitsavut in 2017, a program modeled after the successful Ottawa-based Nunavut Sivuniksavut.

The program teaches students in both English and Inuktitut, and is now in its fourth year.

“Of the 20 people who responded, 16 of them are currently studying in French and said they would attend a program if it were available,” she told commissioners, who are meeting this week in Kuujjuaq.

“So we’re hoping to offer the French-language version of the program in the fall of 2022.”

The board hasn’t yet indicated if and from where it’s secured money for a new Nunavik Sivunitsavut. For now, it plans to hire a program developer in the new year.

Nunavik Sivunitsavut currently runs out of a space in Avataq Cultural Institute’s office in downtown Montreal. But with Avataq’s lease up for renewal in 2022, the organization has opted to move into some buildings owned by the Montreal Museum of Fine Arts.

If all goes well, the school board hopes to move the programs into the venue by 2023.

The current Nunavik Sivunitsavut has graduated 43 students since it first opened.

Thirteen students enrolled this year in the program, which has been operating online due to COVID-19-related restrictions in Montreal.