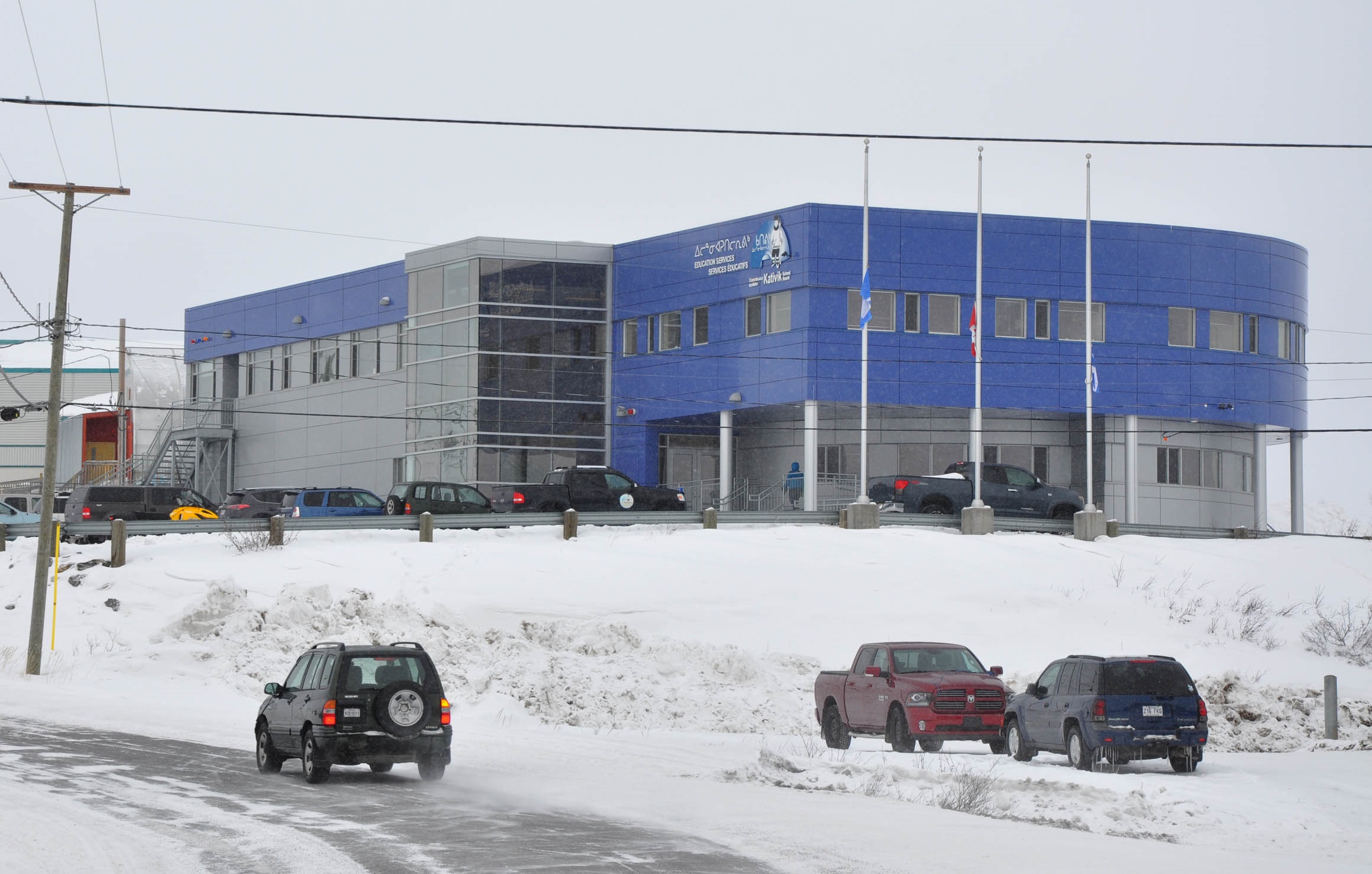 Kativik Ilisarniliriniq’s head office in Kuujjuaq. The Association of Employees of Northern Quebec, which represents Nunavik teachers and support staff, said its members showed overwhelmingly support for a strike mandate during a Wednesday vote. (File photo by Sarah Rogers)

Nunavik’s school board is offering some of its teaching staff a cash incentive to stay in the region over the winter holiday break, but some say the bonus discriminates against local and Inuit employees.

Kativik Ilisarniliriniq offers three paid annual trips south to its non-local staff, typically teachers who are hired from the south. Most of those teachers opt to return home to visit family during the winter holidays.

With the threat of COVID-19 and the need for travellers to quarantine for 14 days, KI has offered an incentive for staff to stay in the region over the holidays.

Non-local teachers say that, last week, they were offered a base amount of $2,900 to stay in Nunavik over that period, roughly the cost of air travel to and from the region.

Locally hired teachers and support staff—many of them Inuit—were offered $500 a week as compensation.

Mary Joanne Kauki, a veteran Inuktitut teacher at Jaanimmarik school in Kuujjuaq, posted a public letter on Nov. 13 criticizing the school board for creating an inequitable workplace.

“Many of my colleagues, local and non-local, really were frustrated with this decision,” Kauki told Nunatsiaq News.

“The southern teachers and staff are given a choice if they want to go south for Christmas and follow the protocol of a two-week self-isolation once they return in the new year, but those who wish to stay and the locals that do not really have a choice will have to begin work on schedule.”

Non-local staff who decide to travel over the holidays are even offered $100 a day by KI to leave their pets behind with a pet sitter.

KI’s schools in Nunavik are currently scheduled to close for winter holidays between Dec. 20 and Jan. 3.

Kauki said the holiday bonus is only the most recent example of inequity between local Inuit staff and their out-of-region co-workers, who already receive housing and a food cargo allowance when they move to Nunavik to work for KI.

The letter Kauki made public last week has been shared widely on social media and prompted a petition in support of equity for school staff in Nunavik.

“I want to make it clear that my sharing was in no way to devalue my colleagues who come from the south. I value them just as much as I value Inuit staff,” she said. “But years of experiencing a system that is set up to discriminate [against] local hires is exhausting.”

KI declined to speak to Nunatsiaq News, instead issuing a Nov. 17 statement in which the school board confirmed it approved those incentives on Nov. 9, with the goal of protecting Nunavik communities from the risk of spreading COVID-19 infection.

But KI also acknowledged that the incentives create disparities in the working conditions of its employees.

“These disparities are rooted in collective agreements that do not represent the interests of unionized Nunavimmiut and polarize our workforce along ethnic lines,” KI said.

“The uproar Kativik Ilisarniliriniq is now facing from employees who are not entitled to outing and housing benefits under their collective agreement very clearly illustrates the urgent need to change a system that blatantly discriminates against unionized Nunavimmiut,” the board said.

“We urge the Quebec government to hear us out, and support Kativik Ilisarniliriniq in addressing these issues at their core….”

The school board said it is working to address those gaps through current contract negotiations with its teaching and support staff, as well as through a case filed before the Superior Court of Quebec, in which KI seeks the right to negotiate working conditions directly with its employees.

The Association of Employees of Northern Quebec—the union that represents teachers and support staff at KI—said staff members, both local and non-local, have approached the union with concerns about the school board’s latest offer.

“The local staff are really mad, because feel like they’re worth less than their co-workers,” said AENQ President Larry Imbeault.

The union will meet with some of its Nunavik members this week to discuss the issue.

More broadly, Imbeault said the union has been trying to close the regional disparities gap between local and non-local hires for several years.

Imbeault said the union is currently negotiating a new contract for those employees since the most recent one expired this past March.

In past negotiations, Imbeault said the AENQ has tried, unsuccessfully, to secure housing as a provision for non-local KI staff.

Now, as part of these most recent negotiations, the union has dropped its demand for housing for local staff and is instead asking for rent subsidies for those employees.

The AENQ is also asking KI for a paid travel period for non-local staff and to have a food cargo allowance paid out to all KI staff.