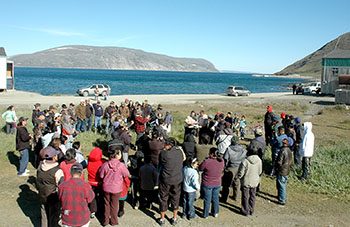 A team of about 20 hunters from across Nunavik set out in a number of canoes and speedboats from Kangiqsujuaq on August 19.

By early Aug. 22, the hunters started to follow an adult female whale about 20 km southeast of the community, said hunt leader Aloupa Kulula.

The bowhead whale was harpooned soon afterwards. However, the explosive device in the harpoon did not detonate, and so the hunters continued to pursue the whale into the evening.

“It was an unfortunate incident,” Kulula said. “But everything went well otherwise.”

The bowhead whale, seven feet (2.1 metres) longer than the bowhead caught last August, was towed to a site not far from the kill site on the same day to be butchered.

While the community welcomed the hunters and their catch to a cove nearby to Kangiqsujuaq last year, Kulula said the butchering was done at a distance this year — and as soon as possible after the hunt this year to ensure the meat stayed fresh.

In 2008, some meat went bad in the warm mid-August temperatures before it could be packaged and shipped.

“About 40 per cent of people here are unemployed,” Kulula said. “This meat will go a long way to help. This is an opportunity to provide country food to the community.”

The bowhead hunt is not for profit and will be distributed free to families across the region, he added.

Whale meat was being shipped out to other communities in Nunavik Monday morning.

No music festival was organized in Kangisujuaq this year in honour of the hunt, but the community is expected to gather and celebrate the return of the whaling crew.

Last year marked the first official bowhead hunt in Nunavik in nearly 100 years, after many began a push to see the hunt revived.

The federal department of fishers and oceans granted another hunting permit this year to hunters in Kangiqsujuaq.

“We issue the license, but we still rely on knowledge from the Inuit on what weapons are most effective,” said Patrick Vincent, a DFO spokesperson. “We have to find ways to ensure the hunt is humane.”

The DFO considered the bowhead population dangerously low for many decades, although a recent survey finally determined there are at least 5,000 whales in the Eastern Arctic — a population increase that hunters had already noted.

The DFO admits its population estimates of the bowhead are imprecise, but now says a controlled bowhead whale hunt will not put the species in danger.

In addition to the bowhead whale harvested in Nunavik, another three will be hunted in Nunavut.