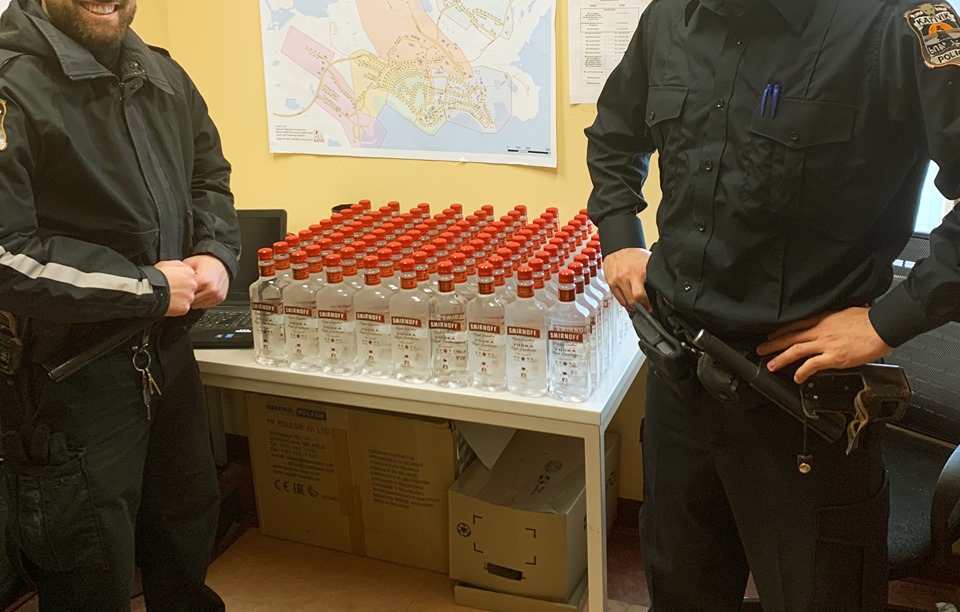 Police seized 90 750-mL bottles of vodka at the airport in Puvirnituq on Sept. 12. (Image courtesy of the Kativik Regional Police Force)

“Drugs and alcohol are coming into the community,” Kumarluk said during last week’s meetings of the Kativik Regional Government council.

“There’s uproar: people yelling here and there. There’s alcohol freely flowing into our community because there’s no restrictions at all.”

The issue of contraband was a major topic of discussion with representatives from the Kativik Regional Government during the recent council meetings.

Just a day later, on Sept. 12, three packages were seized by police at the airport in Puvirnituq containing 90 750-mL bottles of Smirnoff vodka.

“The Montreal police, we have a partnership, but for them to seize all of the alcohol in Montreal, it’s hard because it’s legal there,” said Morin. “Its’ bought legally at the (Société des alcools du Québec). So, we’re trying to work things out.”

Councillors also questioned the KRG’s department of transportation on stopping bootlegged alcohol from flying into their airports. An outside expert brought in to present on airport infrastructure clarified that searching checked baggage prior to boarding is beyond their jurisdiction.

The issue of alcohol entering communities isn’t limited to air passengers, said Salimuni Qavavauk, the regional councillor for Ivujivik. Regardless of airline passengers, he said, it comes in by mail.

From the force’s own statistics, there were more than 1,800 alcohol seizures this year into July, mostly involving 375 mL or 750mL bottles of hard liquor.

Police chief Jean-Pierre Larose echoed Morin’s point that policing alcohol brought into communities is complicated by the fact that its initial purchase is legal. However, it’s then resold illegally at an inflated price.

By comparison, those smaller-sized bottles that are most commonly seized, for vodka, retail at $12.75 and $21.95 in Montreal. In Nunavik, they’ll sell for $100 and $250, respectively, according to information provided by the KRPF.

Police estimate the packages seized by officers at the Puvirnituq airport had a street value of $18,000.

“We are working with Air Inuit and Canada Post to work something out,” Morin said. “It’s complicated, it’s not easy.” He added that there were upcoming projects with Canada Post to address the issue of alcohol entering communities.

Councillors voiced frustration that when tips are given to police, it doesn’t seem like they’re followed up on. While a single tip may not be enough to move ahead with a seizure or arrest, Larose said, they do build towards it.

“We are gathering a lot of information and I understand that it is very frustrating for you. It is for me,” said Larose.

“We cannot go and seize some drugs or alcohol by only some information. If you just said to us, “this person is selling go and arrest them,” we need warrants, we need proof, to gather information.”

Any information concerning suspicious activities, including the illegal sale of drugs and alcohol, can anonymously be disclosed to Crime Stoppers by dialling the following toll free number: 1-800-711-1800. Information received may qualify for a reward of up to $2,000.