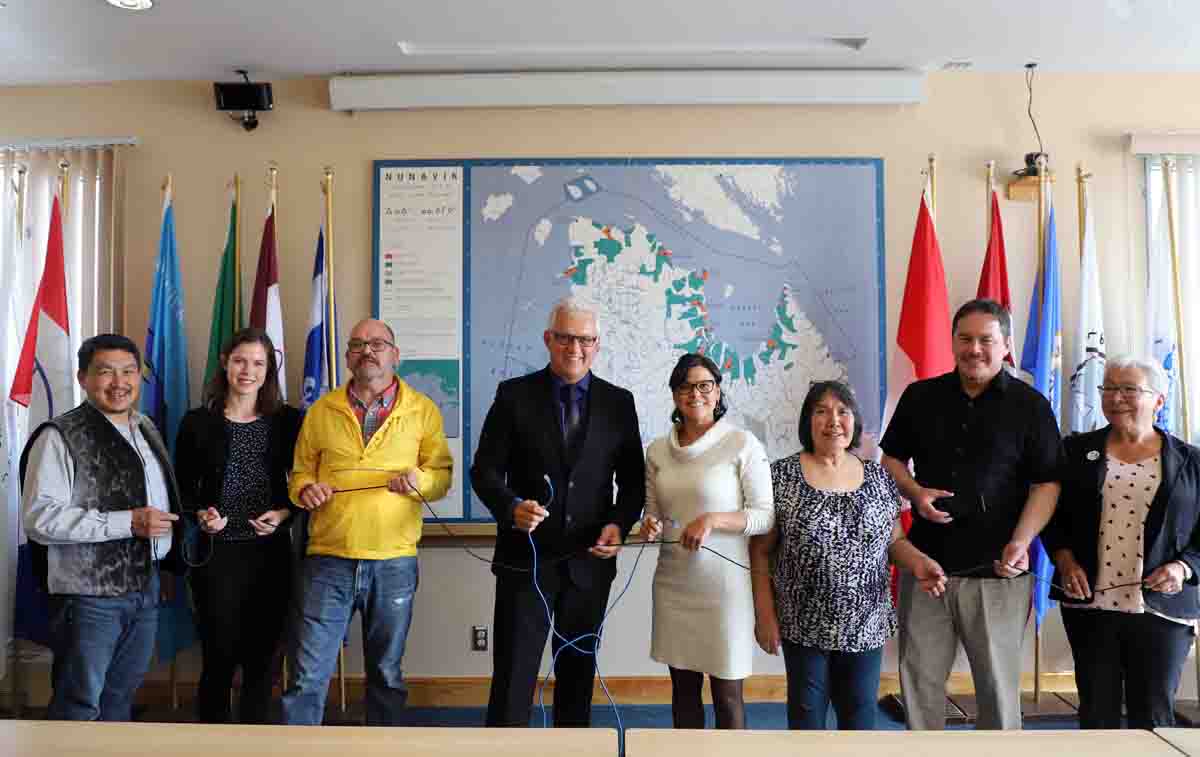 Nunavik regional leaders and federal officials pose for a photo in August 2018 at the announcement that the region would receive $125 million through the Connect to Innovate program. The Kativik Regional Government plans to boost the region’s internet speeds through a combination of fibre optic cables, microwave towers and surplus satellite capacity by 2021. (File photo)

The Kativik Regional Government says it’s moving onto its next step to bring a fibre optic network to Nunavik, with the installation of the fibre cable planned for this summer.

The KRG’s plan to bring high-speed internet to the region will rely on a combination of technologies, including fibre optic cables, microwave towers and surplus satellite capacity.

The regional government kick-started that process last summer, with a marine survey along the Hudson coast.

Now, the KRG and its Tamaani Internet are now preparing to issue a call for tenders for the installation of submarine fibre, said Daryl Combden, director of the KRG’s administration department, during regional council meetings in Kuujjuaq last week.

That undersea fibre optic cable is set to be extended from Chisasibi, in James Bay, north to Kuujjuaraapik, Umiujaq, Inukjuak and Puvirnituq later this summer, and is scheduled to be completed by the end of 2020.

The KRG has said it would consider extending the network farther north, to Akulivik, Ivujivik and Salluit, if its budget allows.

The work is being carried out through a $125-million investment from both the provincial and federal governments, through the Connect to Innovate program.

The KRG is also planning a high-capacity network linking Nunavik’s largest community, Kuujjuaq, to Schefferville, where the Naskapi First Nation is finalizing the installation of its own fibre optic network to southern Quebec.

Nunavik’s remaining communities will get surplus satellite capacity until the time when the region can extend fibre optic to all 14 villages.

The regional government says it hopes to connect the entire region to the network by 2025.

In addition to the work being done to boost Nunavik’s bandwidth, fibre-to-the-home technology is being installed in the remaining 10 communities that are using an LTE network for local distribution, which is designed to speed up capacity on congested networks.

While the KRG moves ahead with its high-speed internet plans, the regional government’s rollout of cellular services has been delayed, again.

The regional government is still working out issues with the software and hardware associated with the new network, Combden said, and can’t provide a rollout date for the new service.

Nunavik remains one of the few regions in the country without a mobile network—except in Kuujjuaq. Makivik Corp. delivered cellular service with Lynx Mobility to a handful of communities from 2010 to 2015, though both opted to end the contract after five years.

Ice Wireless is set to offer national and international roaming and cellphone service in the region through its parent company Iristel’s Canada-wide network.

Once the service is up and running, Nunavimmiut will have access to 3G/LTE technology, which supports internet-based apps and web browsing, on top of texting and voice calls.