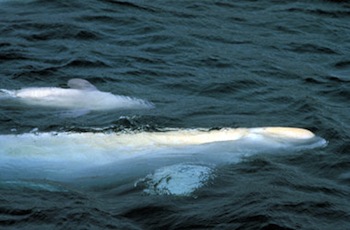 The Nunavik Marine Region Wildlife Board has now re-submitted its beluga management plan to Fisheries and Oceans Canada, requesting a response by the end of the month so Nunavimmiut can still enjoy a fall harvest. (File photo)

Nunavik’s wildlife authorities have submitted a revised beluga management plan to the federal government for approval, with the hope of getting the green light in time for a fall harvest.

The region’s most recent management plan, which specifies how beluga can be harvested in Nunavik, was in place between 2017 and 2019.

The Nunavik Marine Region Wildlife Board submitted a new plan to Fisheries and Oceans Canada in May. The board says the new plan balances Inuit harvesting rights and conservation of the Eastern Hudson Bay beluga stock.

But DFO Minister Bernadette Jordan rejected that plan in July over concerns related to conservation efforts, although the details have not been made public.

The wildlife board has now re-submitted a plan to address those concerns, requesting a response by the end of the month so Nunavimmiut can still enjoy a fall harvest.

“It’s been a challenging year,” said Tommy Palliser, executive director of the wildlife board.

“All the approaches before have been top-down, where DFO would come in with a plan and we would accept it,” he said. “But now we’re trying to turn it around where it’s more Inuit-led. That was really expressed at the [January 2020] public hearings.”

Under Nunavik’s 2017-19 beluga management plan, the region could harvest the equivalent of about 200 beluga whales from the eastern Hudson Bay stock—a population that was at the time considered endangered but has since stabilized. Under a complex formula, any beluga hunted outside the area was counted against that subspecies, but at a different rate.

The new plan proposes a shift from a mainly quota-based system to non-quota limitations, which can impose limits around the harvest season or the type of wildlife harvested.

The only area where the Nunavik wildlife board has proposed a total allowable take is in a region it refers to as the Hudson Bay Arc, which straddles the communities of Inukjuak, Umiujaq and Kuujjuaraapik.

The wildlife board has proposed a quota of 24 whales in that area. Any overharvesting in the region would be subtracted from the following year’s quota.

The rest of Nunavik would rely on non-quota limitations to ensure the eastern Hudson Bay stock is harvested less than other beluga subspecies in the region.

For example, the board proposed closing the Hudson Strait region to harvesting between Sept. 1 and Oct. 31, to discourage the harvest of eastern Hudson Bay belugas, which tend to migrate earlier than the western stock.

Because the eastern Hudson Bay stock mixes with other belugas at different periods of the year, the board has also said it will be “abundantly cautious,” tracking and monitoring harvest levels to ensure they’re not putting that subspecies at risk. Hunters will be required to report any beluga whales they harvest and provide samples of their harvest for ongoing monitoring, the board said.

A new DFO survey was scheduled to take place in 2020 but delayed due to COVID-19 restrictions; the department is expected to survey belugas in the region in 2021.

Finally, the Nunavik wildlife board requested special access to several estuaries that have been closed to harvesting for decades: the Mucalic, Nastapoka and Little Whale estuaries. The plan proposes allowing temporary access to harvesting in those areas for the purpose of passing on traditional knowledge, but the board must make those requests to the DFO for review.

The revised beluga management plan went back to the DFO on Sept. 28, Palliser said, and the board is hoping to hear back in the coming weeks.

“We have requested the response come before November, in order to allow for a fall hunting season,” he said.

“The fall harvest in Hudson Strait is very important.”