Nunavik’s school board has a new president

Kativik Ilisarniliriniq has a new president.

Sarah Aloupa was acclaimed president of Nunavik’s school board on Monday, Dec. 7, during a council of commissioners meeting in Kuujjuaq. 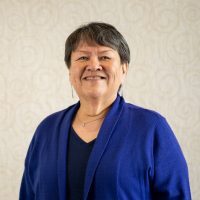 Aloupa replaces outgoing president Robbie Watt, who was not re-elected during the school board’s November elections.

Three other commissioners — Martin Scott, Sarah Beaulne and Jennifer Hunter — will fill out the rest of the five-member executive committee.

And following the Nov. 18 election, one new commissioner has since joined the council: Elisapie Aliqu Hubert of Akulivik, who was elected in her home community a week later.

This is the first meeting of Kativik Ilisarniliriniq’s new council of commissioners, which is meeting in Kuujjuaq this week. Nunatsiaq News is following the meeting by videoconference.

Council members are learning about their roles and responsibilities.

The school board’s director general, Harriet Keleutak, noted that she is the biological sister of Aloupa, KI’s new president — both women are from Quaqtaq but grew up in different families.

School board officials said the relation should be noted, but doesn’t necessarily create a conflict of interest.

“I would not just take a decision alone with Harriet,” Aloupa told council members. “I could have a preliminary discussion, but the two of us wouldn’t take decisions alone.”

Another council member suggested that an executive member should always be present when Aloupa and Keleutak meet.

But the board’s associate secretary general pointed out that discussions between the president and director general would almost always be in the context of an executive or council meeting.

The meetings run until Dec. 11.