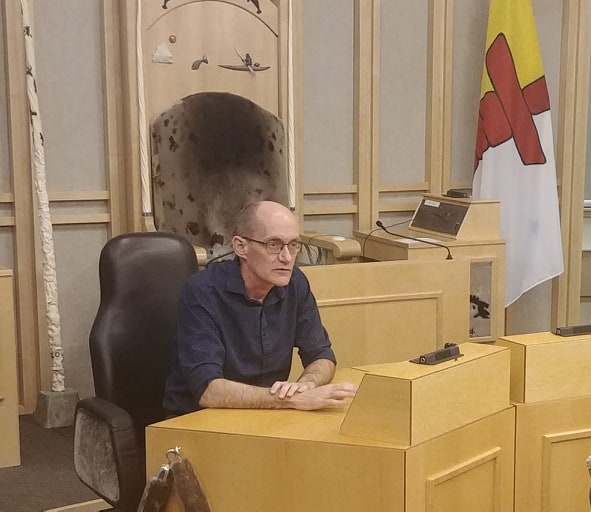 Dr. Michael Patterson, Nunavut’s chief public health officer, announced on Tuesday that a pilot project is starting this week to increase COVID-19 testing capacity in the territory. Once a reliable system of testing exists, the Government of Nunavut will look at possibly easing current public health measures. (File photo)

The Government of Nunavut is starting a pilot project this week that aims to speed up the turnaround time for COVID-19 test results in the territory.

Swabs from communities in the Baffin region will be sent to a lab at the Qikiqtani General Hospital in Iqaluit to be tested. The goal is to have results within five days of a person being tested.

“Increased in-territory testing capacity, combined with [a] shorter turnaround time for results will give us more flexibility with public health measures and improve our response in case of an outbreak,” said Dr. Michael Patterson, Nunavut’s chief public health officer, during a news conference on Tuesday, Sept. 8.

The GN has been working to increase its capacity to test for COVID-19 in Nunavut since the pandemic was declared in the spring. Iqaluit now has two testing machines up and running—a GeneXpert and a BioFire.

Rankin Inlet also has a GeneXpert machine and Patterson said its BioFire should be operational “sometime next week.”

The GN has hired a northern-based company called BBE Expediting to “track and expedite samples,” Patterson said. Test swabs will be sent to Iqaluit either by scheduled commercial flights or by arranging for a charter flight to pick them up.

“There’s a company that’s got a plane on standby to go to communities and pick up results from the health centres,” Patterson said.

People have been hired in communities to transport samples to the airport, and in Iqaluit to pick them up and deliver them to the lab.

“Once this system is in place and working we will begin the same process in Rankin Inlet,” Patterson said.

The goal is to have “more flexibility with public health measures and improve our response in case of an outbreak,” Patterson said.

This may include looking at changing the requirement for most Nunavummiut to isolate for 14 days at a hotel in a southern city before entering the territory.

But even when there is a reliable, expedient system of testing in place for every community in Nunavut, Patterson said that there will still be a requirement for people to isolate before or after entering the territory.

“That’s not going away anytime in the near future,” he said.

Other public health measures that may change with testing capacity in Nunavut include increasing the size of indoor gatherings and some physical activities that are still limited in size and capacity.

Nunavut had two GeneXpert machines up and running in June. However, there is a worldwide shortage of cartridges for these machines. That’s why the GN has been working to get the BioFire machines working in Iqaluit and Rankin Inlet.

These testing machines still need to be validated. To do this they have to test at least 15 positive cases of COVID-19, Patterson said. To make this happen before a possible outbreak, he said that Nunavut may get known positive samples shipped up.

For now, if the machines show a positive result, it will still have to be sent south to be verified. But Patterson said if there is a presumptive positive case found in Nunavut, “we are still going to act on that.”

Patterson said he did not know how much money had been put towards this pilot project. George Hickes, Nunavut’s minister of health and finance, said that this number will be better known after the project is up and running.

Patterson reiterated that testing for COVID-19 works within a system of public health measures that together minimize the risk of the disease entering Nunavut.

These include isolating after travelling outside the territory, staying home if you feel sick, restricting gatherings and social interactions, and frequent handwashing.