Review board concludes financial document not relevant to its final hearing 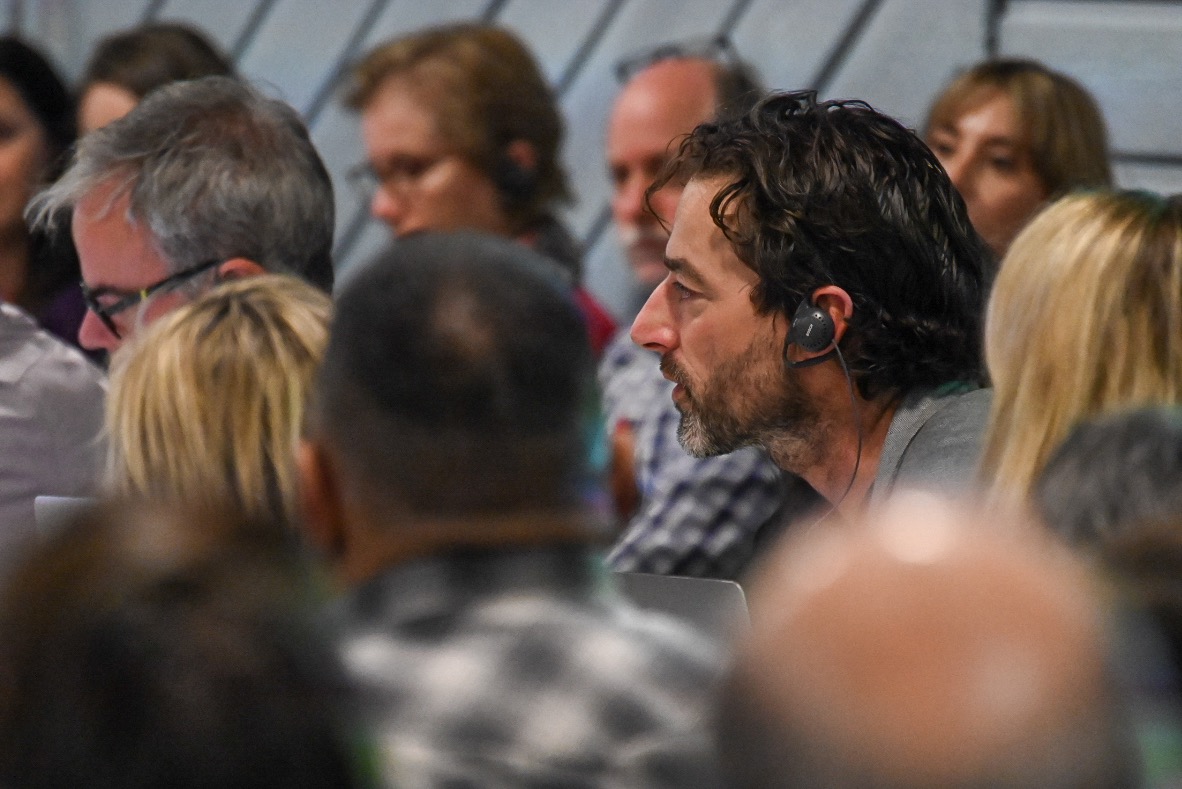 Chris Debicki, vice-president of policy development and counsel for Oceans North, presents Oceans North’s motion on Nov. 2 to suspend the NIRB’s assessment of Baffinland’s phase two proposal for expansion and allow for the filing of a preliminary offering circular from Baffinland and an affidavit from Oceans North researcher Georgia MacDonald. (Photo by Dustin Patar)

The Nunavut Impact Review Board has dismissed a motion from Oceans North to suspend the review board’s assessment of Baffinland Iron Mines Corp.’s railway-based phase two expansion plan for the Mary River iron mine.

In front of a packed audience in Iqaluit’s Cadet Hall, the board presented its ruling on the motion from Oceans North, and two other motions, during the late afternoon of Sunday, Nov. 3. A public hearing on the phase two expansion is currently being held in Iqaluit from Nov. 2 to 6.

The notice of motion filed by Oceans North on Oct. 29 asked the board to suspend its proceedings until the NIRB had the chance to review a document called a preliminary offering circular.

“The board finds that the preliminary offering circular is a confidential document that was not widely or publicly available and should not be posted on the board’s public registry,” Marjorie Kaviq Kaluraq, the board’s chair, said on Nov. 3.

“The board has concluded Baffinland’s communications about financing and forward-looking statements about eventual expansion plans is not relevant,” Kaluraq added.

In that document, which is a pitch to potential investors, Baffinland appears to tell investors that the company may use its proposed 110-kilometre railway to ship up to 18 million tonnes of iron ore each year through its port at Milne Inlet by 2021.

That’s in contrast to the 12 million tonnes of iron ore Baffinland has publicly said it will ship via the proposed railway as part of the phase two development.

In its motion, Oceans North also asked that the document be made public on the NIRB’s website, along with an affidavit from Oceans North researcher Georgia MacDonald.

That document did appear, on Oct. 29 and part of Oct. 30, on a public registry list related to the review board’s consideration of the Baffinland expansion proposal.

Oceans North alleged that regulators would not be able to properly assess the phase two expansion project, because Baffinland failed to disclose the full scale and impact of the project to both the NIRB and the public.

But Baffinland said the document raised a “confidentiality issue” and removed it from the NIRB’s public registry.

On Nov. 2, during the first day of the technical hearing, Oceans North presented its motion to the NIRB. About 100 people packed into Iqaluit’s cadet hall to watch the proceedings. All other intervenors in the technical hearing also had a chance to comment on the motion.

Brad Armstrong, legal counsel for Baffinland, told the board that although Oceans North has the right to be involved in the proceedings, its application to suspend the review was “without foundation.”

“They now want to simply throw a document on the table which is a very detailed financial document. Which is entirely outside of their interest, outside of their expertise,” Armstrong said.

“Oceans North knows full well that the application before you for phase two is a proposal based on 12 million tonnes…. The offering circular was a document prepared for banks and other investors who might want to lend money to the company.”

Armstrong added that the document was “clearly meant to be confidential.”

“There is some reference in the document that the company was looking at an expansion to 18 million tonnes, but that’s not what the offering circular says to the investors. It’s clear and truthful and transparent that the application is for 12 million tonnes…. It’s perfectly sensible and regular for a mining company to be taking a few steps ahead,” he said.

Chris Debicki, vice-president of policy development and counsel for Oceans North, said he would be happy to provide all the correspondence by which Oceans North obtained the documents and that the process they followed was legal.

“I think it will be clear that we did this in an open and transparent way and in no way breached any confidentiality,” Debicki said.

Debicki also rebutted Baffinland’s comment that the document was confidential and therefore should not be shared.

“There’s no rule that says I’m going to stop reading…. That’s not a legal argument. It’s just a scare tactic and this is bullying,” Debicki said.

“It’s a curious strategy, frankly … to say to the community and to say to the board, you can’t see information that we’re happy to share with potential investors.”

Both the Qikiqtani Inuit Association and Nunavut Tunngavik Inc. said they had not had time to review the preliminary offering circular could not take a position on the motion.

However, the QIA has filed a letter to the NIRB stating that they cannot support Baffinland’s phase two expansion.

But both Pond Inlet’s and Igloolik’s representatives, along with the World Wildlife Fund, supported suspending the proceedings and filing the preliminary offering circular on the NIRB’s registry.

“We are concerned in proceeding with the hearing if we cannot confirm, based on documents submitted by Oceans North, what Baffinland is considering to be the ultimate project scope for this development. We are considered that the Nunavut Impact Review Board may be limited in its assessment of the entire project during the proceeding” said Amanda Hanson Main, technical adviser for the Mittimatalik Hunters and Trappers Organization.

The board also ruled on a motion from the Mittimatalik HTO to add time to the agenda to allow intervenors to present during the hearing’s community rountable sessions.

The board also deferred a ruling on a notice of motion from Baffinland’s lawyers asking the NIRB for permission to file an 11-page summary of its consolidated financial statements.

That summary will explain why the project “cannot sustain production of 6 million tonnes per annum on an ongoing basis and that the Project is only financially viable at a greater rate of production,” the Baffinland notice of motion says.

But Baffinland told the NIRB they want that financial summary to be kept “entirely confidential” and that it should not be placed on the review board’s public registry.

The public hearings continue in Iqaluit at the cadet hall at 9 a.m. tomorrow morning and will be broadcast on Isuma TV.