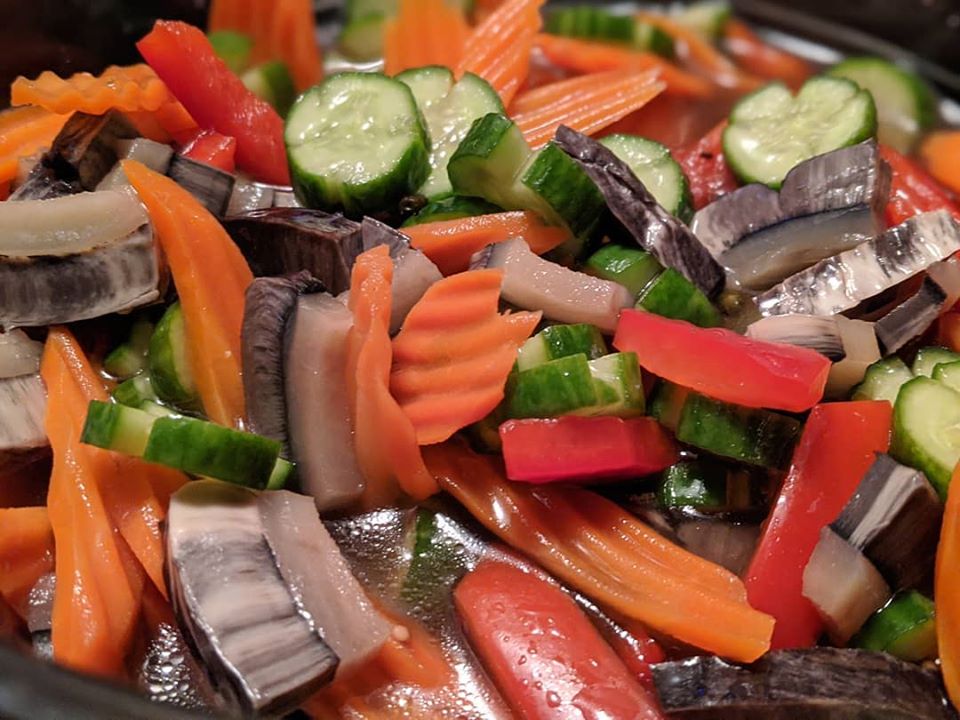 Iqaluit chef Sheila Flaherty continues to test out country food dishes after returning from Nuuk where she participated in the New Arctic Kitchen project. A recipe from her great-aunt Aana Darlene Kagak from Utqiagvik, Alaska, inspired this pickled maktaaq salad. But instead of using agvik (bowhead), Flaherty used allanguaq (narwhal) maktaaq from Grise Fiord. (Photo courtesy of Sheila Flaherty)

The well-known Nunavut chef married her long-time fiancé, became the first Inuk chef to design the menu for the Taste of the Arctic event in Ottawa and was elected to Iqaluit city council.

Then, last month, she earned a spot in a group of world-class chefs who immersed themselves in the world of delicious inuksiutiit—country food.

The New Arctic Kitchen project, organized by the Inuit Sila organization, brought Flaherty to Nuuk with other top chefs from Arctic and Nordic countries to prepare and learn about new recipes and foods.

Every day they spent time butchering and preparing muskox, caribou and seal meat. 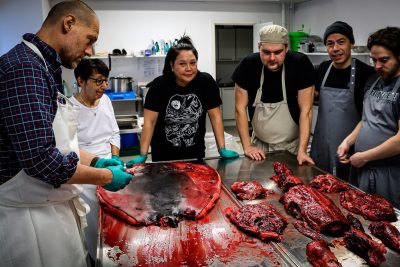 Sheila Flaherty, third from the left, works at butchering a seal into various cuts during the New Arctic Kitchen workshop in Nuuk. (Photo courtesy of Sheila Flaherty)

Flaherty said they experimented with submersing seal meat overnight in water: once in fresh water and once in salt water.

Defatted seal meat proved to be much milder either way, Flaherty said.

Flaherty plans to use some of these new seal preparation methods in the future.

“Maybe this would open doors to have a wider audience to have people eat seal meat,” Flaherty said.

Flaherty was in good company at the Nuuk workshop.

Participants included Inunnguaq Hegelund, an award-winning chef from Greenland; Mikkel Maarbjerg, a former head chef for several restaurants with Michelin stars in Denmark; Poul Andrias Ziska, the head chef of the restaurant KOKS in the Faroe Islands, which has two Michelin stars; and Viktor Eriksson from the Åland Islands restaurant Silverskär.

The Michelin stars are a rating of dining quality, with restaurants around the world promoting their status: only about 400 have two stars.

Before Flaherty had met Hegelund, a photo of one of his dishes had inspired her to try stuffing seal intestines with maktaaq and then parboiling and smoking them.

Flaherty said she had no idea she would be collaborating with him and other such noted chefs during the workshop.

To cap off their week in Nuuk, the group developed dishes for a gala meal. 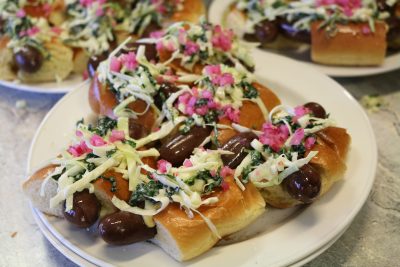 These seal hotdogs feature garnishes of pickled red onions, apple slaw and a crushed blueberry leaf mayonnaise. The dish was among the creations that flowed from the New Arctic Kitchen workshop in Nuuk. (Photo courtesy of Sheila Flaherty)

When it came time to think about what to make for the gala meal, the other chefs were quick to suggest elaborate dishes, Flaherty said.

But she decided to keep it simple and make a steaming uujuaq broth, with seal meat, fat and intestine, and seaweed.

“The Greenlanders really, really liked it. It was familiar to them,” she said. “I kept our inuksiutiit simple, as we usually prepare it ourselves.”

Overall, 2019 was a big year for Flaherty, a former MasterChef contestant in 2017.

“My network has expanded vastly,” she said.

Shortly after returning from Greenland, Flaherty participated as chef in a Canada Goose event on Toronto Island where the company showcased its parkas and introduced its invitees to new cuisine.

“All of the guests had never tried Inuit food,” Flaherty said, “So it was all a new experience for them.”

In 2020, Flaherty is now looking forward to another role, as the executive chef of Canadian North, and starting up her Iqaluit food-based business, Sijjakkut.

But, before that, there’s Christmas, which she plans to spend this year in Ottawa with her father, son and husband, and other friends and family members, where she will prepare some traditional southern foods of the season. Though like most Inuit heading south, she said, “I always pack a lot of food.”