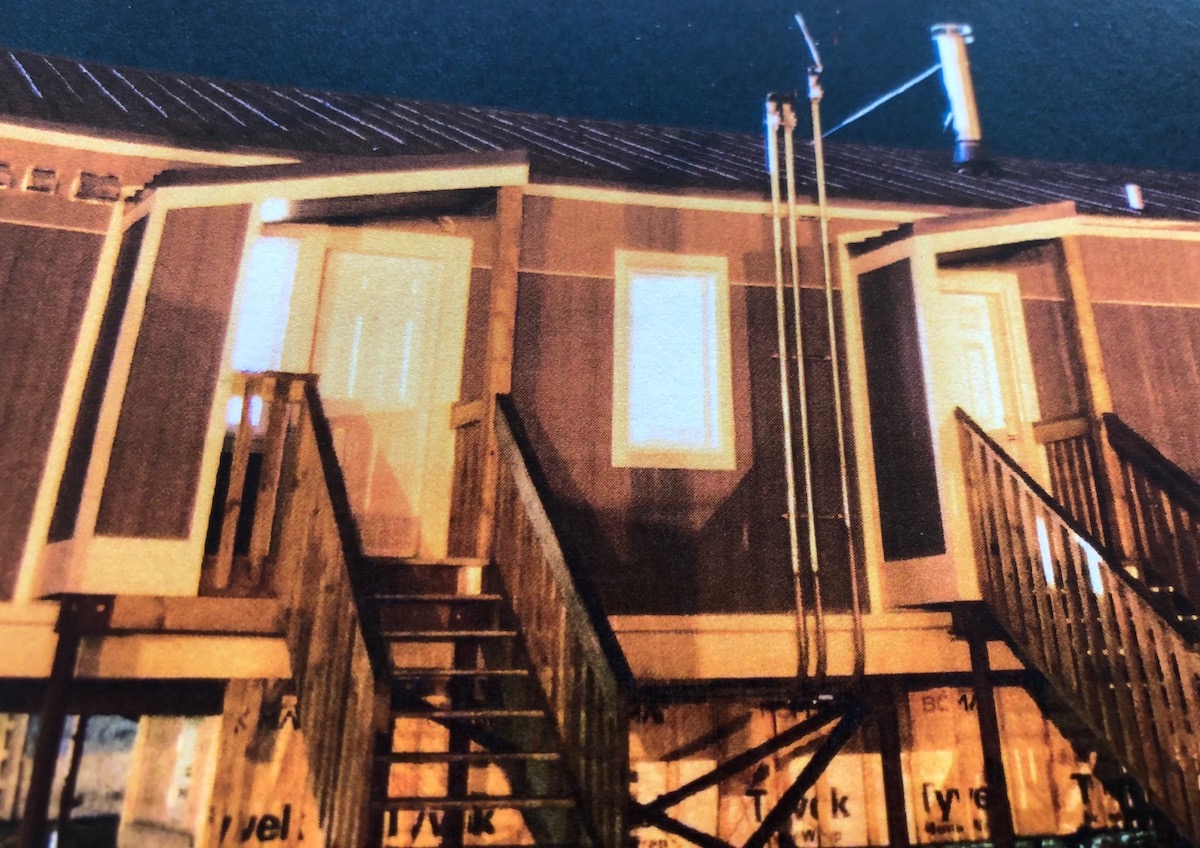 “Given the enormity of the territory’s housing needs, public housing on its own cannot provide the solution to the territory’s housing crisis,” states the Nunavut Housing Corp. in its 2017-18 annual report, whose cover features this illuminated row of housing units. The report was tabled during the recent sitting of the Nunavut legislature, along with three letters about the pressing need for housing in Taloyoak. (Photo courtesy of the NHC)

The need for more public housing in Nunavut is so great that the concerns of a housing authority in a western Nunavut community came up last week in the Nunavut legislature.

The board of directors of the Taloyoak Housing Authority said the single five-plex under construction in their community won’t go far in responding to its urgent public housing shortfall, in a letter to the Nunavut Housing Corp., tabled on March 12 by Netsilik MLA Emiliano Qirngnuq.

About one in five people in Taloyoak need public housing.

The housing authority’s chairperson, Christine Lyall, said Taloyoak currently lacks 94 housing units, for 228 people, who make up 23 per cent of the community’s total population of about 1, 000.

Of those 94 applicants for new housing, 17 have been waiting for more than eight years, Lyall said.

“We can expect this number to grow exponentially as more youth turn 19 and become eligible to apply for public housing,” she wrote to the NHC on March 8, in a letter copied to Qirngnuq and Nunavut Premier Joe Savikataaq.

In another letter, also addressed to the NHC, Lyall said there’s not even housing for their own staff. While the housing authority gets its money from the Government of Nunavut, they can’t use the GN’s two vacant housing units for staff, she said.

“This vacancy is in stark contrast with our territorial housing crisis where public housing applicants routinely wait five-plus years to get a unit,” Lyall said.

The Taloyoak Housing Authority asked for a review of the current policy regarding GN staff housing, so that housing authority staff can have access to GN housing in small communities like Taloyoak where “developed rental markets are non-existent.”

That’s a solution that would free up public housing units for the ones who need it the most, she said.

In another letter tabled at the legislature, Taloyoak’s mayor, Simon Qingnaqtuq, also wrote to Family Services Minister Elisapee Sheutiapik to ask for the community’s empty GN units to be used to offer the homeless shelter.

The NHC annual report for 2017-18, also tabled in the legislature, noted Taloyoak has a high need for housing, but its need is not the most critical in the territory.

That status goes to Kimmirut, Kugaaruk, Gjoa Haven and Arviat. These communities all have a housing need that is 50 per cent higher than their existing stock of public housing

Most of the planned housing construction, the NHC report said, 90 units, or 69 per cent of a planned 130 units, will go to those communities and others on the critical list.

The NHC ranks Taloyoak as having a  “high” need, as it lacks 40 per cent of the public housing it needs.

The report suggests that approaches such as home ownership, long-term federal funding, and partnerships with the private sector and regional Inuit organizations could help.

But numbers from the NHC report suggest most public housing tenants would not have the money to invest in housing of their own: 9,151 of 12,219 residents earn less than $27,041 and pay only $60 for housing per month.

Many have problems paying even this rent: across Nunavut collection rates declined to 83 per cent in 2017-18, NHC said.

About 3,000 new public housing units would be needed to meet Nunavut’s needs.