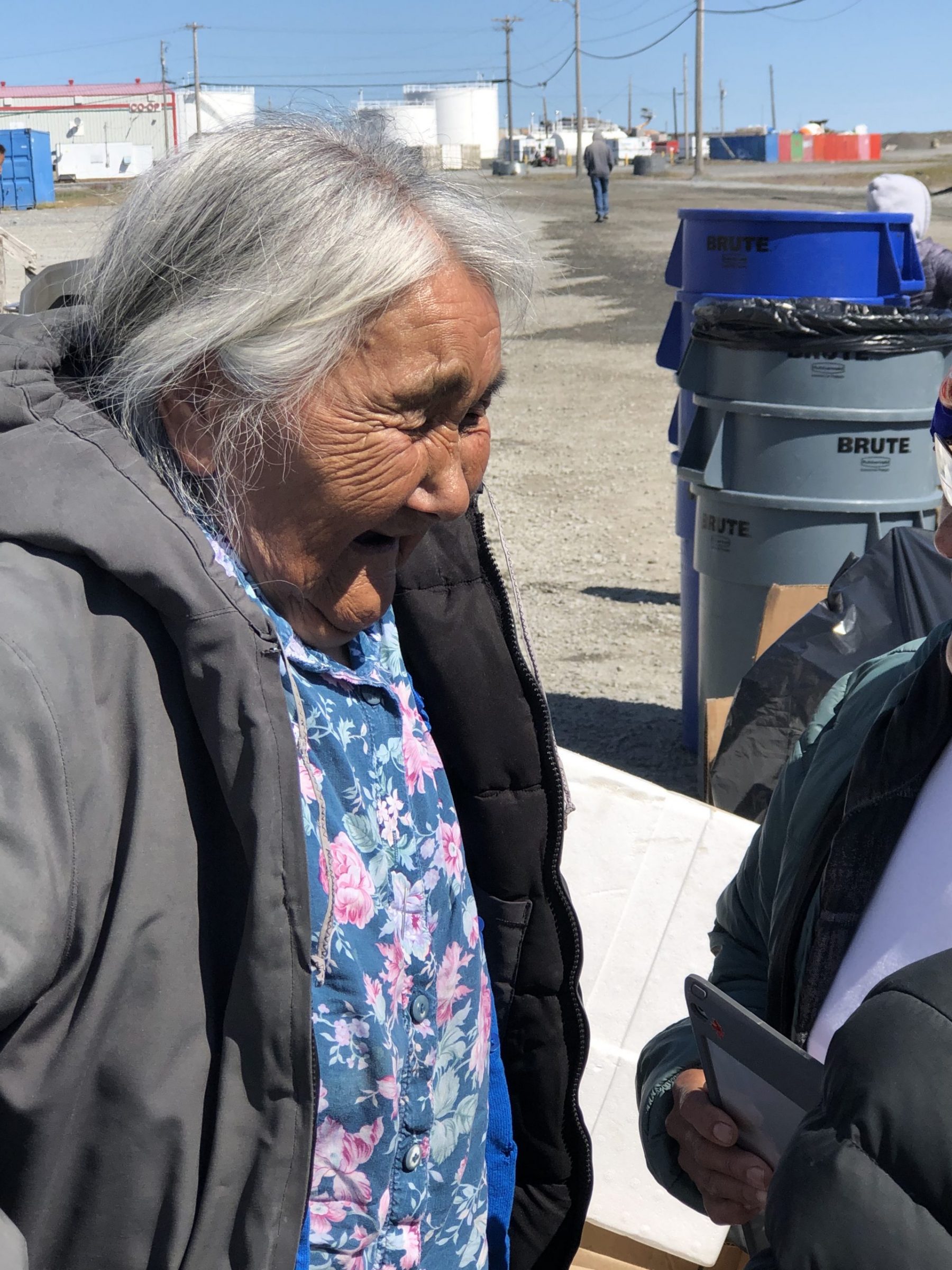 Mina Inuktaluk, pictured here at a celebration held for her on Aug. 3 in Sanikiluaq, served on the hamlet’s council for 45 years. (Photo courtesy of the Hamlet of Sanikiluaq)

Mina Inuktaluk, 89, is the oldest and longest-serving Sanikiluaq councillor

Inuktaluk, 89, is the oldest and longest-serving member of Sanikiluaq’s hamlet council. This year, after 45 years on council, she is set to retire.

Cookie, who was elected mayor of Sanikiluaq’s council last fall, often turns to his aunt for guidance.

And, even as she grew older, she would ride her ATV through town and out to her cabin, Cookie said with a laugh as he remembered.

Now, in retirement, Inuktaluk will still be an advisor to council.

“We, as council, want her to know that she can come to council meetings anytime she wants. She will be an advisory person if council is struggling in any way or they want to ask for traditional knowledge,” Cookie said.

But before Inuktaluk retired as a councillor, Sanikiluarmiut wanted to honour Inutaluk’s lifelong contributions to the community.

A community-wide barbecue was held on Monday, Aug. 3, followed by a parade through town in Inuktaluk’s honour. A “queen for a day” float was also made for Inutaluk.

Four hundred people in the community of about 900 showed up to the celebration. Inuktaluk was so overwhelmed that she did not participate in the parade, but set it off on its trip through town, Sanikiluaq’s SAO Alison Drummond said.

Inuktaluk was also honoured with a pension cheque, a certificate from Nunavut’s legislative assembly, a food hamper, a plaque and more. 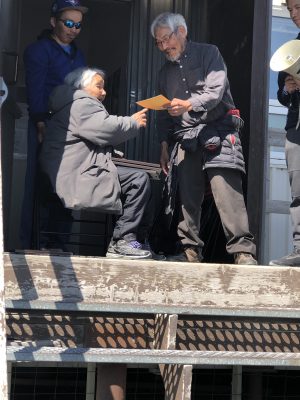 Johnnie Cookie, Sanikiluaq’s mayor and Mina Inuktaluk’s nephew, honours Inutaluk with a certificate at a ceremony held on Aug. 3. (Photo courtesy of the Hamlet of Sanikiluaq)

Inuktaluk grew up in Nunavik, near what is now known as Kuujjuaraapik. She came to the Belcher Islands, now known as Sanikiluaq, in 1954.

“There’s been a lot of changes since then. I first came to the Belcher Islands … when there were no houses. People lived in tents in the summer time and igloos in the winter. In 1954, some people even still lived in sealskin tents,” Inutaluk said, speaking to Nunatsiaq News through interpretation done by her friend Dinah Kavik.

Inuktaluk remembers being asked to join council before the hamlet itself was created. She was first elected in 1974.

During her early years on council, she remembers advocating to have schools built in Sanikiluaq.

“When people still lived in camps, they still had their language and their values instilled in them and then students started to leave for residential school,” Inuktaluk remembers.

“When the community council started, one of the things that we asked for was for school buildings to be built here so that there would be schools on the island.” 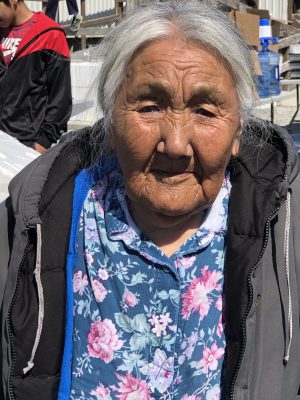 Mina Inuktaluk poses for a photo at a celebration held for her on Aug. 3. (Photo courtesy of the Hamlet of Sanikiluaq)

Another welcome and more recent change for Inutaluk is the addition of interpretation services for council members.

As a former Inuktitut teacher at the local schools, she said she hopes and wishes Inuit youth hold on to their values and traditions.

For Cookie, it was important to ensure his aunt could retire and still contribute to council. After all, she had dedicated half of her life to being a councillor.

“I’m an elder now, and in a very short time I will be reaching the age of where she is,” Cookie said.