“We serve the same people” 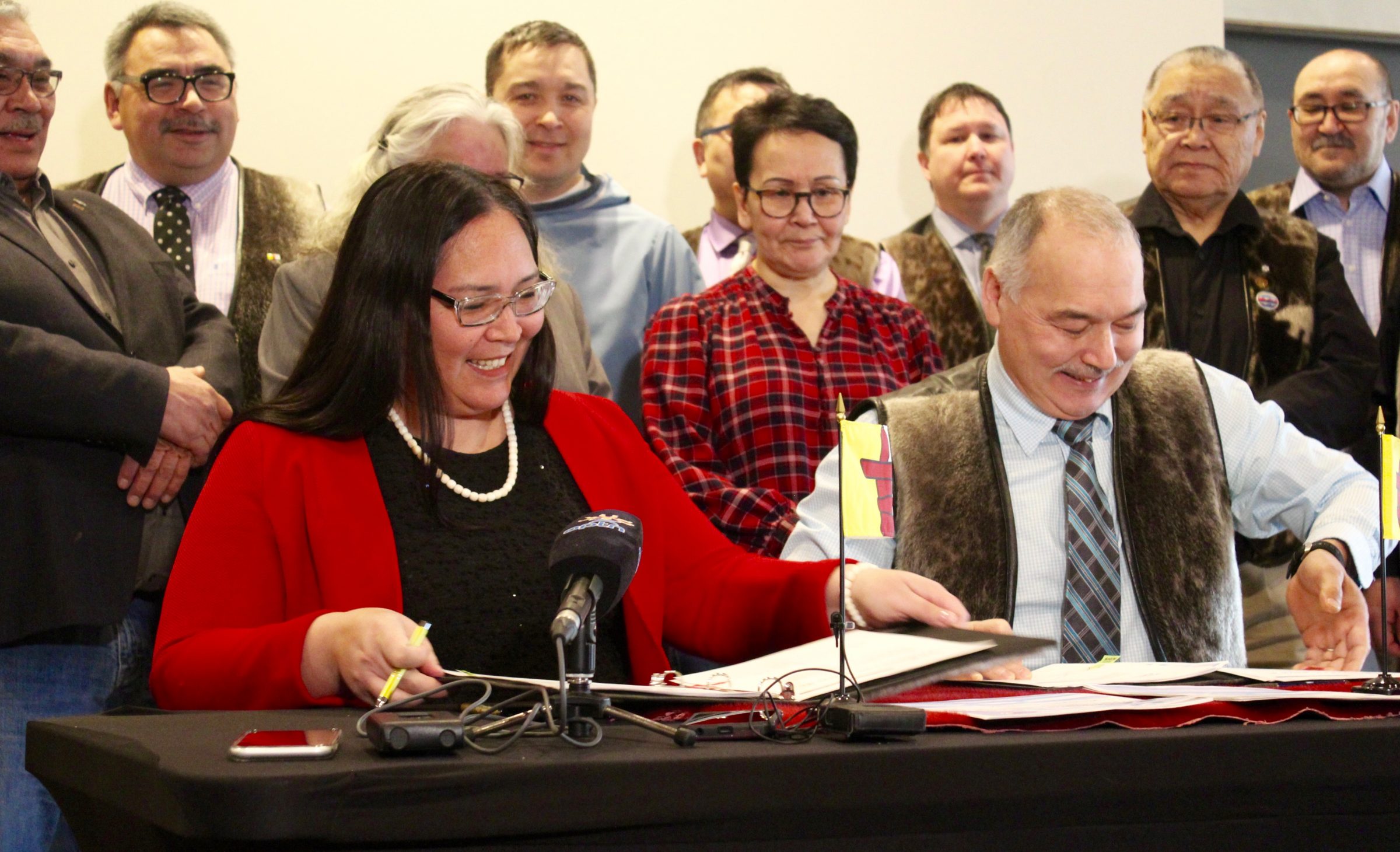 Surrounded by Nunavut cabinet and NTI board members, NTI President Aluki Kotierk and Premier Joe Savikataaq sign the Katujjiqatigiinniq Protocol at a ceremony held at the Frobisher Inn in Iqaluit on Tuesday, Jan. 21. (Photo by Emma Tranter)

The Government of Nunavut and Nunavut Tunngavik Inc. are renewing a two-decade-old agreement that describes how the two organizations will work together.

Flanked by cabinet members and NTI board members, NTI President Aluki Kotierk and Premier Joe Savikataaq signed the Katujjiqatigiinniq Protocol at a ceremony in Iqaluit on Tuesday, Jan. 21.

Katujjiqatigiinniq signals a shared commitment to work together to fully implement the Nunavut Agreement.

Savikataaq said the renewed protocol reinforces the GN’s commitments to work with NTI and sends a strong message to partners, such as the federal government.

“We both know that if we go with one strong voice that the odds of getting what we want are vastly increased,” Savikataaq said.

The protocol states it will help shape work around three areas: identifying broad principles and priorities that will contribute to productive working relationships, making practical commitments to leadership, oversight and administration, and working toward the full implementation of Article 32, which states that Inuit must participate in the development of government social and cultural policies.

With Nunavut’s 85 per cent Inuit population, Kotierk said it is important that the GN and NTI work together to serve the territory.

“We serve the same people,” Kotierk said. “Nunavut Tunngavik Inc. advocates for Inuit rights. The Government of Nunavut provides programs and services for Inuit. So it makes sense as partners that we would work together on joint priorities,” Kotierk said.

“I know since Nunavut has been created as a territory there’s been a number of protocol agreements and in that same vein, we thought it would be a good public signal of our recommitment to work together on issues that are important to Nunavummiut.”

There are three joint priorities identified within the protocol that the GN and NTI will focus on, Kotierk said.

The first is to mobilize Inuit identity and culture through ensuring Inuktut and Inuit culture are central to governance in Nunavut.

The first joint priority also touches on many aspects of education in the territory, including commitments to reform Nunavut’s education system to improve educational outcomes for Inuit, invest in training programs for Inuktut-speaking teachers, and develop curriculum materials in Inuktut for teachers.

The second joint priority is to improve the quality of life and well-being of Inuit.

That involves, among other things, developing and implementing Inuit employment plans, working with the Government of Canada and other partners on narrowing housing and infrastructure gaps, developing a long-term infrastructure strategy and establishing strategic partnerships with all levels of government, including foreign investors, for major infrastructure projects in Nunavut.

That’s in line with Article 32 of the Nunavut Agreement. The two parties will also create a GN Article 32 policy and a Joint Information Sharing Agreement, according to the protocol.

Kotierk also said the two parties will meet regularly as they continue to work on the three joint priorities.

“We recognize there will be times where we don’t agree on things, but we are still open to having those discussions and trying to get to a point where we have an agreement on what the best approach would be,” Kotierk said.

Savikataaq agreed, citing the recently signed devolution agreement as an example of where the two parties are working collaboratively.

The GN and NTI previously entered into the Clyde River Protocol in 1999, Iqqaanaijaqatigiit in 2004 and Aajiiqatigiinniq in 2011.

So why this new protocol now?

“It’s a new decade,” Kotierk said, to a round of applause from the room.