Nunavut men survive after canoe capsizes, thanks to nearby rescue crew 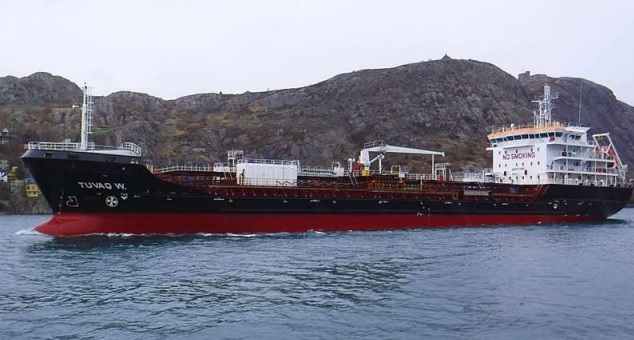 Coastal Shipping Ltd.’s Tuvaq W was stationed just outside Baker Lake on July 23 when a canoe capsized nearby. A crew from the ship was deployed to rescue two men, who were treated at the community health centre and released. (Photo courtesy of Coastal Shipping Ltd.)

Nunavut RCMP say that two Baker Lake men survived a boating accident last week thanks to help from the crew of a nearby ship.

On the morning of July 23, two men set out from the Kivalliq community by canoe. They were only about a kilometre from shore when the canoe capsized, sending both men into frigid water, the RCMP said in a July 29 news release.

The Coastal Shipping Ltd. vessel Tuvaq W happened to be within sight, and the ship’s captain immediately sent a rescue team to recover the men.

“Within fifteen minutes of capsizing, both males were successfully brought aboard by the crew of the Tuvaq W and were provided with immediate first aid,” the RCMP said in the release. “Fortunately, the men were both wearing personal floatation devices at the time of the incident.”

The Baker Lake RCMP and the community’s search and rescue crew also assisted with the rescue.

Both men were transported to the community health centre where they were treated and released, the police said.