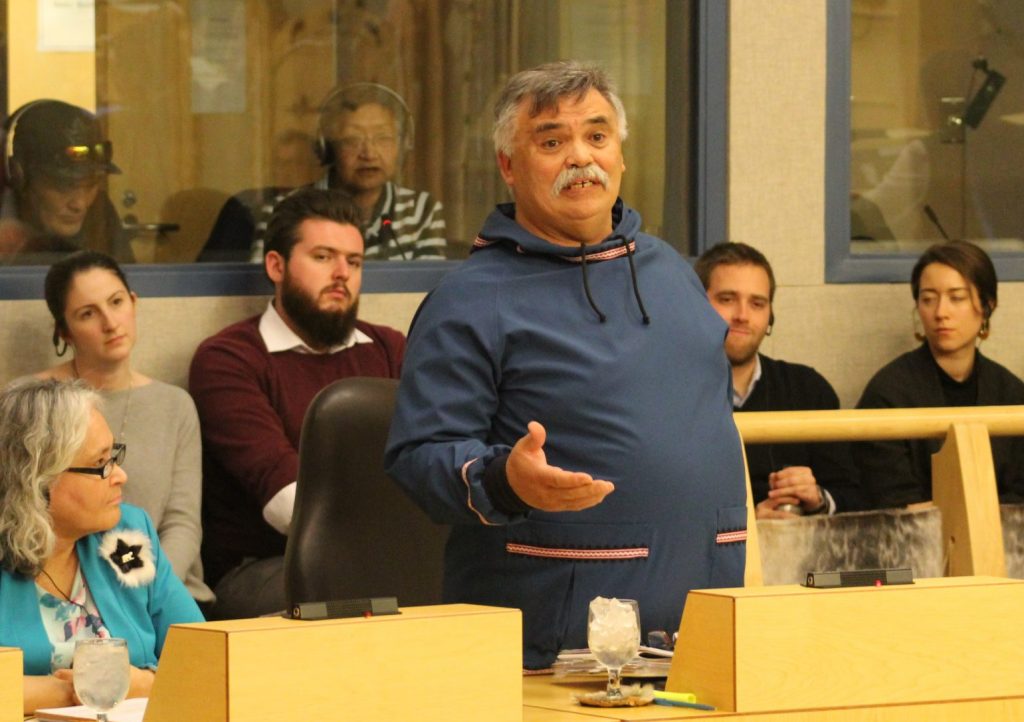 Lorne Kusugak, Nunavut’s minister of Community and Government Services, says his department does not play favourites when it awards contracts through requests for proposals. (Photo by John Thompson)

Lorne Kusugak rose in the legislature on a point of privilege last Friday to correct what he says is an inaccurate statement made by Lightstone in a May 28 Nunatsiaq News article.

The article discusses Lightstone’s reaction to answers he received from Kusugak to written questions he tabled in the legislature on March 4 over the department’s contracting practices.

Kusugak specifically took issue with Lightstone saying, “It’s quite easy to manipulate specifications and requirements of RFPs to basically write it so that one pre-selected vendor could qualify for it.”

“There has been no evidence provided of such fraudulent activity happening in the department and, if anyone is aware that there is, it is critical for them to make either myself, this legislature, or the appropriate policing authorities aware of it,” Kusugak said last Friday  in the legislature.

Kusugak said accusing the department’s employees of wrongdoing in their procurement practice is a very serious accusation and questions his credibility as minister.

The issue came up again during Tuesday’s sitting when Lightstone rose to ask Kusugak how often his department receives complaints of potential bias in requests for proposals, or RFPs.

“I don’t know how often, but on occasion there are questions raised on procurement,” Kusugak responded.

“The minister has just admitted that the Department of CGS has received complaints about bias in RFPs,” Lightstone said.

Lightstone said he believes the minister does have evidence of bias in RFPs and asked Kusugak again how often complaints about these biases are received.

“I guess we could twist words how we want to twist them,” Kusugak said in response.

Kusugak added that his earlier comments referred to the fact that if the department receives questions about a contract in an RFP, the department will “put an addendum in the contract to say that we were asked about this particular thing.”

Lightstone asked if Kusugak could share how many complaints his department has received about biased RFPs and if going forward, that information could be shared in its procurement activity report.

“The issue my colleague wrote to me about is an issue I won’t go too far into, but every person who wants to bid on a contract has the right to ask, “How come you’re asking for this kind of licence to do the activity?” I don’t think that is a bias if you’re asking for someone with a heavy equipment operator licence to go on a contract for snow removal,” Kusugak said.

“I will look, but I’m pretty sure that our department of procurement in Community and Government Services has not been charged, sued, or found guilty of any wrongdoing, I’m not aware of any cases where they are liable for such action that my colleague is accusing them or assuming they are guilty of bias,” Kusugak said.