“It’s important because these are cross-border caribou herds”

Once there were hundreds of thousands of barren-land caribou in the area now lying between the Northwest Territories and Nunavut. Now their numbers have dropped to new lows, encouraging the two jurisdictions to work together to improve caribou management. (Photo courtesy of the GNWT)

The governments of the Northwest Territories and Nunavut are working on a new agreement to better manage the Bluenose East and Bathurst caribou herds.

The consensus to move ahead on jointly managing both herds was reached after representatives from the two jurisdictions met recently in Kugluktuk.

Officials from Nunavut and the N.W.T. are now fine-tuning the terms of a memorandum of understanding, Savikataaq said. 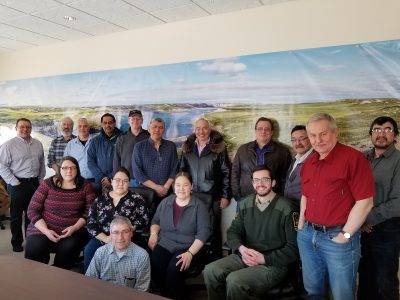 Representatives from Nunavut and the N.W.T. met earlier this month in Kugluktuk to discuss how to better manage caribou. (Photo courtesy of the GN)

The MOU moves beyond the current research agreement in place, he said, and includes monitoring efforts and the creation of a working group that could, for example, recommend harvest levels or even that no caribou be hunted.

At the two-day meeting, on April 15 and April 16, a lot of discussion focused on predator control as one way of increasing caribou herds’ size.

In the N.W.T. a traditionally skinned wolf pelt can bring a hunter more than $1,200. Now, there’s a plan to see $900 funnelled to Nunavut hunters who kill wolves in the N.W.T., Savikataaq said.

In the Kitikmeot, hunters receive $300 per wolf pelt, but officials will work on a way for Nunavut hunters to get the money for pelts hunted in the N.W.T. as quickly as possible, Savikataaq said.

The plan is expect come into force next year, he said.

The drive to improve caribou management comes as the numbers of the Bluenose East and Bathurst herds have nosedived and the federal government is looking to change the status of barren-ground caribou to “threatened” with extinction.

The GN is opposed to listing caribou as a species at risk because the species naturally follows a 40 to 50 year population cycle, with booms and busts, Savikataaq said.

“We just have to be careful when they’re on their down side by not over-harvesting,” he said.

But that’s not easy.

“We have much better technology and equipment than 50 years ago,” said Savikataaq, noting that with dog teams there was no caribou hunting when the herd numbers dropped, because hunters couldn’t get to the animals.

“So (now) we have to manage the people when they’re on the low cycle,” he said.

If Ottawa decides to list barren-ground caribou as endangered, each province or territory that has caribou would have to come up with a recovery plan.

“That could take a while,” Savikataaq said. But the agreement with the N.W.T. is would be first step.

According to 2018 surveys, the overall trend for the Bluenose East and Bathurst herds is not good. 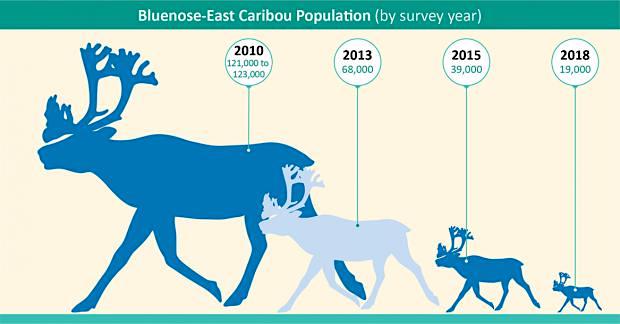 In 2016, in response to the herd’s population drop, the Nunavut Wildlife Management Board held a hearing. This ended up with the GN’s endorsement of a community-based caribou plan for Kugluktuk that included a harvest limit of 340 caribou, with no gender specified.

The Kugluktuk HTO also agreed voluntarily to put various limits on hunting activities, such as no organized community hunts, no sale or purchase of caribou meat under the HTO’s country food distribution program and no sports or commercial harvest of Bluenose East caribou.

Recently, after he shared those forecasted numbers at a meeting in Behchoko, the Tlicho Government and the GNWT proposed lowering the harvest of the herd in the Wek’eezhii region from 750 caribou to 300.

Similar cuts could be coming to the Bluenose East hunt in Nunavut, Savikataaq suggested—although, as it stands now, Kugluktuk hunters don’t manage to take their allowable harvest from the herd. 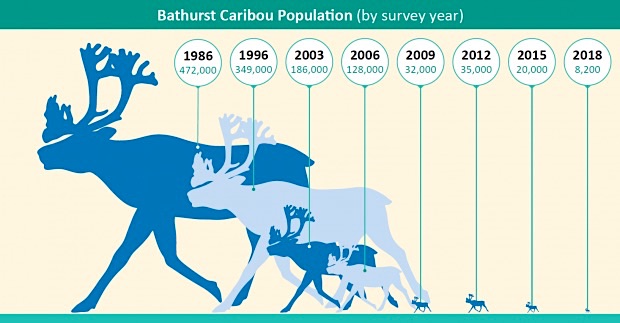 This graphic from the N.W.T.’s Environment Department reveals the extent of the population drop of Bathurst caribou.

While there is no hunting of caribou from the Bathurst herd at all in the N.W.T., for now, Nunavut still allows a limited hunt of 30 animals.

Caribou management is a big issue not just in Kitikmeot region, but throughout Nunavut: it was a major topic of discussion when Savikataaq met April 26 with Nunavut Tunngavik Inc.’s Nunavut Inuit Wildlife Environment Advisory Committee.

Most of the challenges to caribou are specific to the regions—such as few caribou in the Baffin region and caribou meat sales in the Kivalliq—but the impact of development on caribou populations remains concern for all regions, he said.

So NTI wants to hold regional caribou meetings, and get some feedback first before possibly organizing a territory-wide meeting on caribou.