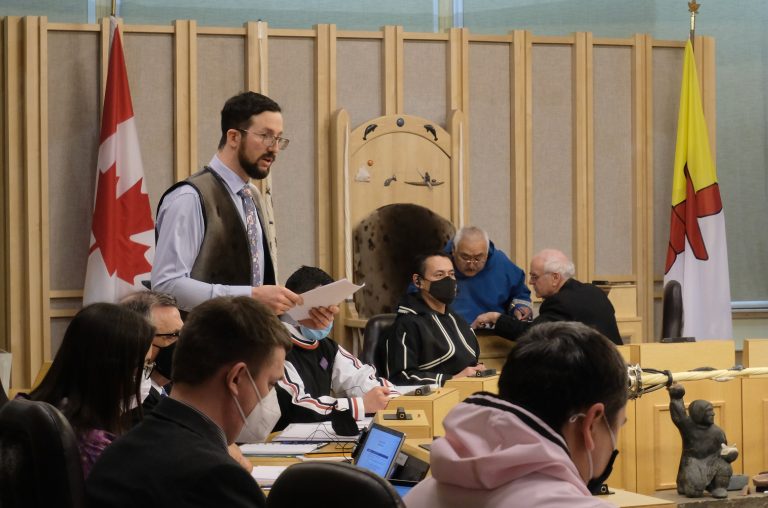 Health Minister John Main, speaking in the legislature during the recent winter sitting, says his department is working on a regional action plan with Nunavut Tunngavik Inc. that will tackle tuberculosis in the territory (Photo by Mélanie Ritchot)

The Government of Nunavut is in the final stages of working with Nunavut Tunngavik Inc., on a plan to tackle tuberculosis in the territory, according to Health Minister John Main.

Main answered a question posed by Arviat South MLA Joe Savikataaq on March 18 in the legislative assembly. He asked why the GN had only accessed $2.5 million from NTI when the organization had $13.8 million available to fight tuberculosis.

That funding is part of a 2018 federal government commitment that pledged $27.5 million over five years to eliminate tuberculosis in Inuit Nunangat.

NTI’s money is tied to a regional action plan, and additional funding will be available when that is established, Main said.

“It’s something that we are fully committed to seeing move forward in terms of reducing the prevalence of TB in Nunavut,” he said.

Tuberculosis infection rates were more than 290 times higher among Inuit in Canada in 2019 than among Canada’s non-Indigenous population, according to research by the Public Health Agency of Canada.

Most cases are due to social and economic factors related to health, such as overcrowded housing, a lack of access to food or transportation infrastructure, states the agency.

The $2.5 million already given to the GN was tied to community screenings, which have been completed in three communities.

These screenings are logistically complex, Main said, and his department is reviewing whether community screening is the best way to tackle tuberculosis.

Work on a final agreement between the GN and NTI will also include the sharing of information, Main said.

Nunavut’s Information and Privacy Commissioner recently recommended the GN disclose tuberculosis statistics at the community level with some restrictions.

Main said in the legislature on March 11 that disclosing cases at the community level is still too much of a privacy risk, but said the GN could disclose tuberculosis cases at the territorial level quarterly.

He added the GN can work with NTI and hamlets on what tuberculosis information can directly be shared with communities.