Ottawa promises to eliminate TB from the Inuit homeland by 2030 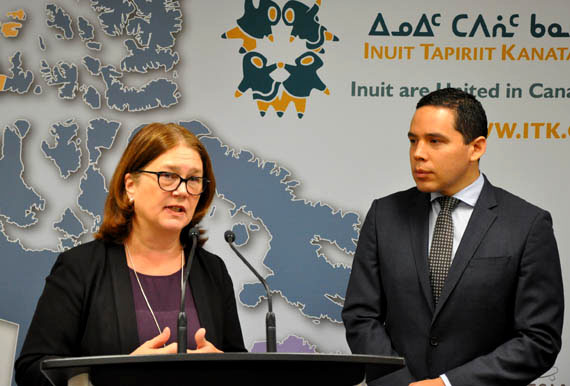 Indigenous Services Minister Jane Philpott, at a March 23 press conference in Ottawa, promises the federal government will eliminate tuberculosis from Inuit Nunangat by 2030. She’s flanked by Inuit Tapiriit Kanatami President Natan Obed, who worked with the federal government on the issue through the Inuit-Crown Partnership Committee. (PHOTO BY SARAH ROGERS)

OTTAWA—The federal government committed itself yesterday to eliminating tuberculosis from the four regions of Inuit Nunangat by 2030.

Indigenous Services Minister Jane Philpott made good on a January pledge to set a timeline for the government’s plan to eradicate the infectious disease in the North, where Inuit suffer rates of TB infection that are 270 times higher than among Canada’s non-Indigenous population.

Philpott also committed the government to reduce the number of active TB cases by at least 50 per cent by 2025.

“This will require a number of initiatives and we are putting all the pieces in place.”

The efforts are led by the TB task force—a body that grew from discussion within the Inuit-Crown Partnership Committee last fall.

Many elements of the group’s strategy have already been acted on, Philpott said.

That includes a major TB screening clinic in Qikiqtarjuaq this month, where approximately 10 per cent of the population is infected with TB and where 15-year-old Ileen Kooneeliusie contracted and died of the disease in 2017.

Following the launch of the clinic, 90 per cent of the people of Qikiqtarjuaq were screened, Philpott said, noting she’d like to see the same clinic visit other northern communities.

Other initiatives already underway to fight TB in Inuit Nunangat:

• Public awareness campaigns, aimed at helping the public recognize symptoms of tuberculosis and addressing the stigma associated with the disease. The Nunavik Regional Board of Health and Social Services, for example, has just launched a major video and audio capsule campaign largely directed at youth.

• Health Canada has added rifapentine to its list of drugs that can be used to meet urgent public health needs, with Qikiqtarjuaq serving as its first major roll-out. The drug is taken weekly over 12 weeks, compared to other TB medications that are taken daily over a nine-month period.

• Philpott said that since the TB task force launched, it has overseen specialized TB prevention training for 40 health workers in Nunavut and TB screening training for 50 nurses who work in Nunavik.

Those initiatives are funded with $27.5 million from the 2018 federal budget allocated to TB treatment and prevention in Inuit Nunangat, in additional to another $509 million allotted to public health programs and data collection.

Philpott acknowledged that overcrowded homes and the shortage of housing in the North are major factors contributing to TB.

She pointed to the $400 million the federal government allocated to Inuit housing in its latest budget, but she also noted the issue needs more than just money, like creative housing design and a new approach to home ownership.

When the task force first formed, Philpott cited Kooneeliusie’s death as an important turning point in the fight against the TB.

Since then, a coroner’s report has confirmed that a 21-year-old man from Nunavik died from TB in June 2017.

And more recently, a 14-year-old boy from Nain is believed to have died from TB, though his death is still under investigation.

“That absolutely shouldn’t happen,” Philpott said. “But these stories of young people dying of TB in the 21st century are what has driven our work.”

Dr. Gonzalo Alvarez, an Ottawa based TB specialist who works in Nunavut, said he was encouraged by the government’s commitment to fighting TB in the North, but also called the work “a Herculean task.”

“It’s a change from the word ‘control’ to the ‘eliminate,’” he said. “I think that’s a massive step forward.”

Speaking at the March 23 news conference, ITK president Natan Obed talked about the traumatic relationship many Inuit have with TB, from the first wave of the disease in the North which sent Inuit to southern hospitals, some of whom never returned home.

“We all have our stories,” he said. “This is the relationship we’re hoping to repair.” 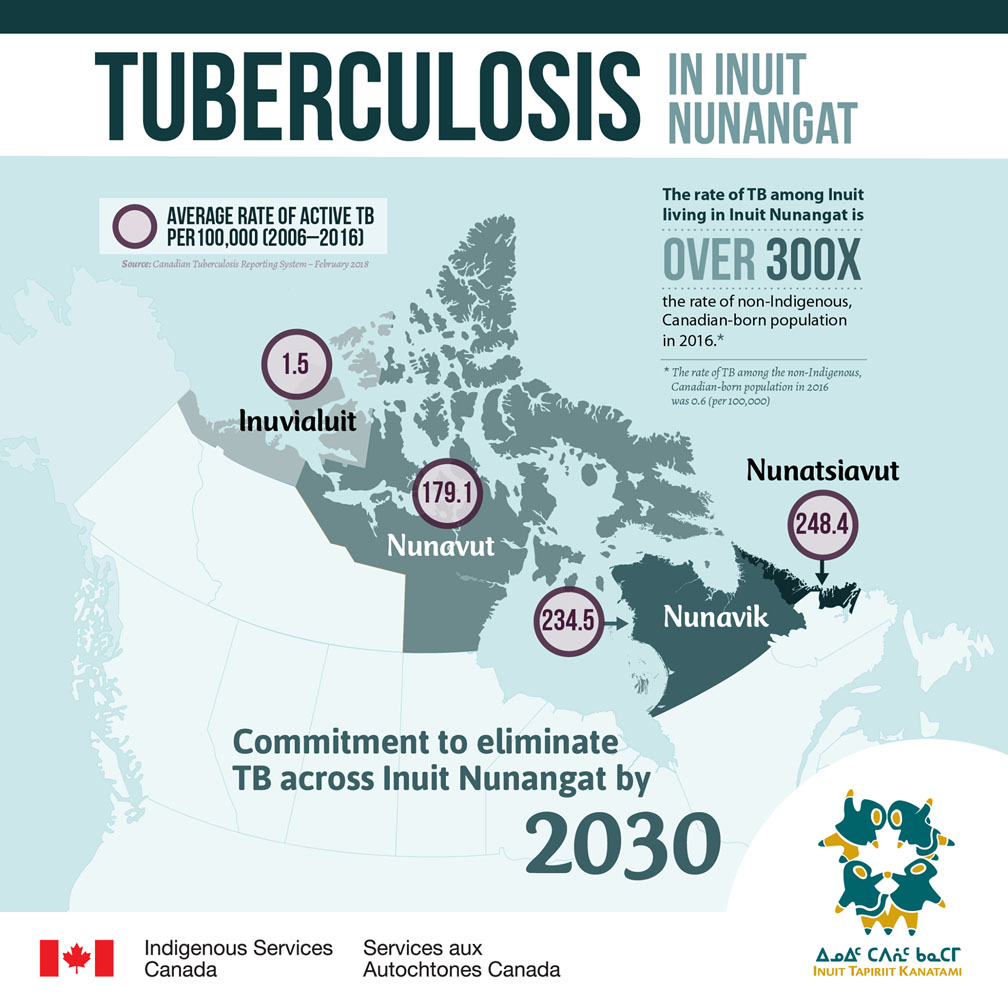 Indigenous Services Minister Jane Philpott and ITK President Natan Obed have promised to eliminate tuberculosis from Inuit Nunangat by 2030, and to cut infection rates in half by 2025. They made the announcement one day before World Tuberculosis Day, which this year falls on March 24, today. (IMAGE COURTESY OF ITK)