“We need 30 more members in Nunavut” 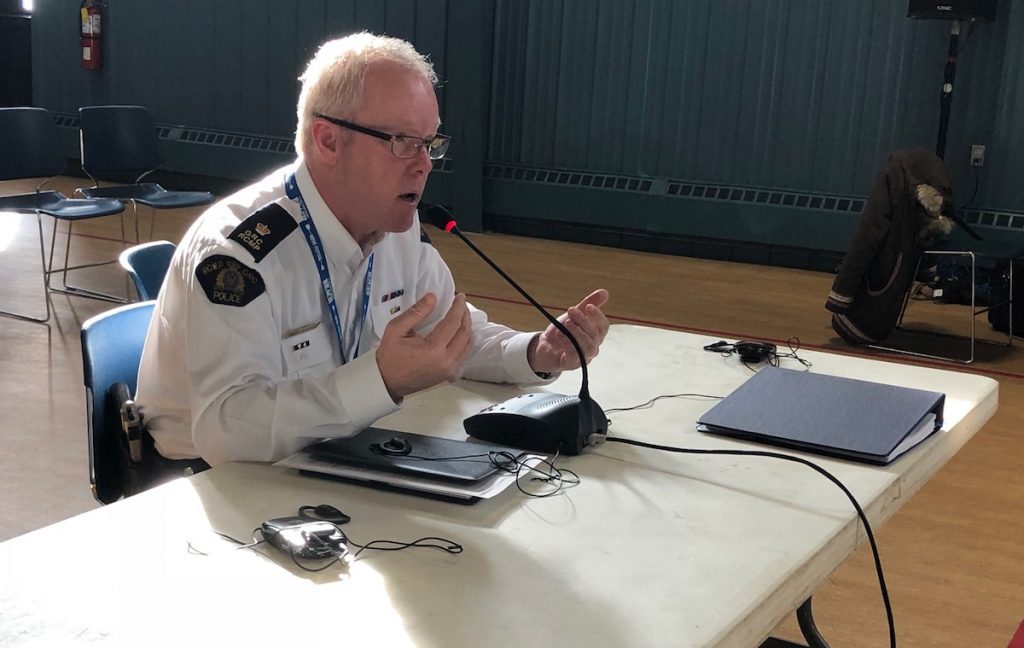 RCMP Inspector Mark Crowther speaks to a gathering of Baffin mayors at Iqaluit’s Cadet Hall, telling them the RCMP in the territory could use 30 more officers. (Photo by Jane George)

The RCMP in Nunavut say they need 30 more officers to do the job of policing the territory.

This came from, Mark T. Crowther, the RCMP’s inspector of criminal operations, on Wednesday, March 27, during a meeting of Baffin region’s mayors in Iqaluit.

The Nunavut RCMP includes 25 detachments and 185 employees, but recently the workload has increased, Crowther said, from 95,000 working hours a year to 125,000 hours.

Offences are “going up and up,” he said.

The two issues were brought home by Igloolik’s mayor Celestino Iyerak. who said at the meeting that alcohol is out of control in his community of about 1,700.

Iyerak said that last Saturday he received numerous telephone calls from elders and parents who wanted to see if it was possible to have their drunk family members put into RCMP cells to sober up.

But there was no room in the two-cell detachment.

To make room, police had to release some detained residents before they were completely sober, Iyerak said.

“This is something we have to look at,” Crowther said.

That same issue often comes up in Iqaluit, where there are only nine cells, and police sometimes have to put drunk people in the van, he said.

However, to build new cells would cost millions and the RCMP is “fighting for a piece of the pie,” he said.

This situation is also taking place against a background of alcohol bootlegging into communities.

Many send alcohol to restricted communities by mail—filling the bottles to the top and stuffing the boxes with popcorn to avoid detection, Crowther said.

Another individual is known to load up with alcohol from Iqaluit’s beer and wine store and take it by snowmobile to the nearby community of Kimmirut, about 120 kilometres overland from Iqaluit.

Crowther told a municipal official from Kimmirut that the RCMP planned to apprehend that bootlegger.

On a positive note, the Government of Nunavut budget for 2019–20 includes $2.8 million for police communication services. This will allow the RCMP to hire four new translators to work with dispatchers at the RCMP communication centre.

Because the RCMP is under contract with the Government of Nunavut, Crowther urged the mayors to lobby their MLAs to support the call for more resources for the RCMP in the territory.