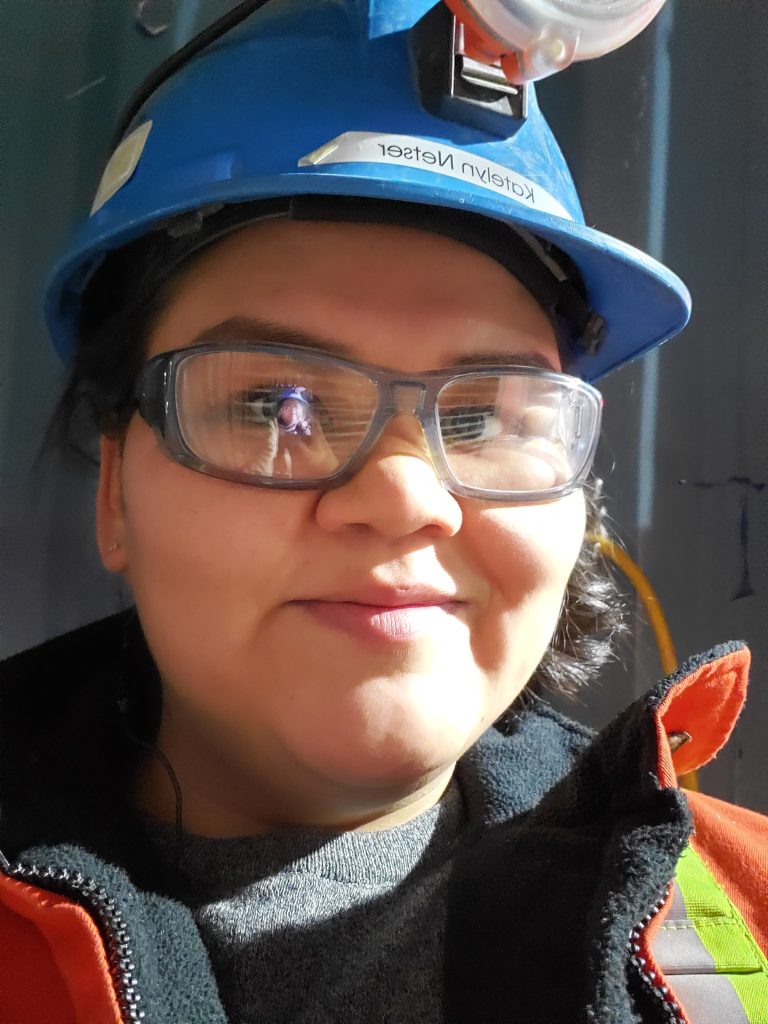 Underground haul-truck driver Katelyn Netser will don her hard hat again when she heads back to Agnico Eagle Mines Ltd.’s Meliadine gold mine at the end of this month. (Photo courtesy of Katelyn Netser)

Nunavut resident moves south to return to mine job back home

Underground haul-truck driver Katelyn Netser has her eye on Sept. 28: that’s when she returns to work again at Agnico Eagle Mines Ltd.’s Meliadine gold mine in Nunavut.

It will be her first two-week rotation at work since mid-March, when all Nunavut-based employees at Agnico Eagle’s two gold mines were sent home due to concerns about COVID-19.

Netser will be able to go back to work at Meliadine because she is no longer based in Nunavut.

“I am excited,” she told Nunatsiaq News. “I miss my colleagues and co-workers.”

Now, eager to get back to work, Netser decided to move last month to Winnipeg, which has a population of about 600 Inuit.

Netser, 29, who is originally from Coral Harbour, also said she moved south to get good housing.

When she worked at Meliadine previously, she said she lived in nearly every community throughout Nunavut due to the lack of adequate housing in the territory.

Netser said she would work for a two-week rotation at Meliadine and then fly to a community where family and friends had room for her, “so I could have my own space.”

The move to Winnipeg resolved the issue of being able to work and having a place of her own.

“There are a lot of Nunavummiut who want to move down south so they can go to work at the mine,” Netser said.

While it’s not clear just how many of the mining company’s employees are based in the south, Agnico Eagle said three have moved south since the start of the pandemic.

Agnico Eagle reduced its activities at the mines on March 23, when the company sent its 400 to 500 Nunavut employees home as a COVID-19 preventive measure.

Since then, Agnico Eagle has spent $1.4 million per month to support its Nunavut-based workforce, paying them 75 per cent of their salaries.

But the company’s goal is to get everyone back on the job, said Melissa Bradley, Agnico Eagle’s community relations and communications superintendent.

“We understand the financial impact, the social impact and even the social and personal impact that it has on our Nunavut employees to be at home since March,” she said.

“But all of our employees are still employed by us and we have renewed the 75 per cent pay.”

As well, an Agnico Eagle–sponsored “good deed brigade” in Kivalliq communities has also allowed workers to volunteer for local organizations and receive 100 per cent of their pay, she said.

Employees have always been allowed to change base, or home location, Bradley said.

“We try to accommodate that, but in terms of COVID, the goal is definitely to have people back to work from their communities,” she said.

To that end, Agnico Eagle is looking at “many ways and proposals” to get people back on the job as soon as possible.

“But we want to make sure that the government and the communities feel safe,” Bradley said.

Right now, southern workers are tested before they board aircraft to head north. On arrival at the mine sites, they self-isolate until their test results come in, usually a few hours later.

There have been no positive cases, she said.