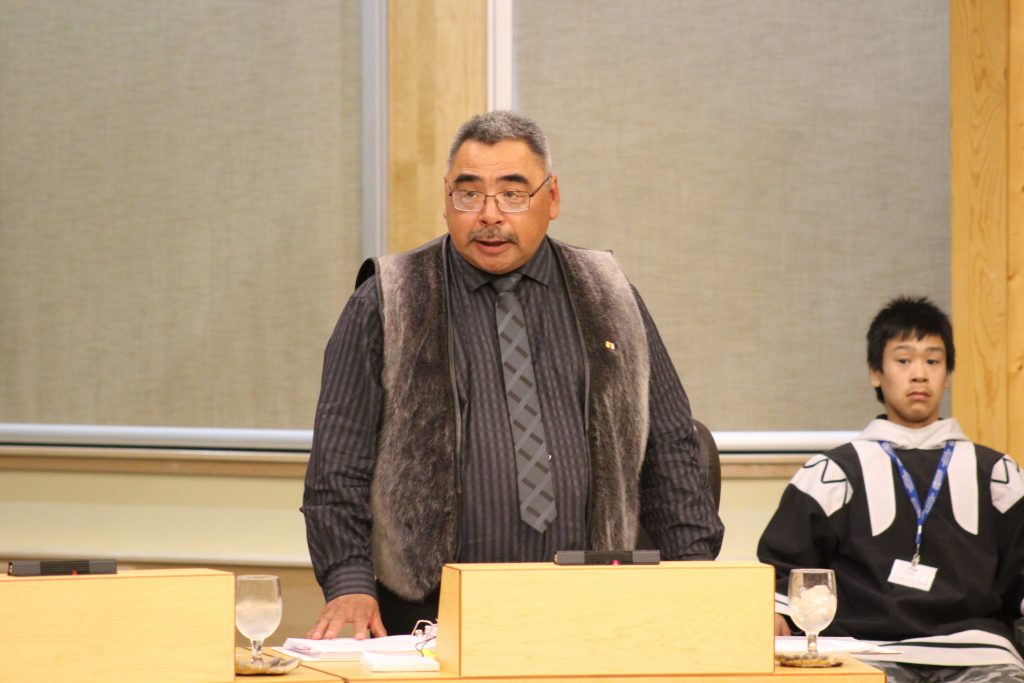 David Akeeagok, Nunavut’s acting minister of justice, acknowledged on June 3 that a report on the territory’s Family Abuse Intervention Act “highlighted some of the gaps” that exist between the law’s aspirations and the reality on the ground. (Photo by John Thompson)

When Nunavut’s legislators passed the Family Abuse Intervention Act in 2006, they envisioned the new law would tackle spousal abuse in a way that was more in tune with Inuit culture, and recognized that the territory’s couples in abusive relationships would often remain together.

The law created one key tool called a community intervention order, which requires a couple in an abusive relationship to seek counselling.

It was supposed to be used more frequently than the emergency protection orders, which are essentially restraining orders.

But, according to a report tabled during the recent sitting of Nunavut’s legislature, over the past year community intervention orders have not been used once.

That’s worrying to John Main, MLA for Arviat North-Whale Cove, who recently raised the matter in the legislature.

“Based on my rudimentary understanding, and I may be incorrect here … but it appears that we in this territory are not intervening early enough when it comes to cases of abuse,” Main said on June 3.

As well, a working group that helps oversee the implementation of the law has been “dormant” due to “the migration of staff, partners and stakeholders,” the report states.

Main asked when the government expects this working group to be reinstated.

Akeeagok acknowledged that the report “highlighted some of the gaps” that exist between the law’s aspirations and the reality on the ground.

“I can assure you that the department is taking steps to try to reduce some of this and including in terms of figuring out how to implement … the Family Abuse Intervention Act,” he said.

The report offers several reasons for community intervention orders not being used.

Sometimes, community justice outreach workers “do not receive referrals for families experiencing family abuse until it has become a crisis situation and emergency intervention is required,” the report states.

Other times, the spouse accused of being abusive declines to participate.

Or both spouses may agree to receive counselling, and then decide there’s no need to follow up with the hearing required for a community intervention order.

To increase the use of community intervention orders, Nunavut’s community justice division “has continued to collaborate with and provide training to RCMP, Family Services and health centre staff in order to identify families who may benefit” from these orders, the report states.

These workers also speak to those with emergency protection orders nearing an end, to give them the option of transitioning to a community intervention order, “in order to better support families that wish to maintain their relationships going forward,” the report said.

It’s too soon to say, said Akeeagok. But, now that the working group has been reinstated, “the funds and the operational needs will be identified,” he said. “So I am expecting that to be submitted soon.”