“Ever since I was a kid, I’ve always wanted to be a nurse or a doctor” 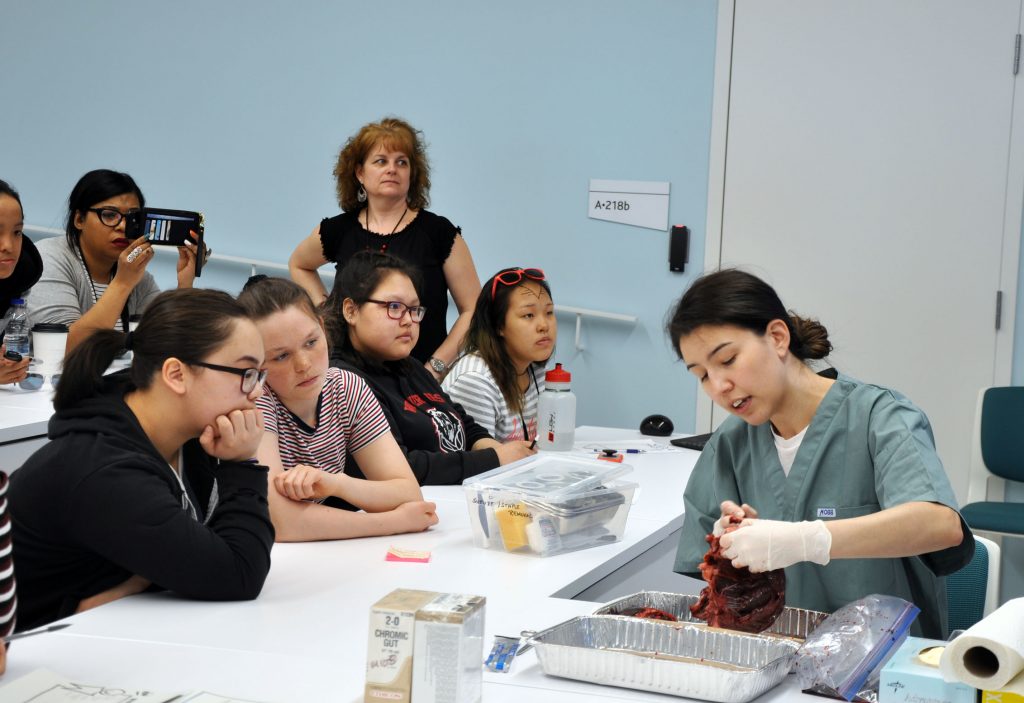 Dr. Donna May Kimmaliardjuk dissects a caribou heart for Nunavut secondary students as part of a health careers camp in Iqaluit on Friday, May 10. (Photo by Sarah Rogers)

Donna May Kimmaliardjuk pulls a caribou heart from a packaged box and holds it up to a chorus of “oohs” and “aahs.”

This isn’t for dinner, though; the cardiac surgery resident grabs her scalpel and gets to work.

Dr. Kimmaliardjuk is in Iqaluit for just 24 hours to show a group of Inuit youth what she does and what it takes to pursue a career in health, as part of the second annual Health Careers Camp hosted at Nunavut Arctic College.

The caribou heart isn’t a foreign thing to the few dozen Nunavummiut students gathered around to watch as Kimmaliardjuk dissects the organ.

But they’ve never seen it broken down by all its intricate parts, as Kimmaliardjuk picks apart the left and right ventricles, valves and arteries.

“Bypass is my favourite surgery,” says Kimmaliardjuk, who is doing a residency at the University of Ottawa Heart Institute.

She points out where plaque can form along arteries and create blockages—prompting the need for open-heart surgery.

“The biggest risk for this is smoking,” she warns the students. “I really hope you don’t ever smoke so you don’t have to come and see me.”

On her way to becoming Canada’s first Inuk cardiac surgeon, Kimmaliardjuk is a natural inspiration to this group of secondary students, who came from eight different Nunavut communities to take part in the week-long camp from May 6 to May 11.

Throughout the week, the roughly two dozen students have learned about different types of health careers and what courses they need to pursue them.

The group also got to learn some hands-on skills, like putting on a cast, conducting a hearing test and suturing.

Baker Lake student Carla-Rose Kaayak said she learned how to perform CPR for the first time and practised it by reviving a mannequin baby.

“It was really cool,” said the 18-year-old, who is just finishing her last year at Jonah Amitnaaq high school.

Kaayak is keeping her options open; she’s applied to an engineering program at the University of Manitoba and a heavy equipment operating program at Red Deer College in Alberta, and she also plans to apply to the nursing program at Nunavut Arctic College.

Kayaak said she is drawn to nursing in particular, knowing the health centre in her home community of Baker Lake has struggled with nursing shortages and does not currently have an Inuk nurse on staff.

That’s an issue Nunavut-wide, where Inuit are under-represented in the territory’s health care system.

The health career workshop made a career in nursing feel “less intimidating,” Kaayak said. She jotted down notes and quotes from Dr. Kimmaliardjuk’s presentation for inspiration.

For her part, Kimmaliardjuk tried to impress on students that a career in medicine requires hard work, but that it pays off.

Kimmaliardjuk explained the pathway to getting there, from a degree, to medical school and then onto a residency, which she is close to completing.

“You have a life and you’re getting paid,” she said. “It’s just very, very busy.”

The Health Careers Camp is based on a similar program offered by the Northern Ontario School of Medicine, and funded through  Employment and Social Development Canada’s Skills Link program, with support from Nunavut Arctic College, Nunavut Tunngavik Inc., the Makigiaqta Inuit training program, and the Government of Nunavut’s departments of Education and Health.