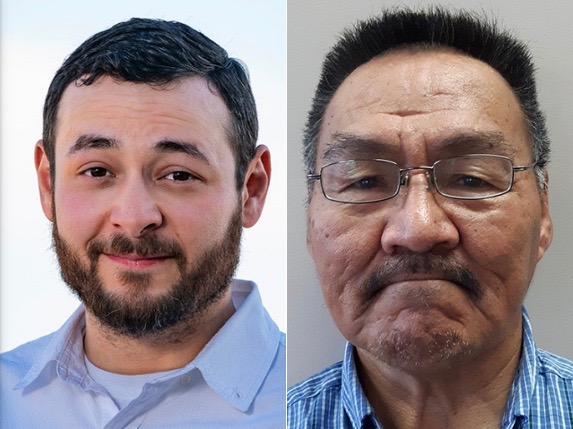 Adam Lightstone (left), and Joanasie Akumalik are running to represent Iqaluit-Manirajak in the next Nunavut legislature. (Photos courtesy of Elections Nunavut)

Voters in the Iqaluit-Manirajak riding will have two names on their ballots next week — incumbent MLA Adam Arreak Lightstone and a long-time Iqaluit city councillor, Joanasie Akumalik.

Lightstone was one of the youngest to be elected to Nunavut’s legislative assembly when he became MLA at 30 years old in 2017, alongside David Joanasie, who was elected at the same age that year.

Akumalik, on the other hand, does not have experience in the legislative assembly, but has worked within different governments and Inuit organizations longer than Nunavut has been a territory.

Lightstone was born in Rankin Inlet and has spent most of his life in Iqaluit.

He has completed a four-year term as the MLA representing Iqaluit-Manirajak and said now, he wants to continue the work he’s started.

On top of raising issues within the legislative assembly, Lightstone made a habit of attending meetings of city council, the district education authority and other organizations. He is also often seen at community events.

“That allows me to keep myself informed [and] to get out and speak to individuals directly,” Lightstone said.

In the last four years, Lightstone said he has been very vocal about many issues in the assembly, including child abuse and domestic violence.

“These are issues that are impacting every community across the territory and I believe we can no longer allow ourselves to be silenced or sweep these issues under the rug.”

Lightstone said no longer being a rookie MLA if re-elected would be a big advantage.

“There’s a considerable learning curve attached to [the job], he said. “I believe being a veteran member has substantial benefits.”

Akumalik grew up in Arctic Bay and moved to Iqaluit in the early ’80s.

He worked as an interpreter and translator for the Northwest Territories government before Nunavut became a territory and has been involved with land claims organizations for most of his life, he said.

In Iqaluit, he has worked as a city councillor for 14 years and is also a project manager for Nunavut Tunngavik Inc., where his job is to locate graves of Inuit who died of tuberculosis in southern Canada.

Akumalik said he decided to run for the position of MLA because he felt the community and territory could use better representation in the assembly.

“I’m a good communicator, I speak both English and Inuktitut, and I’m a good listener,” he said.

He also wants to focus on getting funding to improve the causeway, and the cemetery in Iqaluit, which is prone to flooding, he said.

Another area on his to-do list is revisiting acts that didn’t pass in the last assembly, like a proposed liquor tax act, he said.

Akumalik said he has spent time consulting with different communities in Iqaluit, including Muslim, Black, Filipino and French residents — in addition to Inuit — to understand their cultural values.

“I want to make sure these values are also heard when making important decisions,” he said.

The territorial election will take place on Oct. 25.