Nunavut case count down to 215; no more confirmed cases in Baker Lake 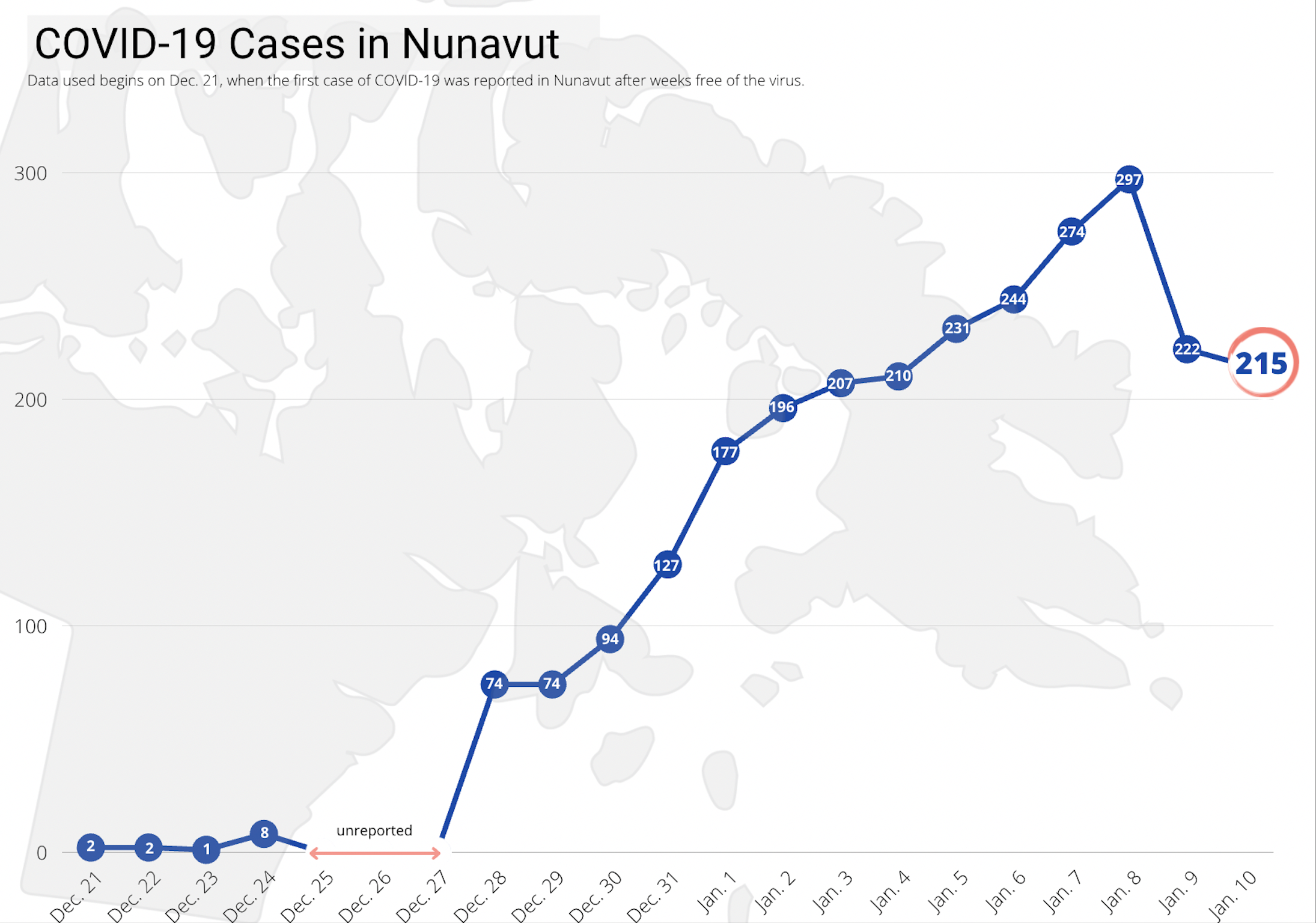 There were a total of 215 active cases of COVID-19 in Nunavut on Monday, without counting presumptive cases of the virus. (Graphic by Mélanie Ritchot)

Nunavut’s tally of confirmed COVID-19 cases went down for the second day in a row on Monday, but it’s hard to say whether fewer people actually have the disease, or if this is a result of less testing.

There are now 215 active cases across 14 communities in Nunavut and a total of 138 recovered cases, according to a Twitter post by Premier P.J. Akeeagok on Monday.

The recovered case tally includes 81 recoveries announced on Sunday, which brought the first drop in cases since the latest surge in COVID-19 cases began.

But it is impossible to gauge whether cases are actually going down in the territory now that tests are being rationed.

Now, PCR tests will be used to confirm the presence of COVID-19 in a new community, in high-risk settings like elders homes and for critical workers.

Rapid tests are being used to identify the spread of COVID-19 from house to house, but if someone living in a house with someone who has the virus develops symptoms, it will be assumed they also have COVID-19.

This means recoveries will likely be added to the case count in chunks instead of one by one, when entire households are considered recovered.

Among the 14 communities with confirmed cases, Iqaluit has the highest case count at 62 cases, and Rankin Inlet is second on the list with 43 cases.

After a presumptive case was announced in Whale Cove on Wednesday, the community now has seven confirmed cases.

Sanikiluaq’s formerly presumptive case also appears to be confirmed, with one active case now being reported in the community.

Cambridge Bay’s case count jumped from two to 19 over a matter of days.

New exposure notices were issued over the weekend and on Monday for five flights going to Cambridge Bay, Iqaluit and Sanikiluaq since Dec. 28.

The GN is asking all passengers on these flights to self-monitor for symptoms until specific dates whether they are vaccinated or not.

Akeeagok and Patterson, Nunavut’s chief public health officer, are scheduled to give updates on Tuesday and Thursday at 11 a.m. ET, which can be streamed on the legislative assembly’s website or listened to by radio in Iqaluit at 92.5 FM.

Nunavut schools are currently slated to reopen on Jan. 17 and Education Minister Pamela Gross is expected to speak at Tuesday’s update.

The last territorial government released a school reopening plan in 2021, which includes keeping schools open as a goal and guides for when communities should move to remote learning.