“We’re private, we don’t get a dime, we have to pay out of pocket, and so we’re trying to do what we can where we can” 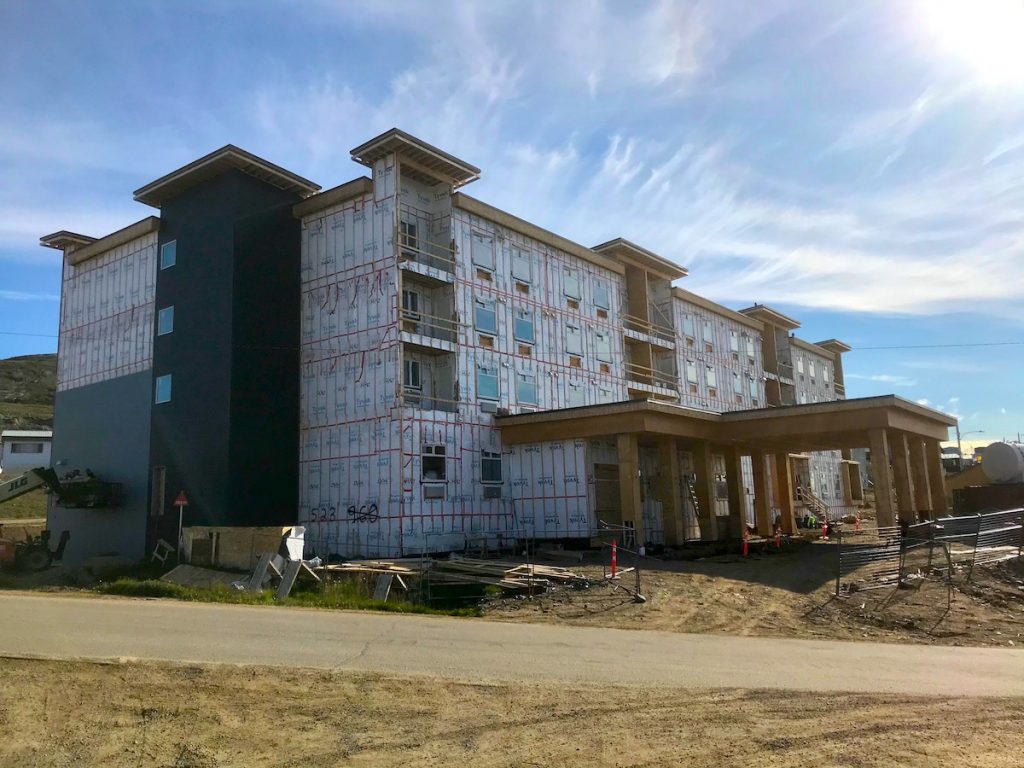 The new hotel now under construction by Jam 2016 Investments Inc. is taking shape. The four-storey, 86-suite hotel, with a restaurant, covers two parcels of land at the intersection of Queen Elizabeth Way and Niaqunngusiariaq Road in Iqaluit. (Photo by Milan Mrdjenovich)

The requirement for non-essential workers to go into isolation before coming to Nunavut has complicated progress on four major construction projects in Iqaluit.

The mandated two-week stays at hubs in Ottawa, Winnipeg, Edmonton and Yellowknife are intended to keep COVID-19 out of the territory, but this makes it harder to recruit construction workers, said developer Milan Mrdjenovich.

“And it’s going to hurt the economy,” said Mrdjenovich, the son of Mike Mrdjenovich, whose Edmonton-based Nova Builders Inc. put up many buildings in and around Iqaluit’s downtown core.

His own company, 5437 Nunavut Ltd., and Jam 2016 Investments Inc., owned by his sisters, are in the middle of several projects: a new hotel, an office building, a staff house and renovations for what will become Iqaluit’s new city hall.

But Mrdjenovich said that most workers from the south are not interested in heading to Iqaluit once they hear they must go into quarantine before coming to Nunavut.

Some workers who do agree to the isolation quit after a day or two, he said.

One worker was told he had to restart his two-week isolation after stepping out to buy a soda pop on day 10. He quit.

“I have never heard a good story yet,” Mrdjenovich said of the quarantine.

The obligation to complete the quarantine is also hard on workers who are already in Iqaluit and would like to go out for a break. They don’t because they can’t stand the idea of the isolation on their return, Mrdjenovich said.

“The guys that are here, some since January, they are starting to get burned out,” he said. “But they don’t want to leave.

“So the isolation is killing the crews. And it’s not just our crews, but everyone else’s crews, too. It’s hard to go into isolation for two weeks because you feel like you’re going to jail, that you’re a criminal. They feel like they are being punished.”

Mrdjenovich, who also spent two weeks at an isolation hub in Yellowknife, said the impact of the two-week period on construction logistics and costs is difficult.

“I know why it’s needed, but there’s no leeway.”

The quarantine also means an increased cost to private companies because, Mrdjenovich said, you must pay your workers while they sit in the isolation hubs.

“Everything’s getting more expensive, and you know what is going to happen: the end user is going to pay more,” Mrdjenovich said.

“We’re trying to work, and it’s just tough. It’s a real strain financially on us.”

On the other hand, the expense of government workers’ quarantines would be covered, he said.

“It’s a bit of a double standard. But what are we going to do? We can’t abandon halfway through,” Mrdjenovich said. “We’re private, we don’t get a dime, we have to pay out of pocket, and so we’re trying to do what we can where we can.”

Mrdjenovich said there are not enough people in Iqaluit willing and able to work in construction because many have tapped into programs like the Canada Emergency Response Benefit.

“We’re short-staffed and working 60 hours a week trying to catch up,” he said. “I understand that there’s a procedure to stop the spread of COVID-19, but on the other hand you look at people flying in because they have special status.”

On site, everyone is diligent and tries to respect social distancing, he said.

Hand sanitizers are plentiful, but most workers don’t wear masks on the job.

“It’s tough to work and have something over your face. It’s hard to breathe, but everyone is aware [of COVID-19 prevention]. It is a challenge,” he said. 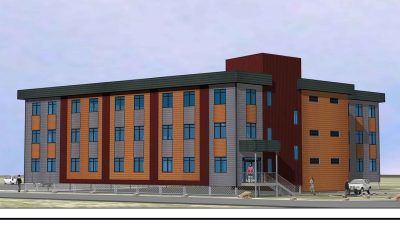 Here is an artist’s rendition of the three-storey, 33,000-square-foot office building now under construction on the site of the former Toonoonik Sahoonik co-op in Iqaluit by Milan Mrdjenovich’s 5437 Nunavut Ltd. (Supplied image)

On Aug. 15, his crew starts work on the new Iqaluit city hall premises: a ground-floor, 9,000-square-foot space in building 1085, around the corner from the site of the now-demolished Navigator Inn.

Work also continues on Jam 2016 Investments’ four-storey, 86-suite hotel, with a restaurant, on two parcels of land at the intersection of Queen Elizabeth Way and Niaqunngusiariaq Road.

That should be open to the public in January, Mrdjenovich said.

As well, Mrdjenovich’s workers are starting to build a 10-bedroom staff house in Joamie Court and complete a three-storey office building on the site of the former Toonoonik Sahoonik co-op, near the beer and wine store.

The 33,000-square-foot office building should also be finished early in the new year.