“Nobody wants to be the bad guy.” 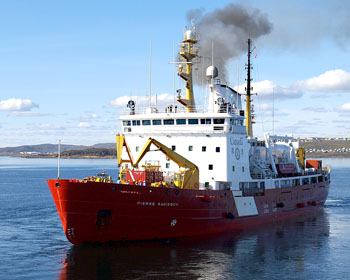 Operation Nanook, the military’s annual exercise in the eastern Arctic, is meant to show Canada’s ability to respond to environmental, security and military threats in the region.

But with 700 personnel, two huge ships and numerous airplanes involved, what is the environmental impact of the operation itself?

The short answer is that it’s hard to tell exactly.

But through interviews and public documents it’s possible to get an idea of Operation Nanook’s enviromental footprint.

While military exercises in general don’t have the best reputation for taking care of the environment, Operation Nanook treads surprisingly lightly on Nunavut’s ecosystem.

That’s because Joint Task Force North, the arm of the Canadian Forces that runs Operation Nanook, is bound by the Arctic Waters Pollution Prevention Act and, according to the Nunavut Impact Review Board’s screening decision for the operation, at least seven other pieces of federal and territorial legislation.

“We don’t operate on land or in the water without the permission of the Government of Nunavut,” said Brig. Gen. David Millar, commander of Joint Task Force North, during a news conference in Iqaluit this past Tuesday.

JTFN got approval from the review board for an amphibious exercise on Brevoort Island, although that part of the exercise was cancelled due to ice conditions.

According to the review board’s decision, JTFN got permission to set up a temporary camp, use an airstrip and dock, use two small diesel generators and store 640 litres each of diesel and naptha.

The Toronto picked up 150 cubic metres of fuel from the Radisson during the exercise.

The refuelling was done in Frobisher Bay while the two ships were moored alongside one another and surrounded by an oil boom, Grant said. The ship also treats its own sewage and uses phosphate free soaps.

“Nothing goes over the other side,” Grant said, adding Canada wouldn’t have much moral weight policing its Arctic waters if its own ships fouled the sea. “Nobody [in the Canadian Forces] wants to be the bad guy.”

That even extends to ammunition. The Toronto doesn’t fire its massive 57-mm deck gun or any other weapons, which include missiles, machine guns and chaff, which is used as a decoy to protect against incoming missiles.

“It’s better to not” fire any of the weapons, he said, in part because “you could go on for days” about the number of chemicals contained in a single artillery shell.

That fuel was all purchased in Iqaluit from Uqsuq Corporation.

Uqsuq’s manager Chris Coté wouldn’t say how much jet fuel his company sold the military. But he said Uqsuq sold about 50 per cent more jet fuel than usual during Operation Nanook.

Gerald Butts, the president and chief executive officer of World Wildlife Fund Canada travelled on the HMCS Toronto during the operation. He said the ship did a good job limiting the pollution it produced.

Butts said he has no criticism of the military for practicing in the Arctic.

But he said the federal government as a whole has to do a better job preparing for environmental threats North of 60.

“If a rust bucket went down in the Beaufort Sea, we wouldn’t be able to get to it,” Butts said in a telephone interview. “We have to figure out how to respond to a major contamination of the Arctic and we are a long way from doing that.”