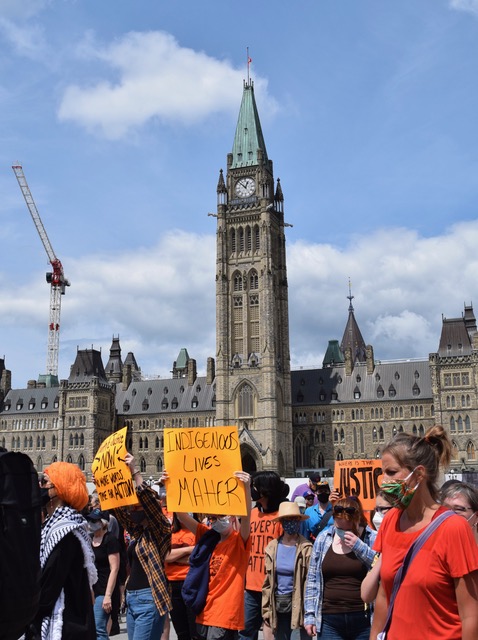 Hundreds of demonstrators, many wearing orange shirts, flocked to Parliament Hill in Ottawa on Saturday for an NDP-led march demanding justice for residential school victims (Photo by Madayln Howitt, special to Nunatsiaq News)

OTTAWA — Hundreds of orange shirts dotted the green lawns of Parliament Hill Saturday as more than 500 demonstrators gathered for the NDP-led March for Truth and Justice. Orange shirts have become a symbol of the fight for justice for victims of Canada’s residential schools, where decades of abuse of Indigenous children occurred at the hands of teachers and clergy.

Organized by Nunavut MP Mumilaaq Qaqqaq and fellow NDP MP Charlie Angus, the march took place on the heels of the MPs’ call earlier in July on the federal government to appoint a special prosecutor to investigate crimes committed against Indigenous people at residential schools.

In the past few months, Canadians have been learning about the abuses of Indigenous children at residential schools as unmarked graves are located at more and more of the former institutions, the last of which closed in 1996. 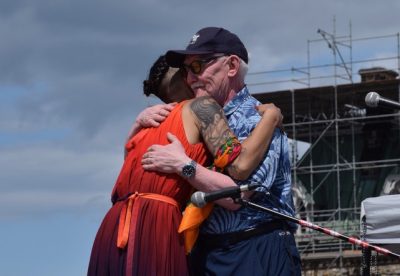 Piita Irniq, a former commissioner of Nunavut, and a victim of residential school abuse (right), embraces Nunavut MP Mumilaaq Qaqqaq after speaking at an NDP-led march in Ottawa on Saturday (Photo by Madalyn Howitt, special to Nunatsiaq News)

“Thank you for caring,” said Qaqqaq to the crowd, visibly overcome with emotion. “The whole point of us being here is for the children.”

Qaqqaq criticized government leaders for not doing enough in the fight for truth and reconciliation. The New Democrat announced in May she would not seek a second term as Nunavut’s MP when the next federal election is called — possibly within weeks.

“The federal institution has done a phenomenal [job] of not sharing the truth with you. I know [though], because you’re all here, that Canadians are coming to more of a realization that there is a lot of injustice and inequality in Canada,” she said.

Indigenous elders led the march from Parliament Hill to the federal Justice Department — a few blocks away in downtown Ottawa — as participants chanted “no justice, no peace” and carried flags and signs demanding accountability.

Sean French, originally from the Kahnawake Mohawk Territory, joined the march and said he feels inspired by young women like Qaqaaq who are leading the fight for Indigenous rights.

“My people are matriarchal, and Indigenous women do the real fighting in the brains and the heart,” he said. “That’s the work that needs to be done. We’ve got to fight with people’s hearts and minds to get them to understand what’s wrong with everything that has been happening.” 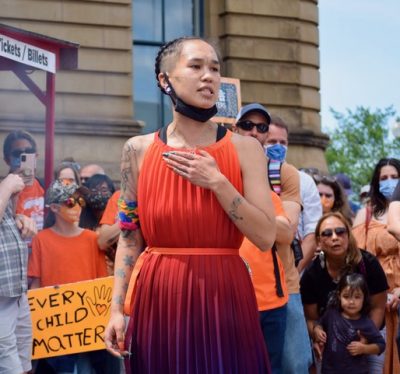 There’s a growing realization among Canadians of the “injustice and inequality in Canada,” says Nunavut MP Mumilaaq Qaqqaq, an organizer of an NDP-lead march on Parliament Hill on Saturday. (Photo by Madalyn Howitt, special to Nunatsiaq News)

Paul Henry from Petawawa, an Ottawa Valley community, participated in honour of his partner, Jennifer Spence, who attended the St. Anne’s residential school in Fort Albany First Nation, in northern Ontario, as a child.

“Either we have justice, or we have genocide in Canada,” he said. “It’s ironic that in front of the Peace Tower we’re recognizing the number of children that have not had justice, and these are the only ones identified,” he added.

In addition to organizers Qaqqaq and Angus, other notable speakers at the event included Aliqa Illauq, who announced this week she will be seeking the NDP nomination in Nunavut, and residential school survivors.

Piita Irniq, a former commissioner of Nunavut, addressed the crowd and spoke of his experiences at Sir Joseph Bernier Federal Day School in Chesterfield Inlet.

As thousands of unmarked graves continue to be discovered at the sites of former residential schools, participants of the march emphasized the need to honour those children who died.

“They were buried, intending for everybody to forget them, but they are not forgotten,” said Sytukie Joamie of Iqaluit. “The truth has come out and will prevail for these children. Once justice is carried out, their spirits will be free again.”