“If it has meaning to you, then that is really good to us” 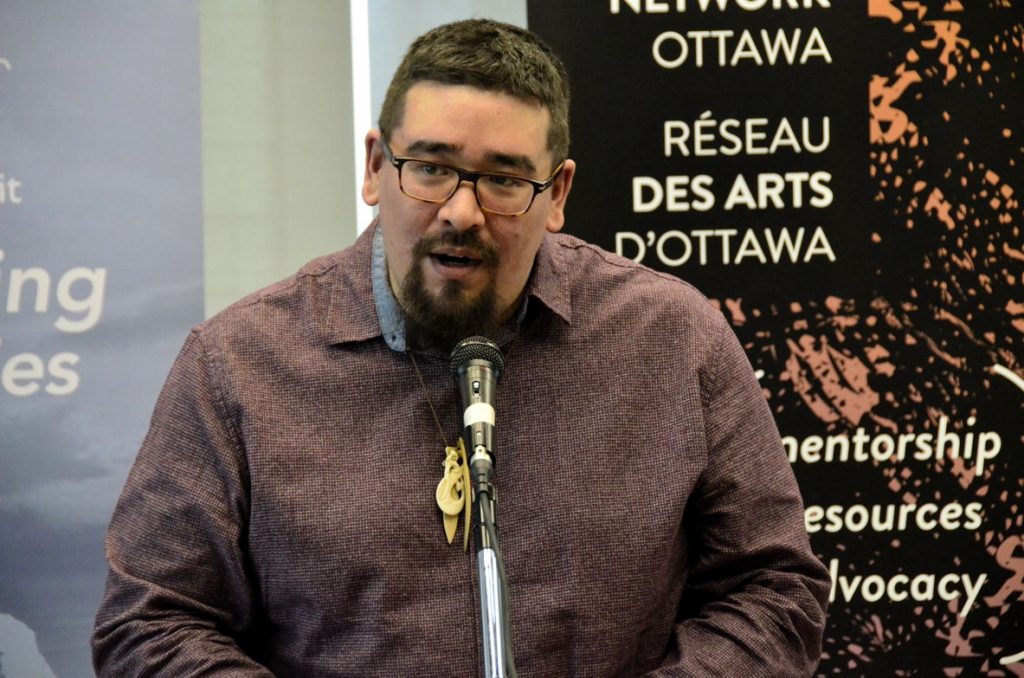 Kaajuk Kablalik is one of three artists who created more than 70 glass panels adorning the “Sivuniksattinu” qajaq, unveiled on Jan. 23 at the Ottawa Hospital’s general campus. (Photo by Jim Bell)

Named “Sivuniksattinu,” or “For Our Future,” it’s about 17 feet long with a weathered wooden frame whose curved sections are fastened with dowelling and rope. 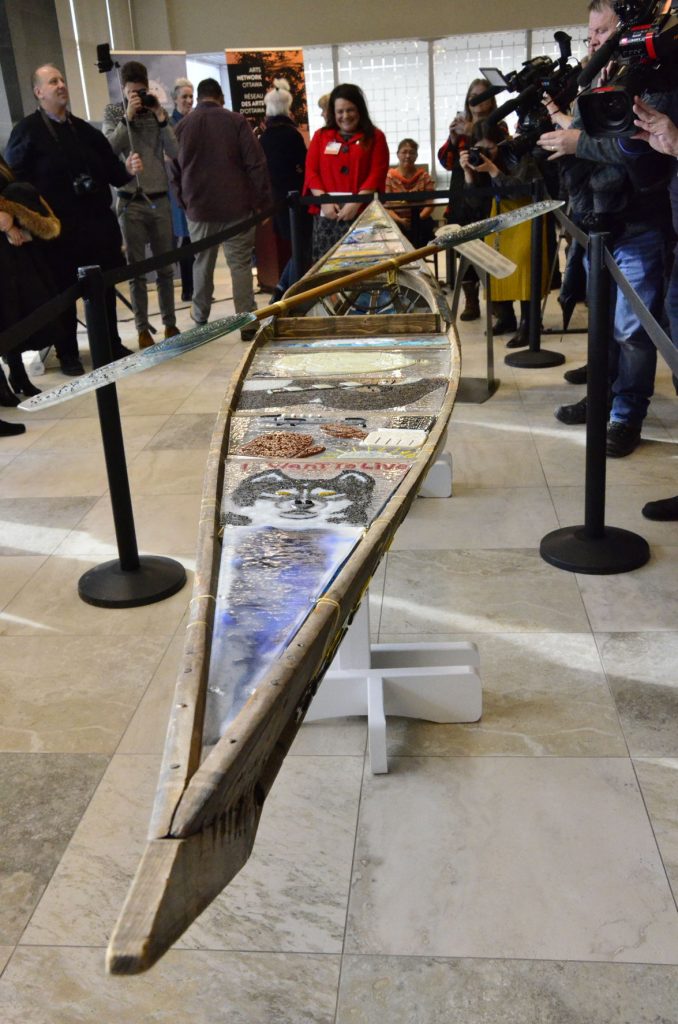 But with its ornate pattern of more than 70 glass panels, this gleaming piece of art, two years in the making, is no ordinary qajaq.

Unveiled at a ceremony held on Thursday, Jan. 23, it’s now on display in the large waiting area off the main entrance to the Ottawa Hospital’s general campus.

At this high-traffic location, it now stands in recognition of the many Inuit patients the hospital serves and as a symbol of reconciliation.

“The art piece is for everyone, even though it’s an Inuit piece, an Inuit symbol and an Inuit tool,” the Ottawa-based artist Kaajuk Kablalik told Nunatsiaq News.

“I like to say it’s for everybody, because it’s in an area that has high traffic from all the various cultures that we see in the hospital. So if it has meaning to you, then that is really good to us.”

Kablalik, who’s also president of Tungasuvvingat Inuit, worked with two other Inuit, Melissa Attagutsiak and Alexander Angnaluak, to create the artwork that adorns the qajaq, along with Jennifer Anne Kelly, the well-known Ottawa-area glass artist.

The complex project, sponsored by TI and by Arts Network Ottawa, took two years, a period in which the artists gained experience in the art of glass fusion using a kiln.

“The undertaking was pretty tremendous. Glass fusion can be quite intricate, so some of the intricacies added to the time frame,” Kablalik said. 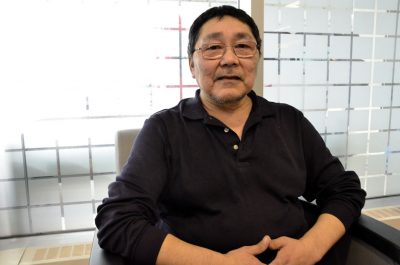 Elder David Erkloo, who moved to Ottawa from Pond Inlet about four and a half years ago, repaired the old qajaq frame that TI provided for the project. (Photo by Jim Bell)

During that process, Kablalik, who makes a full-time living in Ottawa with his art work, added a new artistic medium to his repertoire, which includes sculpting, clay, drawing and his bread-and-butter work: handmade jewelry.

“I’ve grown to love glass fusion. It’s another set to add to my skills,” he said.

At the same time, the unveiling of the piece on Jan. 23, with its intricate representations of Inuit culture, was a big moment for him.

“It was tremendously fulfilling. I felt very accomplished and those two feelings combined, it’s hard to beat, a lot of elation, and I’m happy for anybody who can find meaning from it for themselves, whatever that is.”

David Erkloo, a local elder who moved to Ottawa from Pond Inlet about four and a half years ago, provided guidance to the artists and repaired the old qajaq frame that Tungasuvvingat Inuit had found for use in the project. 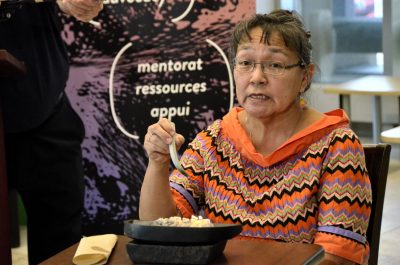 He told Nunatsiaq News that he’s proud to explain the qajaq to non-Inuit.

“This person, he came up and started asking questions about the qajaq. He didn’t know, so I explained how the qajaq was made and what it’s used for and he learned from me,” Erkloo said.

For those who oversee the Ottawa Hospital, the unveiling of the Inuit qajaq is a gesture of reconciliation and a way of recognizing the role the institution plays in the lives of Nunavut Inuit and Inuit who live in Ottawa.

Marion Crowe, who in 2017 became the first Indigenous person to be appointed to the Ottawa Hospital board of governors, said about 1,900 Inuit patients passed through the hospital last year. 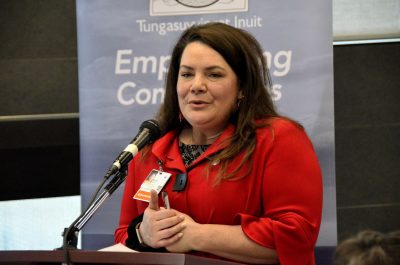 Marion Crowe, who in 2017 became the first Indigenous person to be appointed to the Ottawa Hospital board of governors: “To see the unveiling of public recognition is so heartfelt.” (Photo by Jim Bell)

Crowe, a member of the Piapot First Nation in Saskatchewan, also serves as chief executive officer of the First Nations Health Managers Association.

“To see the unveiling of public recognition is so heartfelt. And while I appreciate that I am First Nations, I appreciate that having Indigenous culture represented in a home away from home is a step forward in our journey of reconciliation,” Crowe said.

Katherine Cotton, chair of the Ottawa Hospital board, said that in its service to Indigenous people, the institution is guided by the recommendations of the Truth and Reconciliation Commission.

“This means being able to come to a hospital where all feel welcomed and all are welcomed.

“I am proud to say that our hospital is here to serve the Inuit community,” Cotton said.