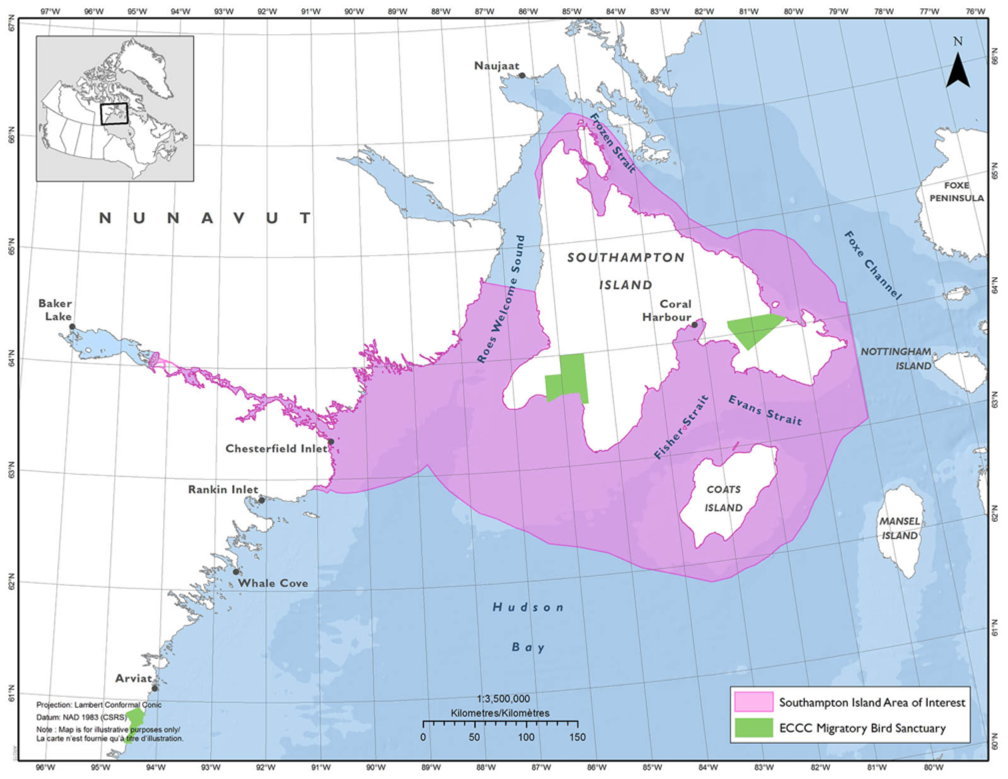 This map shows the “area of interest” that the federal government has designated for the possible creation of a marine protected area around Southampton Island. (DFO map)

The federal government has taken the first step toward creating a marine protected area in the waters surrounding Nunavut’s Southampton Island by designating them as an “area of interest.”

Jonathan Wilkinson, the minister of Fisheries and Oceans and the Canadian Coast Guard, made the announcement on Monday, Aug. 26.

In it, the federal government designates more than 93,000 square kilometres of marine territory that includes Chesterfield Inlet and near-shore waters around Southampton Island, where the small community of Coral Harbour is located.

Those waters include migration routes for marine mammals such as narwhals, belugas and bowheads, and is adjacent to walrus haul-out sites, polar bear habitat and seabird colonies.

“Working in partnership with the Kivalliq Inuit Association, Fisheries and Oceans Canada identified the area as a priority for protection through community consultations, a peer-reviewed science advisory process and Indigenous knowledge,” the news release said.

This marks the start of a process, which, over time, will lead to the creation of a marine protected area under the Oceans Act.

To get there, the federal government still has a lot of work to do.

The unresolved issues include:

• What activities are allowed in the marine protected area

• What activities are prohibited in the marine protected area.

During the 1960s and early 1970s, the area of Hudson Bay to the south of Southampton Island attracted limited and sporadic oil and gas exploration activity.

A report by Natural Resources Canada shows only five offshore wells were drilled in the area, with no significant discoveries.

“Our government is working with the Kivalliq Inuit Association, northern governments, and stakeholders in the north to continue to make progress in protecting more of the Arctic Ocean through the identification of this new area of interest,” Wilkinson said in the news release.