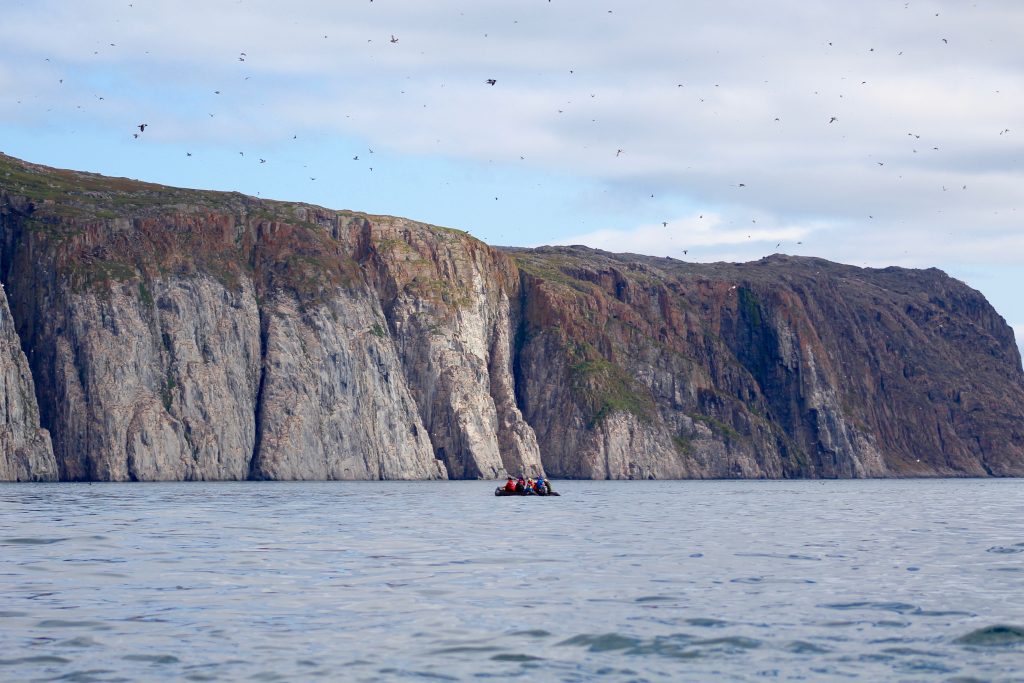 Passengers on a One Ocean expedition cruise in zodiacs near Digges Island, on the north-western tip of the Ungava Peninsula. (Photo by Emma Tranter)

From April to Sept. 2018, over 51,000 people visited Nunavut from outside the territory.

That’s according to Nunavut’s annual tourism report for 2018-2019 from the Department of Economic Development and Transportation, tabled in the legislative assembly earlier this month.

By comparison, there were an estimated 16,750 non-resident visitors to the territory from May to Oct. 2015, according to that year’s Nunavut visitor exit survey.

The Qikiqtaaluk and Kivalliq regions received the most visitors in Nunavut from July to Sept. 2018. The Qikiqtaaluk region had 95,600 visits, with just over half (53.2 per cent) of those visits to Iqaluit with a total of $75.1 million spent. Pond Inlet and Pangnirtung were the second and third most visited communities in the region.

In the Kivalliq, Rankin Inlet had 33,600 visits and $68 million in spending, followed by Baker Lake and Arviat.

Cambridge Bay was the dominant community visited in the Kitikmeot.

Also in 2018, 3,404 cruise tourists visited Nunavut over a two and a half month period. Cruise operators spent $388,351 to access community services, according to the report.

But weather and ice conditions affected half of the cruise visits planned for the territory that year.

The department received data from eight cruise operators on 23 voyages that stopped in Nunavut from July to Sept. 2018. Those cruise ships carried a total of 3,404 passengers.

Just over half, or 59 per cent, of the passengers in the sample who disembarked in Nunavut visited Pond Inlet. Iqaluit was the second-most visited community for cruise ships with 8.3 per cent, followed by Qikiqtarjuaq with 6.1 per cent and Grise Fiord with 5.9 per cent.

Cambridge Bay, Gjoa Haven, Kimmirut and Kugluktuk did not receive any cruise ship visits in 2018. According to the report, both Cambridge Bay and Gjoa Haven were expecting seven visits, which were all cancelled due to weather. 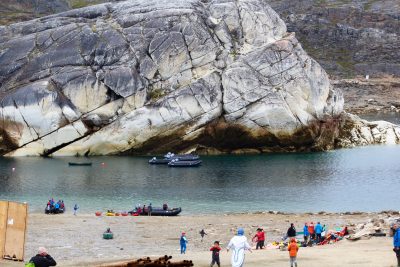 Passengers on a One Ocean expedition arrive in Kimmirut by zodiac in Aug. 2019. (Photo by Emma Tranter)

The report notes that Cambridge Bay and Gjoa Haven were negatively impacted by these cancelled visits, which represents a collective loss of about $25,300.

Most of the information included in the report comes from the department’s visitor exit survey from 2018, which surveyed cruise ship operators and other visitors to the territory last year.

In 2018, the GN responded to community concerns from Pond Inlet and Clyde River about cruise ships going into traditional harvesting areas. According to the report, the GN communicated with the Association of Arctic Expedition Cruise Operators and all cruise ship operators complied by avoiding these areas.

It also notes that although tourism is driven by private sector development, it requires government support to flourish. In Nunavut’s case, this means training and hiring Nunavummiut to work in tourism.

“Prominent among these challenges is the absence of a suitable labour pool that is interested and trained in different elements of the tourism sector. Without a pool of trained, certified employees, opportunities in the tourism industry remain unrealized potential. Training has long been a recognized need for the tourism sector in Nunavut,” the report states.

Nalunaiqsijiit, the Government of Nunavut’s Inuit Cruise Training Initiative, trains 12 Inuit per year to work on board cruise ships as expedition team members, the report states.

According to the report, all of the GN’s current tourism surveyors are Inuit.

“Historically, tourism data collection in the territory has been weak, leading to uncertainty regarding the true size of the industry and its contributions to Nunavut’s economy,” the report states.

A few of the highlighted projects include: