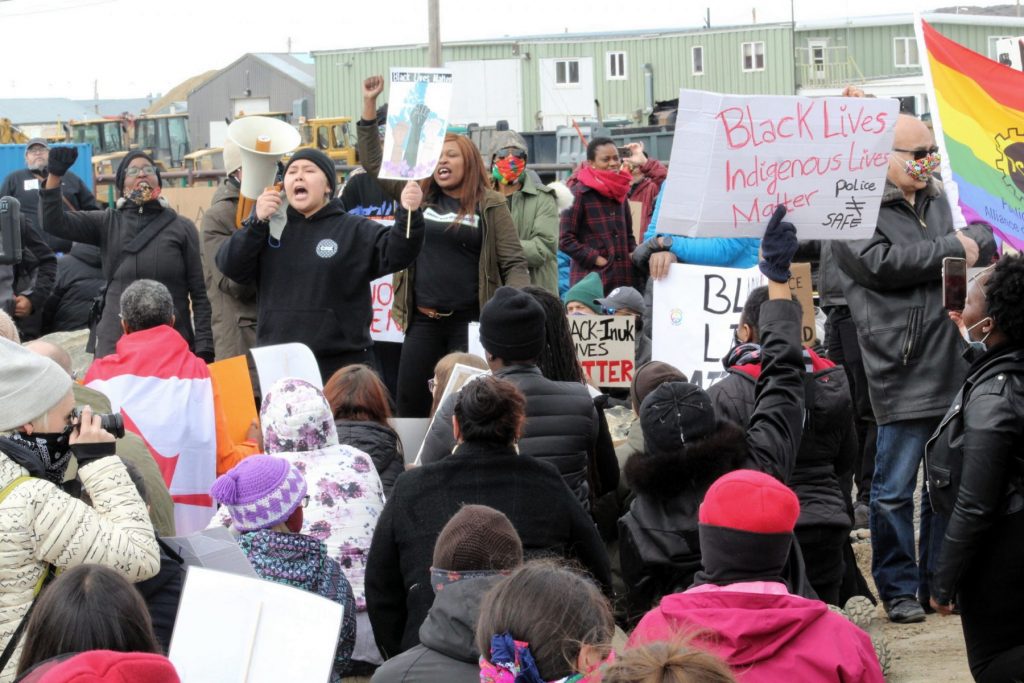 Marchers gather in front of the Nunavut RCMP headquarters building in Iqaluit to call for solidarity between all peoples in Nunavut and to end racism and police brutality. (Photo by Meagan Deuling)

The African and Caribbean Association of Nunavut says “inflammatory” comments made by Nunavut cabinet minister Patterk Netser and Iqaluit city councillor Malaiya Lucassie on Facebook last week are “both racist against Black people and sexist against Black women.”

“ACAN does not condone any behaviour which aims to divide Nunavummiut, including through racism or sexism,” says the group’s statement, which was released on Friday afternoon.

They also praised Iqaluit Mayor Kenny Bell for making a statement that said the Iqaluit municipal government is committed to diversity “regardless of the social constructs of race, ethnicity, gender, and sexual orientation.”

To that end, the African-Caribbean association urged Nunavut residents to stand together.

“In such sensitive times of racial tension, we must strive to remain sensitive to each other’s plights, and to stand in solidarity against all forms of injustices. We urge Nunavummiut to recognize our common battles and stand in unity to address these together,” the statement said.

A firestorm erupted last week after Netser made a Facebook post that suggested Black women who choose to end their pregnancies are a threat to Black lives. Premier Joe Savikataaq immediately removed both of Netser’s cabinet portfolios.

“I had the exact same thought this morning,” Lucassie wrote.

The African-Caribbean association said they recognize “Canada’s position” on a woman’s right to choose an abortion, and pointed out that, on average, over one hundred thousand abortions are performed each year.

“These numbers represent women of diverse race and ages. It is unfair to demean Black women on a sensitive topic that women of all races experience,” the association said.

The group also said that it urges all Nunavummiut to protect and respect women.

“ACAN will continue to unite with Nunavummiut in their efforts to address social injustices to Nunavummiut of all races, ethnicity, gender, socioeconomic status, and sexual orientation,” their statement said.

“He has shown himself as a leader that really understands that injustice anywhere is a threat to justice everywhere,” they said in a statement posted on Facebook.

The society followed that up with a formal statement on Friday that expressed solidarity with Inuit and other Indigenous peoples.

“Indigenous peoples have had their sovereign lands invaded and people of African descent were taken away captive to work these lands,” said the statement, signed by Stephanie Bernard, the president of the Nunavut Black History Society.

Bernard’s statement said people of African descent living in Nunavut “appreciate the love, solidarity and kindness of our Inuit landholders.”

And they said they offer Savikataaq their continuing support.

“We stand in solidarity and will endeavour to do our small part to facilitate any and all changes needed to create and sustain a more respectful, inclusive and just society for all.”

The society has also posted an online petition calling on the Government of Nunavut to implement a long list of “urgent actions” to create racial justice in Nunavut.