‘The implementation of this plan is critical in ending gender-based violence,’ says president Rebecca Kudloo 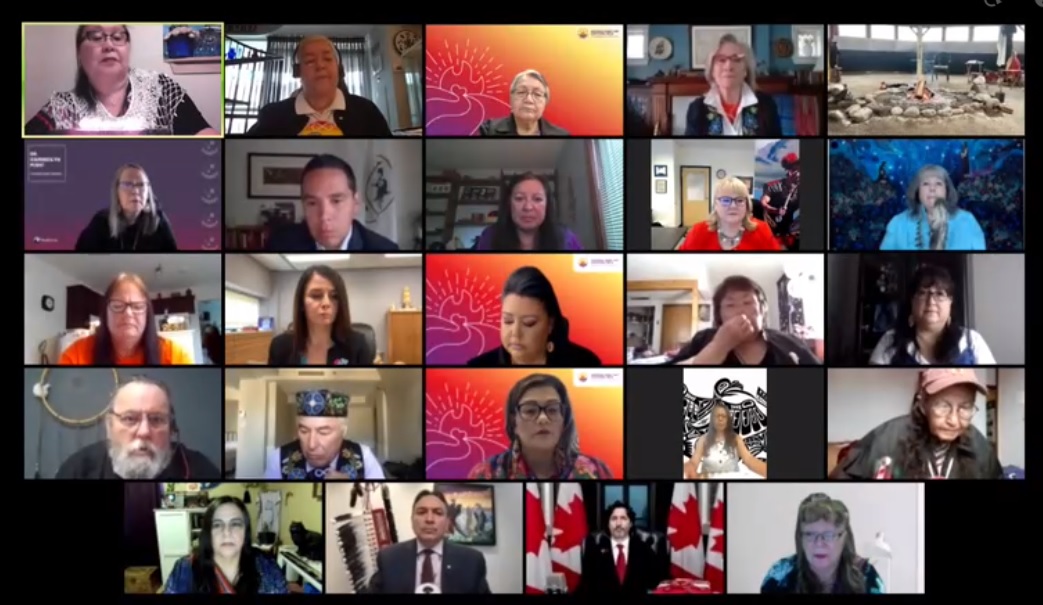 The federal government and Indigenous groups took part in a televised news conference Thursday for the release of a sweeping plan to address racism and violence faced by Indigenous women and girls across Canada. (Image courtesy of CIRNAC)

Pauktuutit Inuit Women of Canada is welcoming the federal government’s national action plan to address racism and violence faced by Indigenous women in girls across Canada.

“I’m happy with it,” said Rebecca Kudloo, president of the national Inuit women’s organization. “Because our Inuit working group worked really hard to bring out what’s needed in terms of action for our Inuit communities.”

The federal government, in collaboration with a national working group of Indigenous leaders, released the sweeping plan on Thursday.

It lays out short- and long-term priorities to end violence against Indigenous women, including public education campaigns, mental health services and trauma-informed training for those who provide them, the creation of safe shelters and sustainable housing as well as oversight bodies to represent survivors and their families.

The national plan comes in response to the 231 calls for justice laid out in the final report of the National Inquiry into Missing and Murdered Indigenous Women and Girls, released in 2019, that concluded that staggering rates of violence against Indigenous women and girls in Canada amount to a form of genocide.

Thursday’s plan comes on the second anniversary of the report’s release.

“We accepted their findings, including that what happened amounts to genocide,” Prime Minister Justin Trudeau said during a news conference Thursday morning.

“It contains truths that Canada is no longer trying to hide.”

The prime minister pledged to turn those calls into concrete, Indigenous-led action, with Ottawa’s $2.2 billion in financial support — funding announced in the 2021 budget.

The government released the report in collaboration with the National Action Plan Core Working Group, made up of Indigenous leadership from across the country.

The document also set out plans to establish a national task force to re-investigate unresolved files, in addition to a justice reform committee whose role it would be to review legislation.

The plan also seeks to improve research and data collection specific to the issue of missing and murdered Indigenous women as well as the creation of a deputy commissioner to oversee Indigenous corrections.

But the action plan doesn’t list whose responsibility it would be to implement, nor does it assign a dollar value to each initiative.

The report does however commit the government to track its progress starting in 2022.

Pauktuutit and Inuit Tapiriit Kanatami, like other Indigenous groups, released their own report Thursday in response to the inquiry’s calls to justice.

The Inuit-specific plan calls for:

For each item, Pauktuutit’s plan lays out responsibilities for provincial or territorial governments as well as how they can collaborate with Inuit land claim organizations on implementation.

“All those priority areas have been something we’ve been working on for quite a while and we’ll keep bringing it up,” Kudloo said. “We’re going to keep fighting for those things.”

“Violence against Inuit women and girls is not going to stop until we start to have healing; not only with women, but with men too,” she added.

“The implementation of this plan is critical in ending gender-based violence.”

Thursday’s event was marked by the recent discovery of a mass grave of Indigenous children — students at a former residential school in Kamloops, B.C.

The intergenerational trauma and loss of culture that flowed from the legacy of residential schools was acknowledged Thursday as a major risk factor for Indigenous women.

“This week has been particularly heavy, as we’ve been forced to acknowledge the ongoing genocide of Indigenous people in this country,” said ITK president Natan Obed, who spoke at Thursday’s news conference.

“The systemic inequities that perpetuate the harm and violence against Indigenous women and all Indigenous peoples must end. We need not wait for another milestone to mark our progress.”