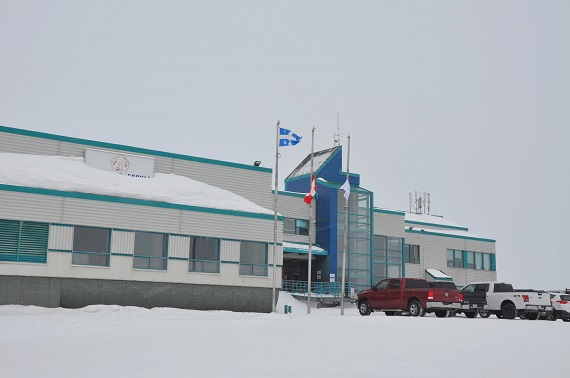 The Kuujjuaq Forum, pictured here in this 2018 file photo, is the new community polling station for the Oct. 3 Quebec election. (File photo by Sarah Rogers)

Registered voters in Kuujjuaq will be able to mark their ballots in Monday’s provincial election, despite confusion around voter cards and where people can go to vote, according to Elections Quebec.

On Thursday, spokesperson Julie St-Arnaud Drolet said approximately 1,800 people in Kuujjuaq, (population 2,754 according to the 2016 census), did not receive voter cards in the mail due to a system error at the post office. Voter cards are personalized information cards that tell recipients they are registered to vote, when and where to vote, and how to vote.

“All local mail is affected by the situation, not only our reminder cards,” St-Arnaud Drolet said in an interview conducted in English and French.

Kuujjuaq is the only Nunavik community affected by the issue.

To add to the confusion, polling was moved last minute from the town hall to the Kuujjuaq Forum recreation centre at 1610 Akianut St. Nunatsiaq News was unable to confirm why this happened.

“This situation is out of our control and we did a couple of things to inform the electors of this change,” St-Arnaud Drolet said.

To reach as many people as possible, Elections Quebec contacted community radio stations and posted on the Kuujjuamiut Facebook group information for people who plan to vote Monday.

Voter registration is closed, and Quebec does not provide residents the option to update their information on election day. Elections Quebec requires that voters present a piece of government or photo identification when they arrive to vote.

St-Arnaud Drolet said electors in Kuujjuaq whose information is up to date should be able to vote Monday, adding that only a handful of individuals are likely to be excluded from the voter list for out-of-date information.

She said she hopes the information advising how to vote on Monday is clear for residents and that it doesn’t sway people away from going to the polls.

In the 2018 provincial election, the Ungava riding — which includes all of Nunavik — had the lowest turnout in Quebec, with only 30.89 per cent of voters coming out. Province-wide turnout was 66.45 per cent that year.

“We’re really sorry about this situation … It’s out of our control but, of course, we would have preferred that everything goes as planned,” St-Arnaud Drolet said.

“We’re really doing our best to make sure that every elector in Kuujjuaq votes, and we encourage them to do so.”