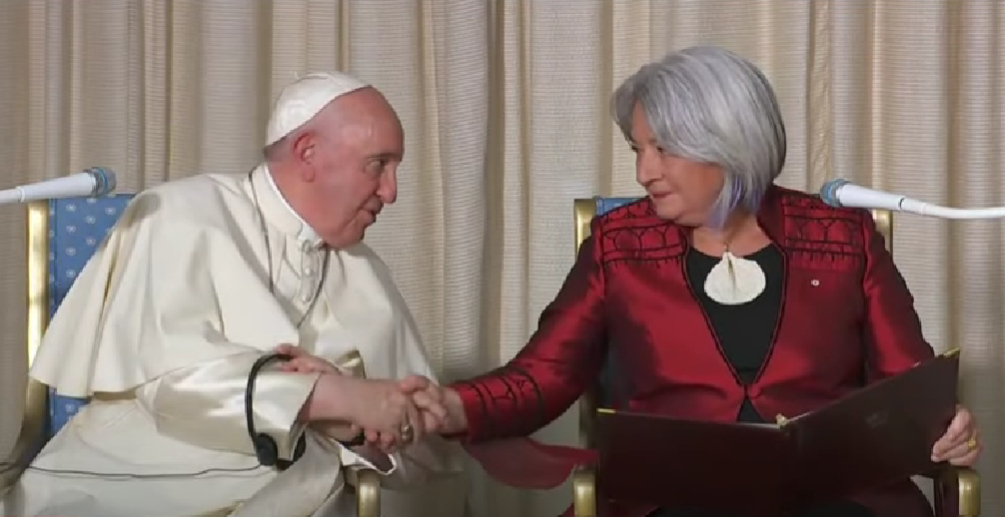 Pope Francis and Gov. Gen. Mary Simon shake hands following Simon’s speech during a ceremony in Quebec City on Wednesday, the fourth day of the Pope’s “pilgrimage of penance.” The pilgrimage is a six-day visit to Canada during which he is apologizing for the role some church members played in Canada’s residential school system. Francis is scheduled to end his visit in Iqaluit on Friday. (Photo courtesy of Vatican News/YouTube)

Pope Francis again acknowledged the harm done to children forced to attend Canada’s residential schools during the second stop of his tour of the country Wednesday.

“I renew my request for forgiveness for the wrong done by so many Christians to the Indigenous Peoples,” Francis said in Spanish during a speech in Quebec City that evening.

The head of the Roman Catholic Church arrived in the provincial capital in the afternoon, following three days in Edmonton. He met with Prime Minister Justin Trudeau and Gov. Gen. Mary Simon at the Citadelle, the Governor General’s official Quebec residence.

On Monday, the first day of what Francis calls his six-day “pilgrimage of penance,” he said he was “deeply sorry” for the abuses some members of the church committed against Indigenous children at Canada’s residential schools.

Canada’s residential school system was a federal government policy between the 1880s and 1990s aimed at separating Indigenous children from their language and culture by removing them from their families and forcing them to attend far-away schools.

“For all of this, I ask for forgiveness,” Francis said Wednesday, calling residential schools “a deplorable system.”

He added he felt “deep shame and sorrow” that “different local Catholic institutions had a part in it.”

However, he noted that, while most of the 139 schools were run by Catholic or Anglican clergy, the system itself was “promoted by the governmental authorities at the time.”

Francis said he and the Roman Catholic Church would respond in a fitting way to the Truth and Reconciliation Commission’s calls to action. Both the Vatican and local Catholic organizations are committed to promoting Indigenous cultures, traditions, customs languages and educational practices in the spirit of the United Nations Declaration on the Rights of Indigenous Peoples.

“It is our desire to renew the relationship between the church and Indigenous Peoples,” the 85-year-old spiritual leader of more than a billion Catholics around the world.

He didn’t elaborate how the church would specifically respond to the Truth and Reconciliation Commission.

The Truth and Reconciliation Commission, which published 94 calls to action in its 2015 report, includes among them a papal apology for the church’s role in residential schools — to be delivered in Canada.

The Pope’s apologies, however, have so far fallen short of recognizing the church’s role, focusing only on some members of the church who were responsible for abuses.

Trudeau reminded the crowd he went to the Vatican five years ago to talk with Francis about reconciliation.

“As Your Holiness has said, begging pardon is not the end of the matter. It is a starting point,” Trudeau said, adding reconciliation is “not a single act but a lifetime journey of healing.”

After nearly two full days in Quebec, Francis is scheduled to fly to Iqaluit on Friday.

He is expected to meet privately with Inuit survivors of residential schools, then speak to the public at a community event in front of Nakasuk elementary school.