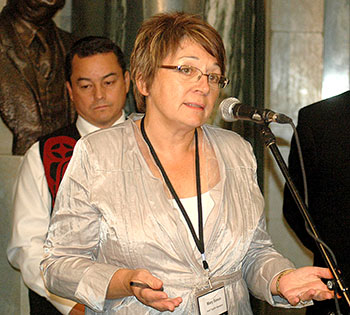 Canada’s provincial and territorial premiers — including Nunavut premier Eva Aariak — have committed to set up a working group with leaders of Canada’s national aboriginal organizations to address their concerns across the country.

“We wanted a first ministers working group on aboriginal issues and we got it,” Aariak told Nunatsiaq News in a telephone interview from Regina at the end of the annual summer gathering of premiers, also known as the Council of the Federation.

The leaders of the national aboriginal organizations, including Mary Simon, president of Inuit Tapariit Kanatami, felt very encouraged about the meeting with the premiers, Aariak said.

“They felt their issues were understood.”

Aariak is the only Canadian premier who represents an overwhelmingly aboriginal constituency.

Though details are yet to be worked out, a spokesperson for ITK said the working group will probably include provincial and territorial ministers responsible for aboriginal affairs.

A statement from the Assembly of First Nations said the new Aboriginal Affairs Ministers Working Group would “begin working immediately to develop issues and interests towards a proposed First Ministers Meeting in November 2010.”

With this agreement, the premiers and aboriginal leaders have set in motion a process not unlike the one that led to the Kelowna Accord in November 2005.

Hailed as a breakthrough by aboriginal leaders at the time, that accord was the culmination of 18 months of roundtable discussions between federal, provincial and territorial governments, and aboriginal groups.

It would have committed $5 billion in federal spending over 10 years, with a major emphasis on improving housing, health care and education in aboriginal communities, and on improving relationships between the parties.

The Kelowna Accord was one of the last acts of Paul Martin’s Liberal government, and one of the first things killed by the Stephen Harper Conservatives when they took over in January 2006.

At the preliminary meeting between the premiers and the national aboriginal organization leaders last week, both AFN Grand Chief Sean Atleo and Simon called on the premiers to establish the working group, with federal cooperation.

“All governments should agree to a comprehensive, transparent, meaningful federal-provincial-territorial-and-aboriginal process and agenda to explore the place of aboriginal peoples in our federation in the next 25 years,” Simon said in her address to the premiers.

Simon, recently acclaimed to her second term, and the newly elected Atleo, both indicated they were pleased with the outcome.

It’s an accomplishment that has taken more than five years of the national aboriginal leaders showing up for preliminary meetings with the premiers before each of the annual summer premiers’ gatherings.

Progress has been slow but incremental, and the premiers seem to be coming round to a recognition of the need to work seriously on aboriginal issues.

The premiers also agreed to continue cooperating on preparations for the H1N1 virus crisis — expected to ramp up again this fall — and concurred with aboriginal leaders’ calls to pay special attention to the needs of “vulnerable populations,” like the Inuit and the First Nations.

Aariak said she believes that the severe housing shortage in Nunavut, and a population significantly younger than the average in the rest of Canada, are the two major reasons the swine flu virus has spread more rapidly and extensively in the territory.

In an overcrowded house, she said, “if one gets sick, others will.” She added that the virus seems to be hitting a younger population than the seasonal flu, and young people constitute the majority in Nunavut.

Other concerns for Inuit that Simon highlighted with the premiers included education and skills training, economic development, land-claims implementation, and removing duplication from regulatory reviews on major resource development projects.

The Council of the Federation meeting proved such a love-in that Aariak found herself moved to apologize at the end of it for not having some controversy to offer reporters.

“I feel optimistic,” she said, both about the meeting, and about prospects for tackling issues of importance to Nunavut and the Inuit.

She described the premiers as cordial, professional and seriously interested in engaging in the issues.

She said she was confident Nunavut’s concerns were heard at the meeting, but added that “I was right there. If I felt my voice wasn’t being heard, I would have just continued to talk until they heard me.”