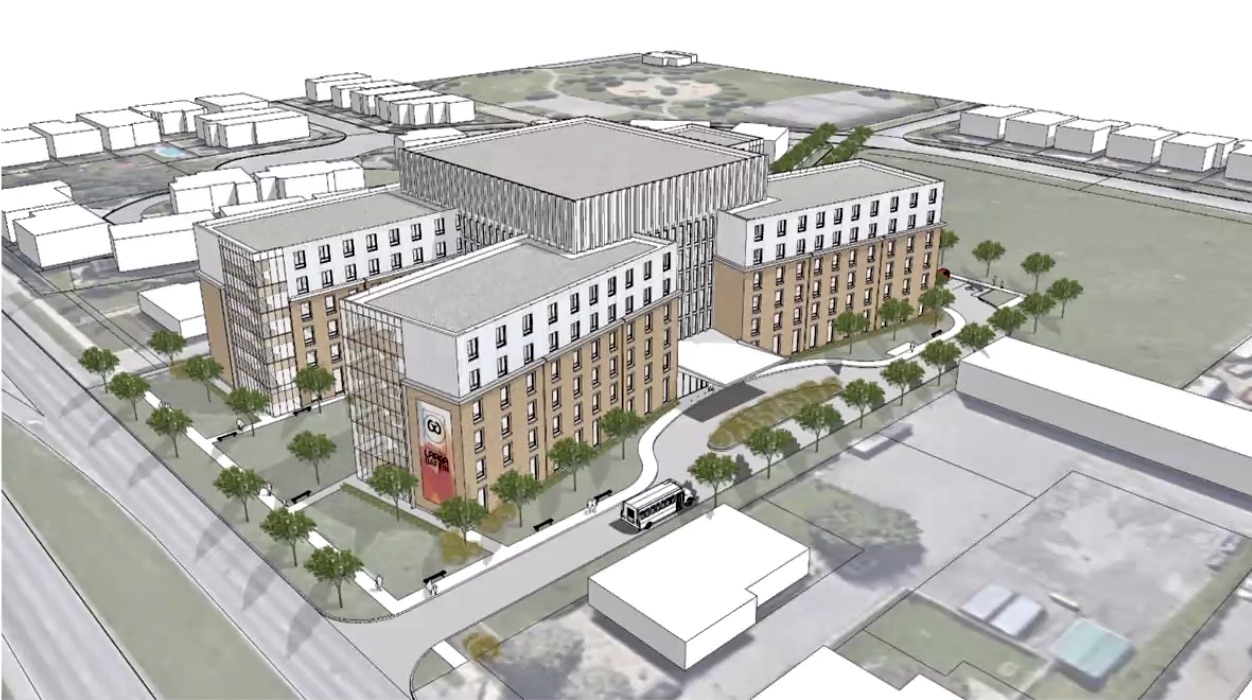 An architectural drawing shows the proposed six storey, 220-room design of a new Larga Baffin facility in Ottawa’s Hunt Club neighbourhood. The city’s planning committee is set to make a recommendation to city council on Thursday to approve or reject the proposal. (Image courtesy of DTAH Architects)

Ottawa’s city planning staff is recommending a proposal to build a new Larga Baffin facility be approved by the municipality’s planning committee.

The committee meets Thursday and based on the planning staff report as well as community feedback, it could decide to recommend city council either approve or reject the proposal. Committee members could also send the matter back to staff for more study.

Larga Baffin is a boarding facility for Nunavummiut receiving specialized medical care in Ottawa, including treatment for cancer, high-risk pregnancies and other services not easily accessible in Nunavut.

The facility offers temporary accommodation, meals, transportation and other logistical support services to visitors as they receive medical care in the city.

Thursday’s committee meeting is expected to include a discussion of Larga Baffin’s application for an official plan and zoning bylaw amendment to allow development of a six-storey, four-wing facility on Hunt Club Road and Sieveright Avenue in Ottawa’s South Keys area.

It would be the first purpose-built facility for Larga Baffin, which has operated out of three locations around Ottawa since first opening its doors in 2000.

Its current location on Richmond Road can accommodate 195 visitors. The new one, if approved, would have room for 350 visitors and be closer to the airport and other medical facilities.

City councillor Diane Deans — who is not a planning committee member but represents the ward where the new Larga Baffin would be built — said in an email to constituents she plans to ask for a number of changes based on community feedback.

Deans said she’s against the proposed six-storey, 22-metre height, preferring to cap it at 18 metres and four storeys. She also opposes the location of a driveway entrance at Sieveright Avenue, which she believes will bring institutional traffic into the residential area.

For a section of the lot that will be left vacant, Deans said she supports designating it for future residential use rather than redevelopment, and she’s calling for enhanced greenspace around the facility.

“I am generally supportive of Larga Baffin locating on this site and look forward to a long-lasting relationship with the organization and the residents that make use of this facility. However the size and scale [are] excessive and changes are necessary,” Deans said in the planning staff report.

“My goal is to ensure that this facility, in its final form, is compatible with the existing residential neighbourhoods and that community concerns are addressed.”

In April, Deans hosted an online public consultation meeting between representatives of Larga Baffin and area residents that drew more than 265 attendees.

According to the staff report for Thursday’s meeting, approximately 350 comments were submitted during the application review process, with 100 generally in support and 250 opposed based on height, traffic, density, sun shadowing and design concerns.

“While many of the concerns raised will be addressed during the site plan process, I felt it necessary to raise these concerns now as the community is looking for some assurance from the applicant that these issues are being looked into and that solutions are being sought,” Deans said in the report.

The planning committee will meet at 9:30 a.m. Thursday. The public can watch the meeting live on the Ottawa city council YouTube channel and can view the agenda on the city’s website.

Members of the public can also register to speak at the meeting by emailing committee coordinator Kelly Crozier at Kelly.Crozier@ottawa.ca.